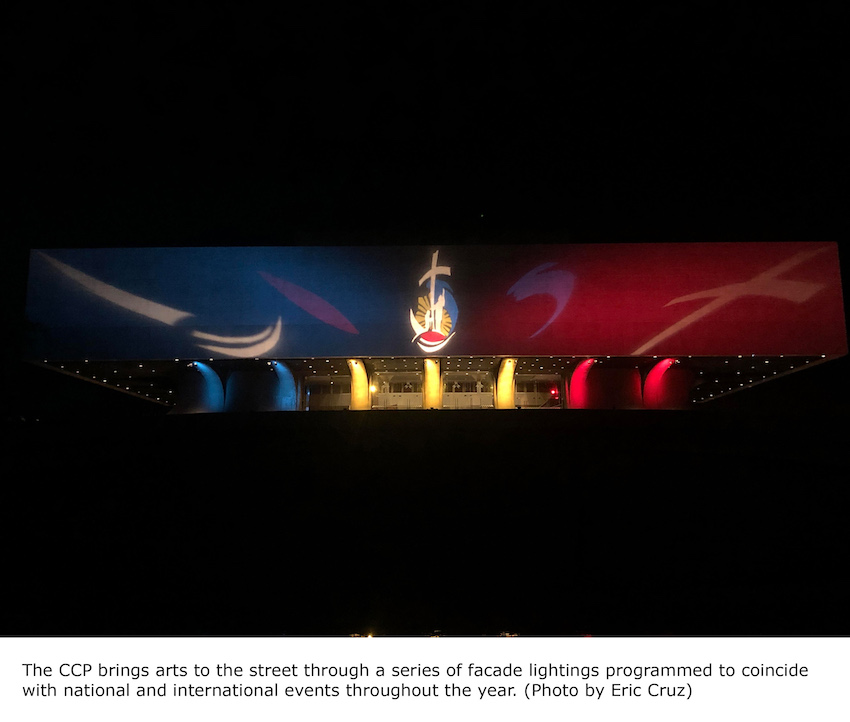 Although the Cultural Center of the Philippines theaters remain closed since the imposition of the lockdown last year, the premier art institution in the Philippines has not ceased to fulfill its mandate to make arts matter to the lives of every Filipino.

In fact, the Center has been busy mounting shows, productions, workshops and what have you via the digital platforms. And starting this month, everyone can stand in front of the CCP Main Building and see creativity unfold.

The CCP Production Design and Technical Services Division (PDTSD) brings arts to the street through a series of facade lightings programmed to coincide with national and international events throughout the year.

As part of the “Tuloy Po Kayo: Palihan, Palabas at Palitan,” the CCP online multi-arts open community festival, the CCP facade will light up with the “Gifted to Give” logo of the Catholic Bishops’ Conference of the Philippines.

The CCP created a rendition of the quincentennial logo using theater lighting equipment, which will be projected on the main building facade starting March 19 until April 4, from 6 to 9pm.

Designed by Bro. Edilberto Dinio, the logo was released to celebrate the 500th anniversary of Christianity in the Philippines. It features different elements including the “First Baptism in the Philippines” artwork by National Artist Fernando Amorsolo; a Cross depicting Magellan’s cross; the Ship signifying the navigators of the Spanish expedition; and, the Hovering Colour of Blue showing various religious symbolism, among others.

The facade lighting, in a way, is a reminder that CCP remains steadfast, resilient and forward-moving amid the pandemic, that the institution is still the lead institution in promoting and developing Philippine arts and culture no matter what the circumstances are.

For the CCP rendition of the logo, light designer Danny Villanueva divided it into different elements – the human figures with the cross and the boat, the colors blue and red, and the sun.

These images were transferred into heat-resistant aluminum sheets to create gobos, a metal template where the light passes through to create patterns and images.

Gonzales: We Will Not Celebrate 'Discovery of the Philippines'

Cinemalaya navigates the currents on its 17th year

Cultural Center of the Philippines names 13 Artists Awardees for 2021