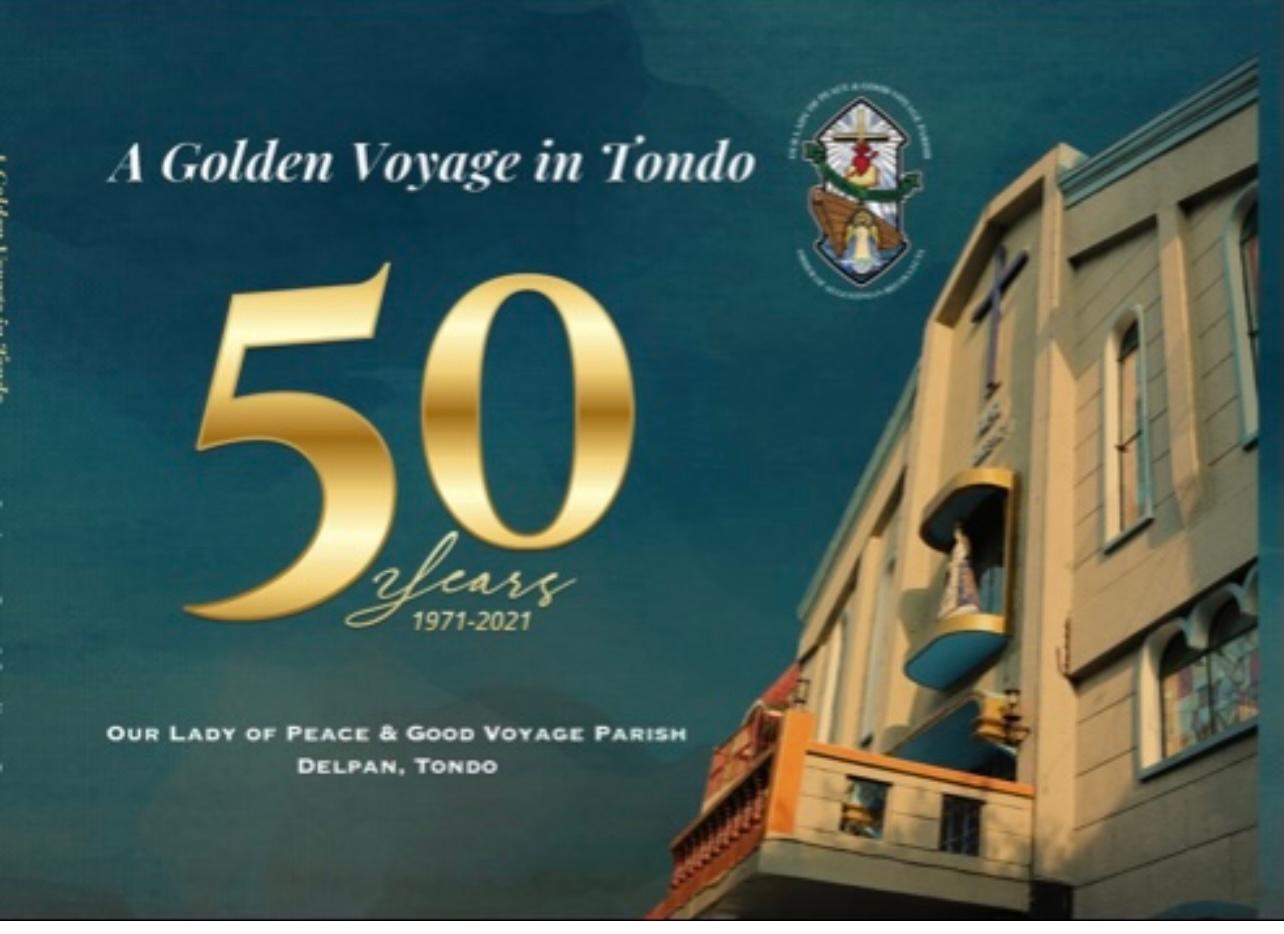 Our Lady of Peace and Good Voyage (OLPGV) Parish will launch the coffee table book “A Golden Voyage in Tondo” today, September 18, to coincide with the pastoral visit to the OLGV parish of His Eminence Jose Cardinal Advincula, newly appointed Archbishop of Manila.

The book is authored by Melandrew T. Velasco and published by his outfit, Media Touchstone Ventures, Inc.

Its publication was commissioned by Engr. Rey D. San Gabriel and the San Gabriel family as a tribute to Mr. Clemente S. San Gabriel Sr. and Mrs. Amada D. San Gabriel who were among the first lay leaders of the OLPGV parish. The San Gabriel couple worked unceasingly to help the young parish not only in its ministries but also in finding the lot where the parish church now stands.

It was on 16 March 1971, exactly 450 years since Ferdinand Magellan and his expedition set foot on Philippine soil, that a new parish was established in Tondo, Manila’s most densely populated district.

It is a fitting name as the parish encompasses 24 barangays including the North Harbor where sea vessels dock to load and unload cargoes and passengers bound for other destinations.

Tondo also had a reputation in earlier years as a place where peaceful and tranquil times were few and far between and troublemakers abound.

The parish is unique among other parishes in the country.

Its establishment was inspired by the wish of Pope Paul VI, the first Pontiff to visit the Philippines, that a new parish be created to take care of the residents who swarmed the streets of Tondo just to get a glimpse of the Pope in 1970. Another Pontiff, Pope John Paul II, visited the parish church while construction was ongoing and blessed its site during his first visit to the country in 1981. OLPGV parish holds the distinction of being the only parish in the country touched and blessed by two popes who are now venerated as Saints. 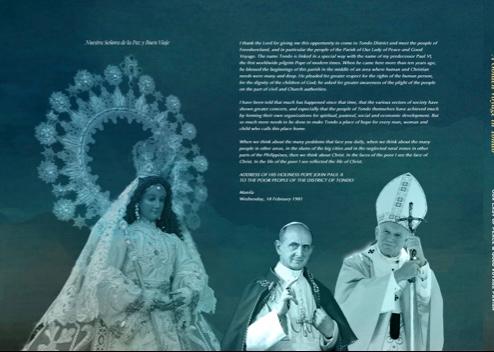 The book chronicles the transformation of the young parish in 1971 to the vibrant community that it is today.

From its cradle in a former public bath and toilet facility at the corner of Mithi and Matimtiman Streets, the author presents how it has made headway and was able to establish a beautiful parish center—the Our Lady of Peace and Good Voyage Parish Church at Delpan, Tondo.

While it took some time for the parish church to be completed, there was no doubt that among its parishioners that it could be done. Every one pitched in whatever he could give—money, time, and effort. These struggles and triumphs are retold in the pages of the book.

Aside from milestones of the parish that are tackled in the book, a chapter is devoted to the Order of the Augustinian Recollects (OAR) who zealously administered the parish. For Parish priest Fr. Jorge D. Peligro, OAR, the best is yet to come.

Parishioners share their life journey nourished by the goodness and love of God in the chapter Testaments of Faith, Love and Service through Mary.

Of course the colorful history of Tondo is included in the book. Tondo remains very relevant in the country’s cultural, economic and political history. Aside from hosting the Manila North Harbor, it has produced eminent sons and daughters like Manila Mayor Isko Moreno, SMC President and CEO Ramon S. Ang, National Artists Rolando Tinio and Levi Celerio, among others.