Latest research says fewer Filipino couples are getting married, even more so when it comes to a church wedding. Still, a church wedding is an ideal choice, in a country populated predominantly by Catholics. Whether you want something nature-inspired, history-laden, or something downright otherworldly, you will find a church that can match your dream wedding. The end goal? Of course, a beautiful start to your happily-ever-after. Here is a list of the top churches to get married in the Philippines.

01 SPOUSAL OF MARY AND JOSEPH CHAPEL
Talisay, Batangas
With just the church’s name, who would not want to get married in here? Tucked away on the outskirts of the Club Balai Isabel Resort, the Spousal of Mary and Joseph Chapel is a magnificent church for couples who seek a tranquil setting for a solemn wedding. The wood and cement façade complements the peaceful garden, with a stone fountain strategically located in front of the church. The chapel features exquisite interiors with its high white ceilings, stained glass windows and open side walls framed with wood. Natural lighting harmonizes with the beautiful wooden interior as the sun’s rays beam into the chapel’s windows. To add to the overall historic feel, the ruins of a 17th-century church can be found right outside the structure. 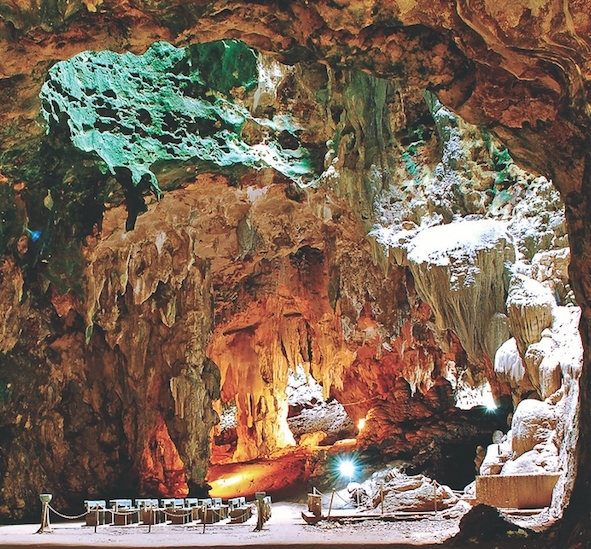 02 Callao Cave Chapel
Peñablanca, Cagayan
Callao Cave is the go-to place for an unearthly and spellbinding kind of wedding. The structure, made from natural rock formations, creates an otherworldly ambiance. The Callao Cave Chapel is the main draw of Peñablanca’s Callao Cave. The area is naturally illuminated by an large opening above. Its lighting comes from the natural roof crevice and with the addition of soft light from lamps, the effect is quite magical. (The wedding scene in local Filipino film The Mistress was shot here.)

03 Sto. Niño Chapel
Pagkilatan, Batangas
The Sto. Nino Chapel stands on a 2,000-square meter land as part of the peaceful and serene five-hectare land of Montemaria in Batangas City. The chapel is a replica of the Chapel of the Holy Infant Jesus in Prague, Czechoslovakia. Montemaria is strategically located 30 minutes away from the central district of Batangas City, and accessible by concrete and by the sea. The site is situated on a plateau overlooking the Verde Passage and the entrance of Batangas Bay. Montemaria is home to ninth largest statue in the World—the Statue of Mother Mary—the Mother of All Asia and Tower of Peace.

04 Manila Cathedral
Intramuros, Manila
Manila Cathedral is suitable for a classic Romanesque-Byzantine-themed wedding. This 444-year-old church, which has undergone numerous preventive repairs, has stood the test, not just of time, but also of catastrophes such as earthquakes, bombings, fires, and typhoons. This church — regarded as the premier cathedral and the Episcopal See of the Archbishop of Manila — is the most visited church in the Philippines’ capital city both by the locals and foreigners. 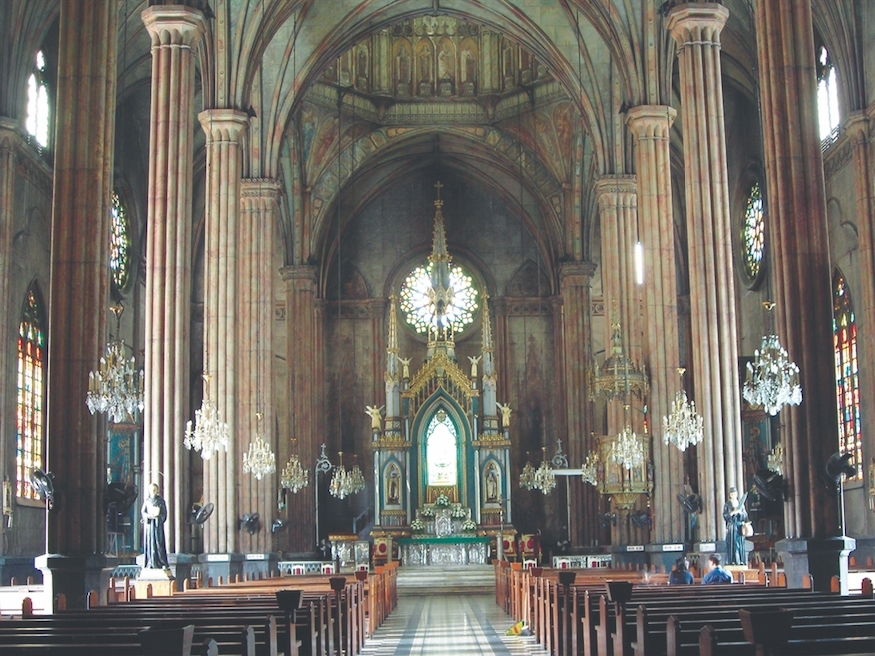 05 San Sebastian Church
Quiapo, Manila
The church was completed in the year 1891 and is a very popular destination known for its unique architectural characteristics. It is the example of Gothic architecture and is the only steel-made religious place in the Philippines. It was also declared as a UNESCO World Heritage site and historical landmark by the government of Philippines. It has been said that the church was reportedly designed by Gustav Eiffel, the man behind the Eiffel Tower in Paris. The structure was prefabricated in Belgium and it took six ships to ferry it to the Philippines.

06 San Agustin Church
Intramuros, Manila
Built between 1587 and 1606, San Agustin Church is considered the oldest church in the Philippines. The church is the only building that remained intact after the destruction of Intramuros during World War II. With its great historical and cultural merit, it was hailed a UNESCO World Heritage Site.  The church boasts of its massive, stunning Spanish-era architecture. The carved doors, chandelier, and paintings make for picturesque wedding photos.

07 Mt. Carmel Chapel (Tukon Church)
Basco, Batanes
If you want your church to be a forecast of your marriage, then consider holding it inside Mt. Carmen Chapel. Built as sturdy as possible using stone, storms could never put the church (or marriage, for that matter) down. The chapel also offers an overlooking view of the gentle slopes of Basco’s sprawling hills and soft curved-mountains. The church was a dream-come-true of the family of former Congressman and Budget Secretary Florencio “Butch” Abad for the people of Barangay Tukon, a highland village of Basco. The chapel was built in late 2007 and publicly opened in 2008 in time for the wedding Julia Abad, Secretary Abads’s daughter.

08 The Minor Basilica of Our Lady of the Most Holy Rosary of Manaoag
Manaoag, Pangasinan
The church is one of the Philippines’ most-visited Roman Catholic Pilgrimage sites. Many people from across the Philippine archipelago come and visit the town of Manaoag, Pangasinan, where the statue of the Blessed Virgin Mary is enshrined. The church embodies Spanish-Romanesque architecture mixed with German and Italian Renaissance designs. A big octagonal dome surmounts at the point where the nave and the transepts converge forming a cruciform contour. The four-pillared façade is topped by the statues of St. Vincent Ferrer, St. Margaret of Hungary, St. Catherine of Siena and St. Dominic of Guzman. The walls of the shrine, meanwhile, bear giant murals, about the more famous miracles attributed to the Lady of Manaoag.

09 Transfiguracion Church of Calaruega
Nasugbu, Batangas
Situated at a garden-like setting atop a hill, Calaruega Church creates the perfect romantic ambiance for your wedding. It offers a stunning view of the small hills of Nasugbu and Tuy of Batangas and Mt. Batulao. Lush trees and a colorful variety of flowers accentuate the vicinity of the church. On top of this, the cool Tagaytay climate makes the place more serene and relaxing. Since the church is quaint, it is appropriate for an intimate guest list. An image of the Risen Christ, sculpted by Filipino artist Ben-Hur Villanueva in 1996, greets visitors outside the chapel. Its façade is a replica of the original chapel in Caleruega, Spain.

The Tradition of the June Bride

5 Breathtaking Honeymoon Destinations In The Philippines