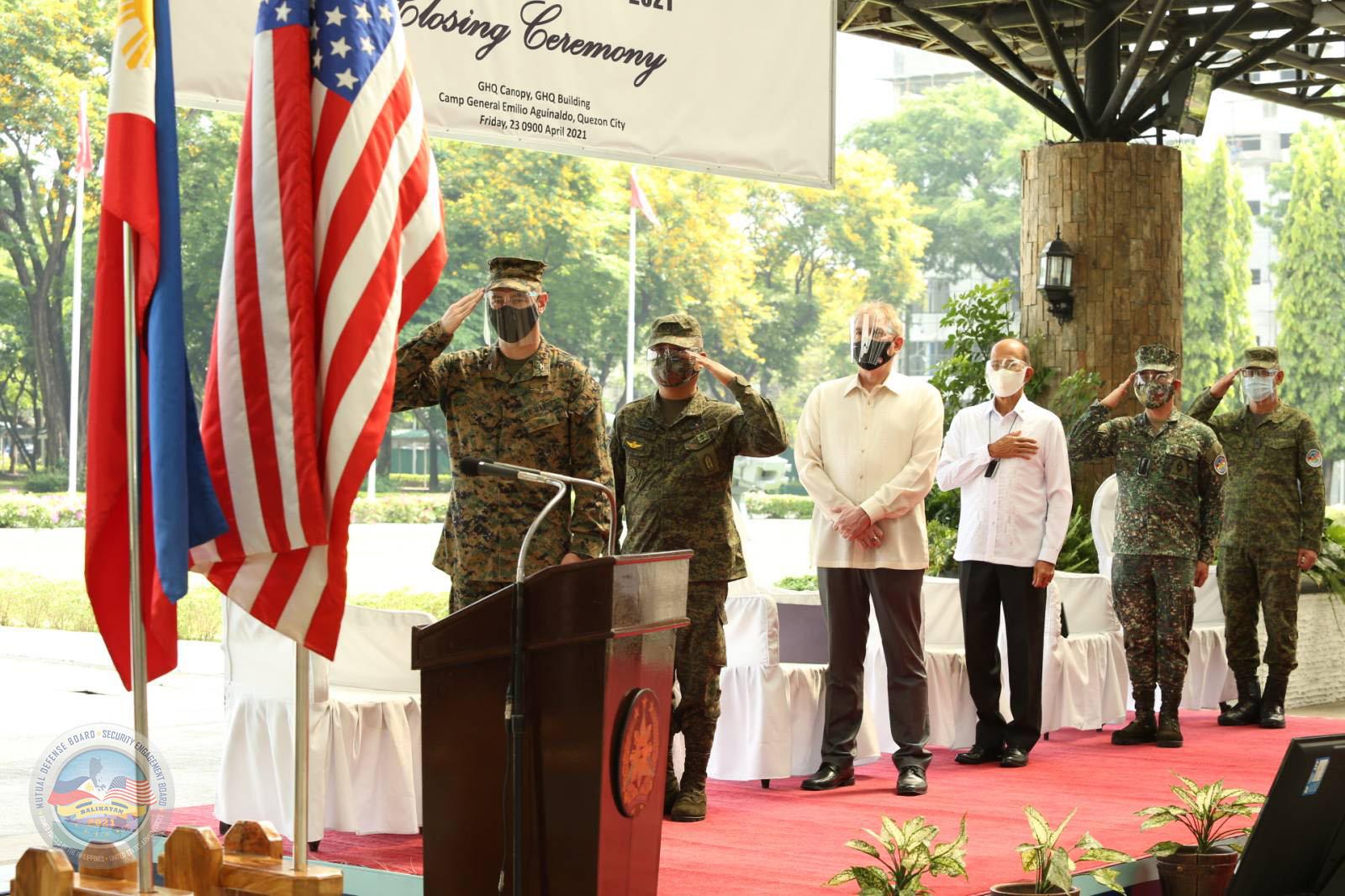 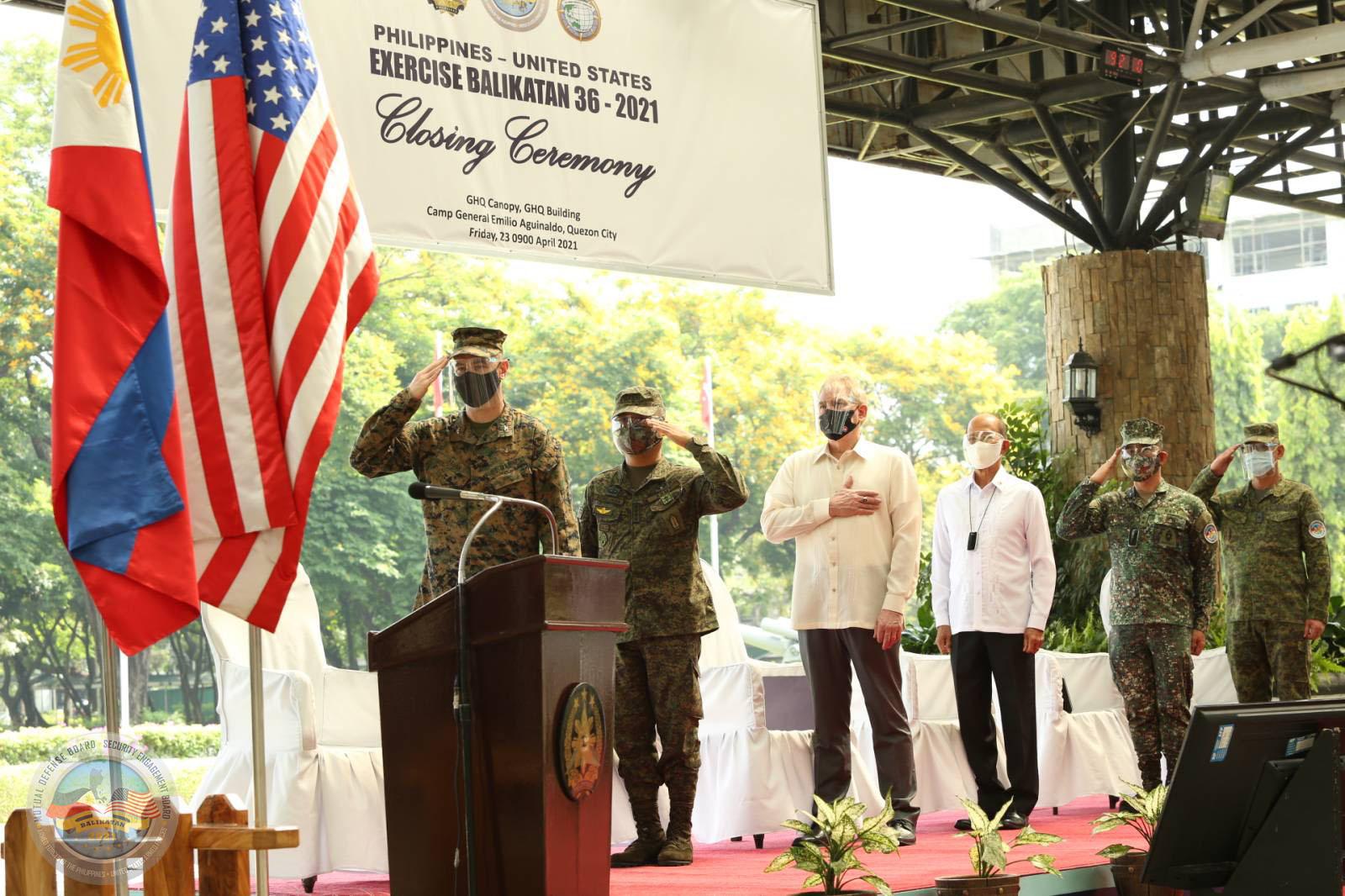 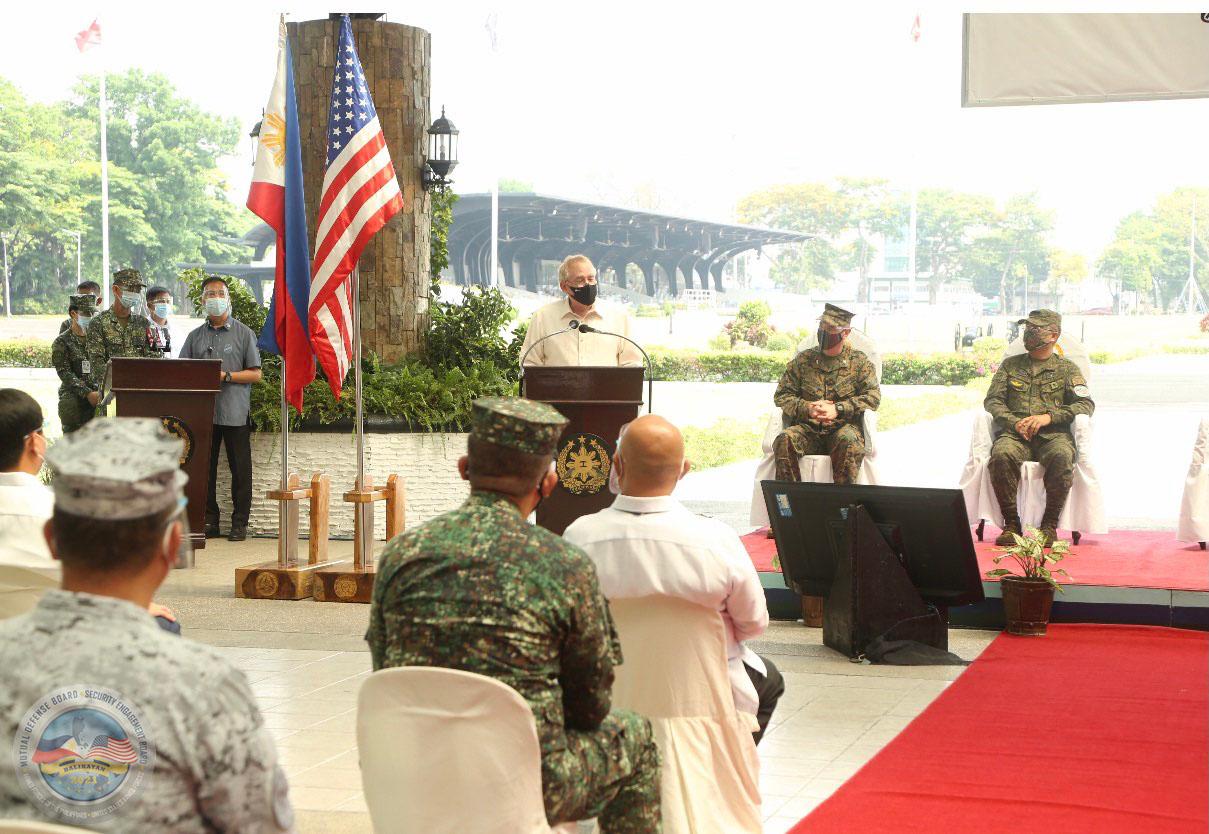 U.S. Embassy Chargé d’Affaires John Law graces the closing ceremony of Balikatan Exercise 2021. In his speech, he expressed the willingness of the U.S. government to continue advancing military-to- military partnership in pursuit of the shared commitment to mutual defense in a free and open Indo- Pacific. 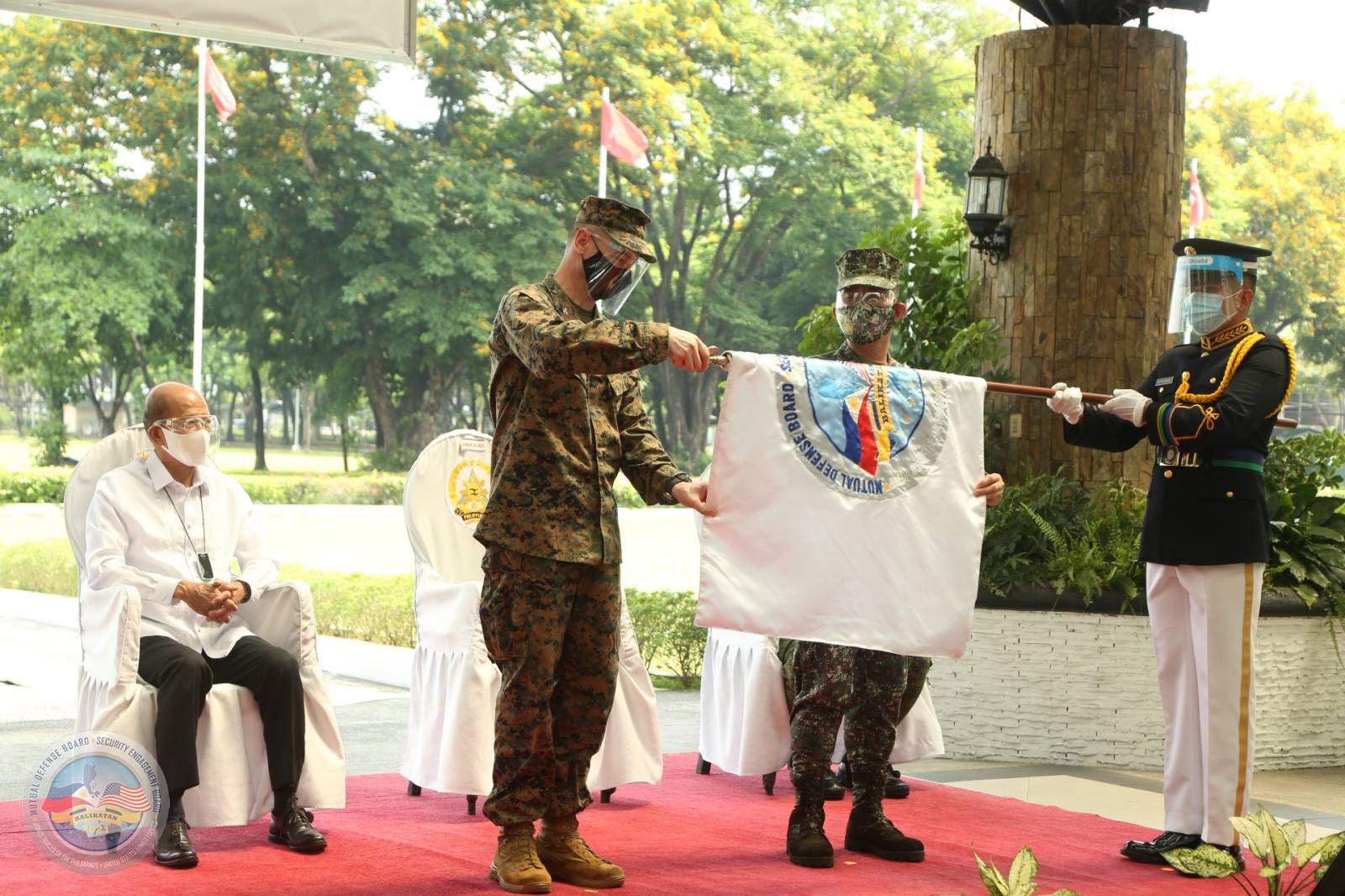 Colonel Aaron Brunk of the US 3rd Marine Expeditionary Force, Officer in Charge for Exercise Support Group and Major General Edgard A Arevalo, Commander of the AFP Education Training and Doctrine Command and this year’s Exercise Director furl the Balikatan Exercise Flag symbolizing the official closing of the annual military training. 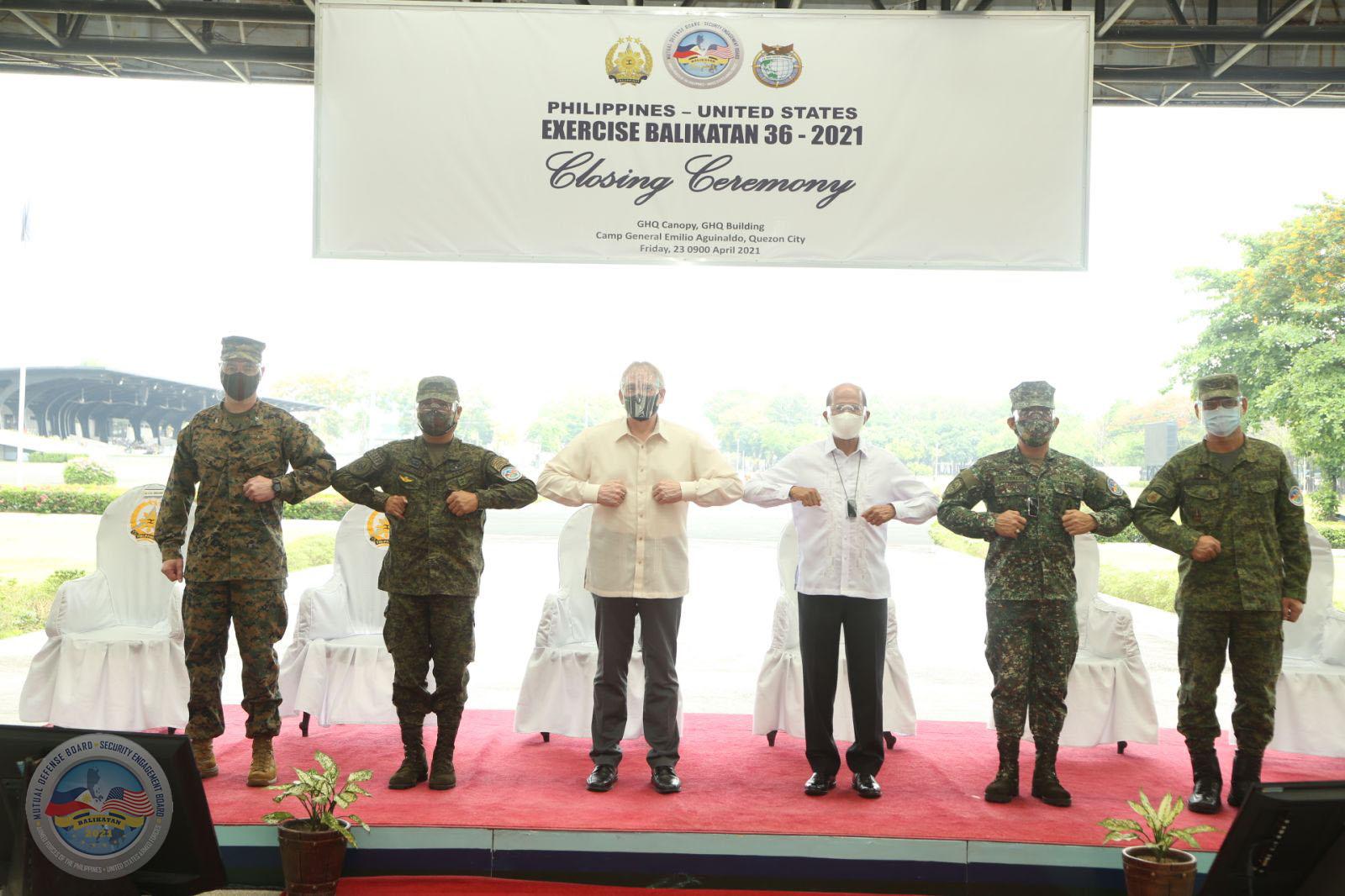 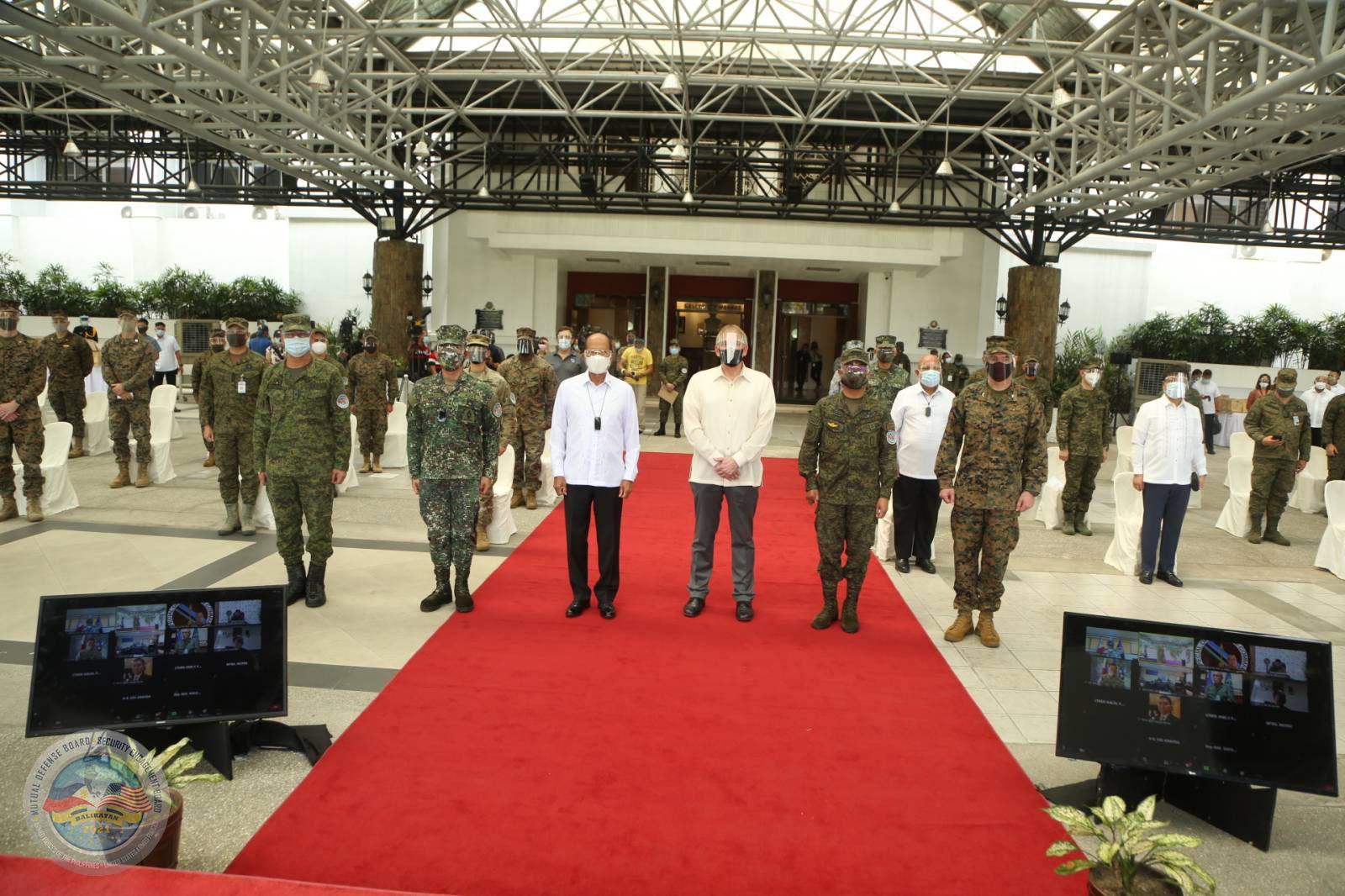 Attendees of the 36th Balikatan Exercise Closing Ceremony that was held in an open area, strictly observed social distancing in compliance with the guidelines set by the National Inter-Agency Task Force on Emerging Infectious Diseases (NITF-EID). 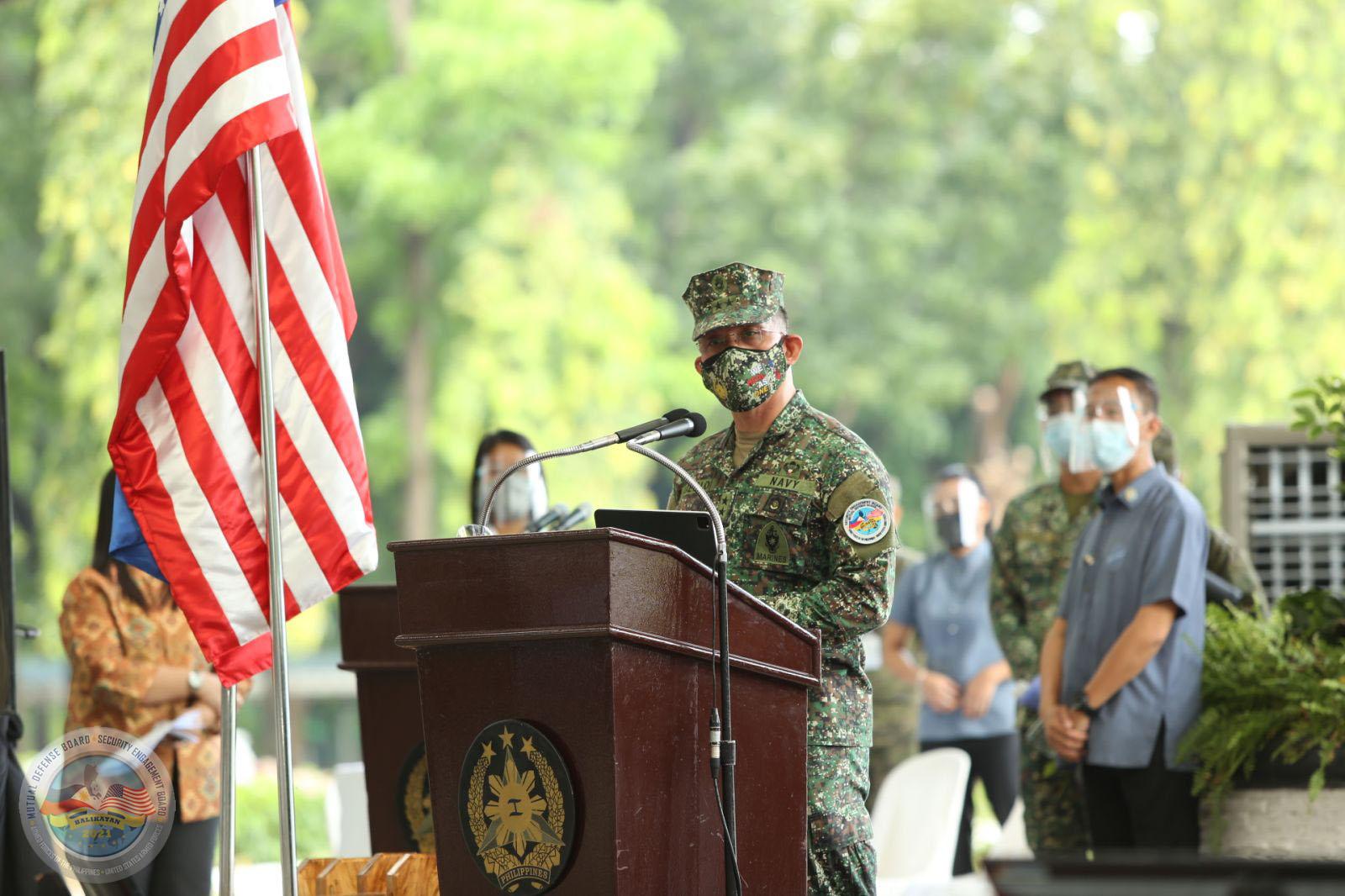 Major General Edgard Arevalo, the Exercise Director for Balikatan Exercise 2021 in his speech said the participants of this year’s military training greatly benefitted in terms of exchange of knowledge, and cooperative activities aimed at better enhancing both militaries’ capabilities. 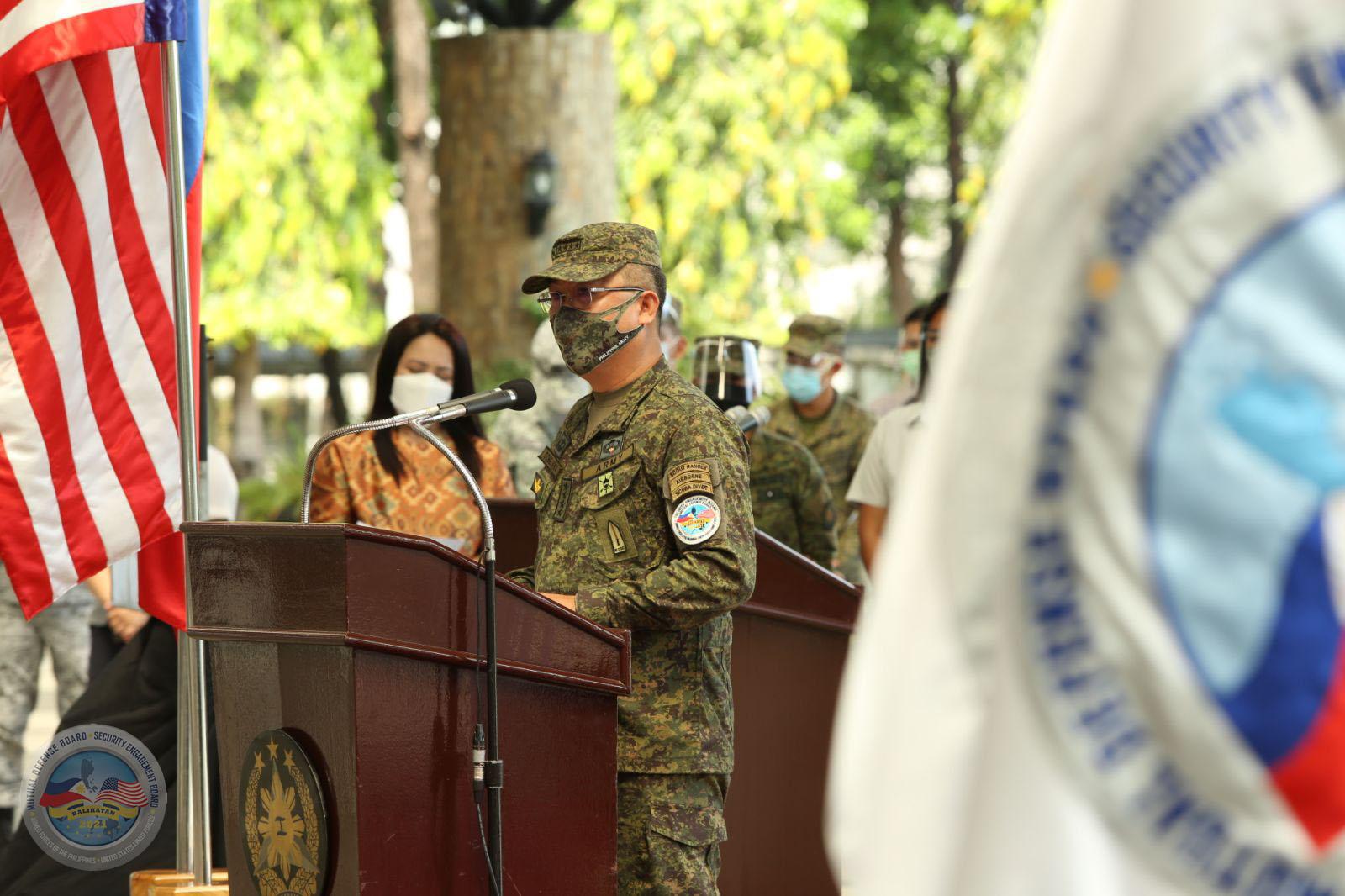 AFP Chief of Staff General Cirilito Sobejana in his speech said he is confident that training exercises like Balikatan will make a huge impact in the military’s campaign against non-traditional threats that are persisting in the Philippines. 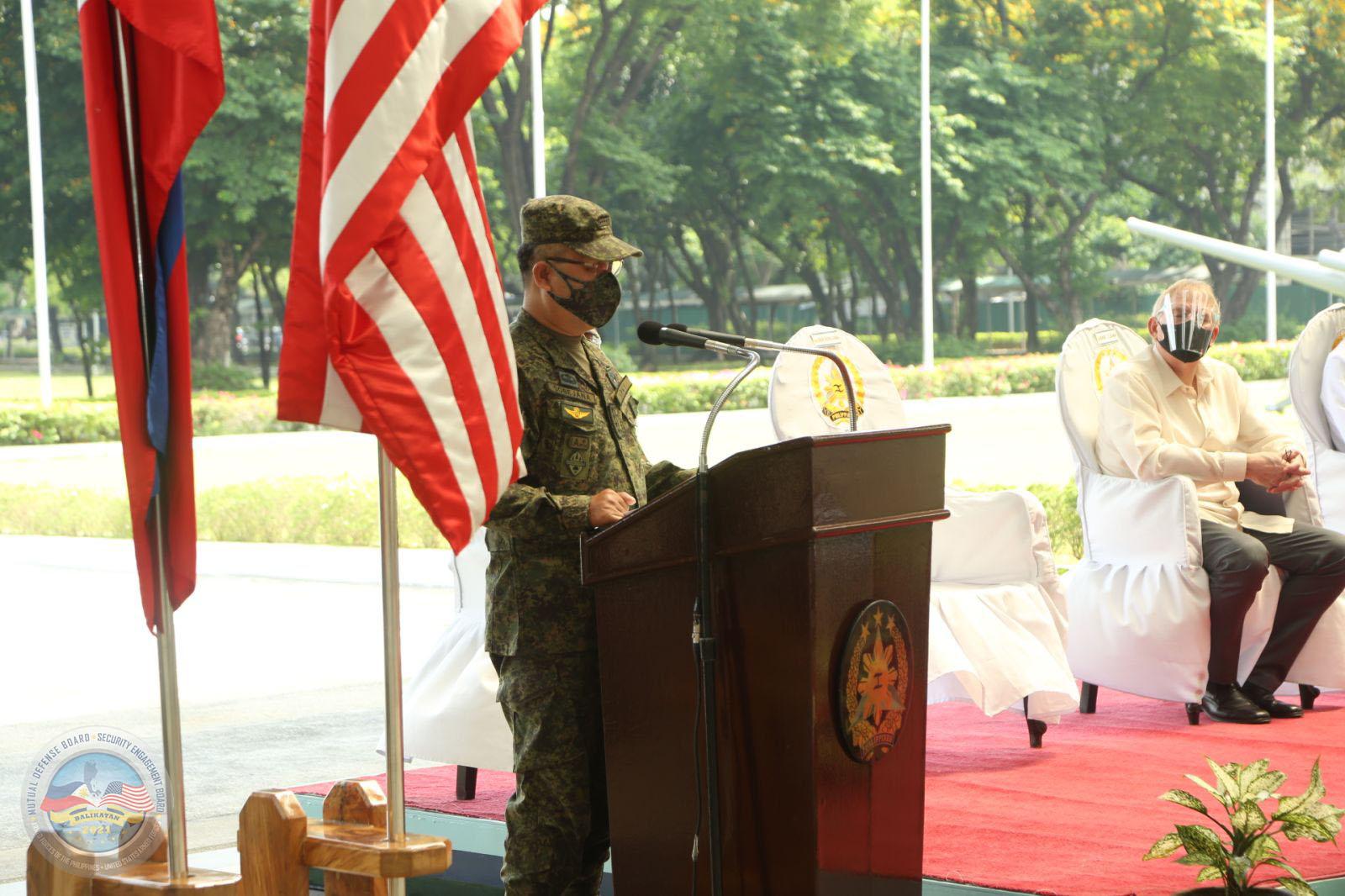 CAMP AGUINALDO, Quezon City, Philippines – Service members from the Armed Forces of the Philippines (AFP) and United States Armed Forces concluded the 36th iteration of Balikatan Exercise on Friday, April 23 with a simple ceremony held at the General Headquarters at Camp Aguinaldo in Quezon City.

“The successful conduct of this year’s Balikatan Exercise 36-2021 has definitely brought us a step closer towards our goal of capacitating our forces, and as such, will consequently contribute to the peace and stability of the Indo-Pacific Region,” said AFP Chief of Staff General Cirilito Sobejana.

The Chief of Staff was joined by the Secretary of National Defense Delfin Lorenzana; U.S. Embassy in the Philippines Chargé d’Affaires John Law; Major General Edgard Arevalo, the Commander of the AFP Education Training and Doctrine Command and this year’s Exercise Director; Brigadier General Fernando Reyeg, Assistant Deputy Chief of Staff for Training and Education and Assistant Exercise Director of BK36- 2021; and Colonel Aaron Brunk of the U.S. III Marine Expeditionary Force, Officer in Charge for Exercise Support Group.

“Despite the challenges of the COVID-19 pandemic, both Filipino and American forces were able to achieve the objectives of this year’s Balikatan Exercise – to train together on defense and security efforts, leveraging on the capability, experience, and strength of both militaries’ longstanding friendship,” Major General Arevalo said.

Due to the global health crisis, the magnitude of Balikatan 2021 was scaled down both in numbers of events and participants. Approximately 225 U.S. military personnel and 415 AFP personnel participated; all of whom strictly followed health and safety protocols.

“Balikatan showcases the strength and resolve of the Philippine-U.S. alliance,” said U.S. Embassy Chargé d’Affaires John Law. “These exercises demonstrate and improve our ability to jointly respond to crises. But training is never over. We will continue to advance our military-to-military partnership in pursuit of our shared commitment to mutual defense in a free and open Indo-Pacific.”

The Exercise also included Humanitarian and Civic Assistance activities, which began on March 26, prior to the opening of the exercises. Philippine and U.S. service members completed the constructions of two classrooms and a daycare center in Plaridel, a classroom in Atimonan, and a health clinic in Mauban, all of Quezon Province.

“The 36th Balikatan Exercise brought together AFP and U.S. Armed Forces amidst the challenge of a never-before-experienced health emergency. Our participants greatly benefitted from trainings, exchange of knowledge, and cooperative activities aimed at better enhancing our capabilities,” Major General Arevalo said.

Secretary Lorenzana on the other hand recognized the continuous commitment to the longstanding alliance of the Philippines and the U. S. Government.

“Allow me to convey my gratitude to the U.S. Government, represented here by Mr. John Law, for its unwavering support to this annual exercise. I am likewise grateful for your constant and continued assurance of the ironclad commitment to our Mutual Defense Treaty,” said the Defense Secretary.

Balikatan, which means “shoulder-to-shoulder” in Filipino, embodies the alliance and friendship between the Philippines and United States. The exercise officially opened on April 12 and was conducted in Northern and Southern Luzon for two weeks.

Board of Investments approves agriculture and power projects worth P2.8B, to boost the growth of the resource-based sectors

Department of Tourism: WWII Memorial, a beacon to the world