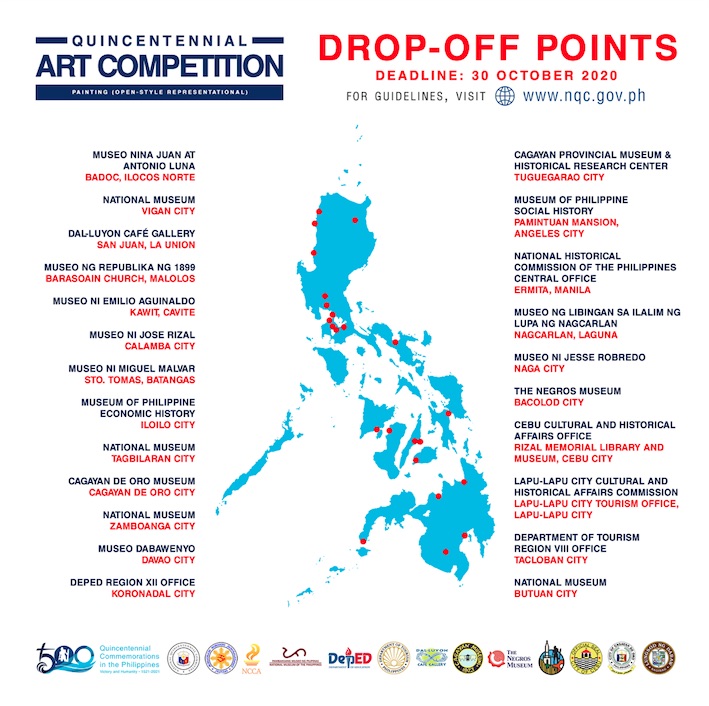 The National Quincentennial Committee (NQC) heeded the recommendations from various artists in the provinces to open drop-off points in several places for the Quincentennial Art Competition. 23 museums and offices across the country joined forces in easing the burden of the visual artists in shipping their entries. Over two million pesos are at stake for winning artists in four categories. Details, guidelines, and forms are accessible through https://nqc.gov.ph/en/quincentennial-art-competition.

National Museum of the Philippines’ satellite branches in Vigan, Tagbilaran, Zamboanga City, and Butuan are now accepting entries to the competition. The Department of Tourism Region 8 Office in Tacloban and the Department of Education Region 12 Office in Koronadal joined the league.

Private institutions enthusiastically opened their doors to interested artists in their localities: Dal-Luyon Café in San Juan, La Union and The Negros Museum in Bacolod.

Museums and galleries remain closed due to implementation of community quarantine across the country. Strict health protocols will be observed by the drop-off points. NQC requests the participating artists to contact first the point persons in the drop-off points before visiting. Contact details are also in the link provided above.

In 2021, the country will commemorate the Philippine part in the achievement of science and humankind in circumnavigating the planet for the first time. Central in this commemoration is the 500th anniversary of the Victory at Mactan on 27 April 2021. These and more are collectively known as the 2021 Quincentennial Commemorations in the Philippines by virtue of Executive Order No. 103 (2020). Know more about the event at www.nqc.gov.ph or follow the Facebook page @nqc2021.

Museums in NCR Plus to reopen on limited capacity