Every year, along the streets of Malaybalay, the seven hill tribes of Bukidnon gather to put on a one-of-a-kind spectacle

Daybreak that late March came with a balmy breeze and a sheen that made the streets shine like silver. The soft, hazy light made everything like a dream. The streets were already busy. On it, people in strange and colorful clothing huddled and milled about. Together they made a pool of hues, a giant iridescent puddle of greens, blues and bright, bright reds. It was a special day, for today was the most awaited part of the Kaamulan Festival, which means, in just a few moments, the streets of Malaybalay will come to life. 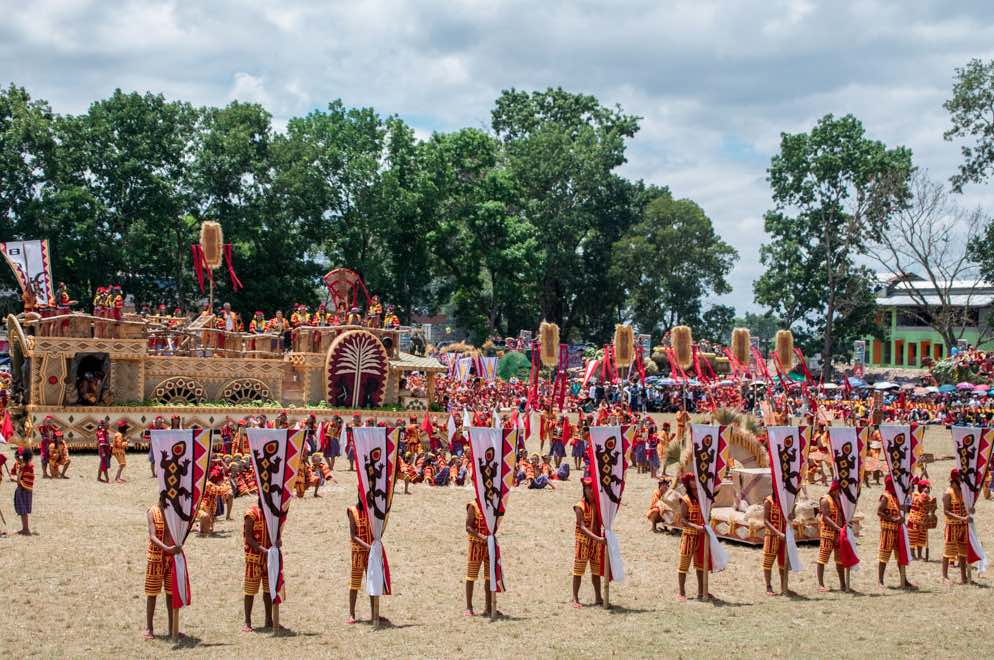 The festival’s origins are hinged on celebrating diversity. From the Binukid word “amul” which means “to gather”, the Kaamulan Festival began in the 70s when local leaders decided it was high time they put a spotlight on the province’s indigenous heritage. Its goal is mainly to bring together the seven original inhabitants of Bukidnon. These are the Bukidnon, Higaonon, Talaandig, Manobo, Matigsalug, Tigwahanon and Umayamnon. Over the years, the festival has earned praise for being the “most authentic” and only truly ethnic festival in the country.

It’s held usually throughout the month of March, culminating into the highly anticipated Civic Parade. Around half of Bukidnon’s 20 municipalities and 2 component cities participate every year, with the other half joining the next year.

As I waited for the main event to begin, I recalled last night’s Piniliyapan to pass the time. I thought, if the cultural performances there were any indication, I am in for a treat.

The dramatization of a portion of the epic Ulaging brought me half confused and half thoughtful, prompting me to learn more about this ancient tale. The accompanying voices of the Kalayag choir had helped with the imagery. At one point, I sobbed while watching a lady chant ancient words. I could feel her pride with every syllable. What’s more is that, at the end of the evening, everyone gathered for an “indigenous” dance party. I tried to join in, doing my best to follow the traditional dance steps which only looked easy. 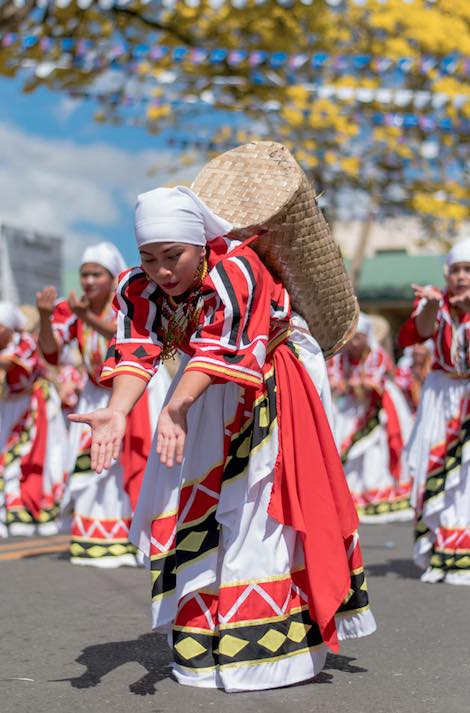 Suddenly, the sound of fireworks boomed all around, signaling the start of the spectacle. I walked down the main avenue and looked for a spot where I could watch while taking photos. All the while, I could feel the drumbeats rattling up my spine. I settled under the shade of golden trumpet trees, waiting for the procession to approach me.

Not long after, the pool of colors overflowed, inundating the silver streets with a flood of rainbow. The dancers stomped and gestured their way along, every move filled with meaning. The percussions rumbled ardently, as if to emphasize the meaningfulness of every routine. And meaningful they all were.

Each performance is derived from actual rituals sacred to the tribes. Sure, anyone was welcome to perform – young and old, even non-indigenous folks – but they must seek permission from the elders. Even the choreographers are required to show the routine prior for approval. This way, the dances remain as intact and as untainted as possible.

This is necessary, for the performances usually tell of the tribes’ creation myths and age-old legends. One contingent presented the tale of how a giant banog (Philippine hawk), with the help of baylans (healers), revived a datu’s (chieftain) heir after being bitten by a bunsalagan (lake spirit). Laaw – a towering dark spirit that gives favor to the people – was featured on another performance. 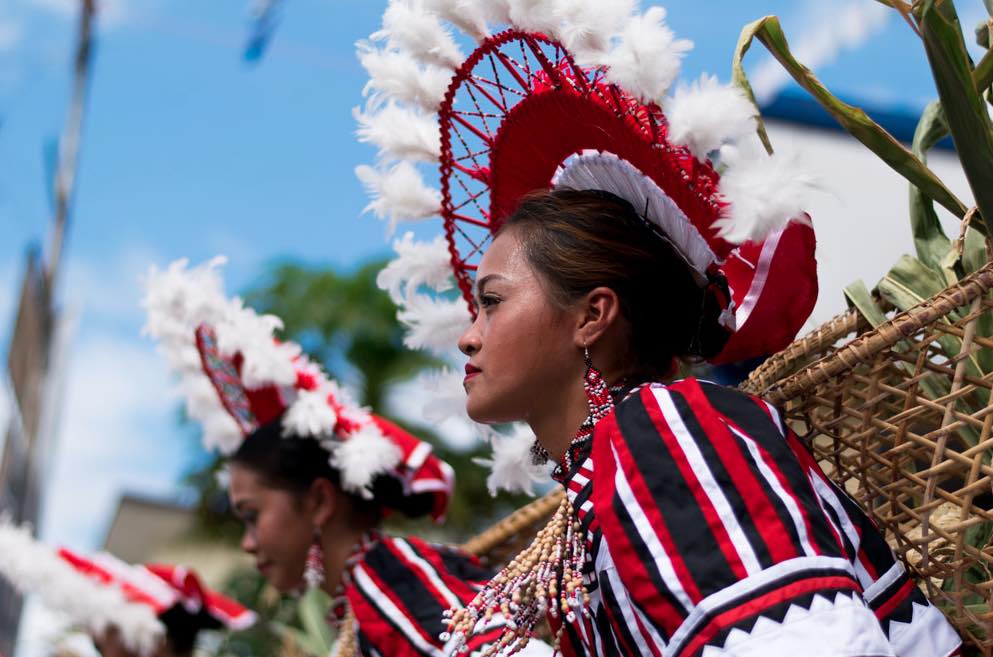 Animals sacred to the tribes are also incorporated to the dances. Movements that mimic horses, monkeys, and birds can be recognized in the routines. Prominent also are social interactions like courtships, weddings, and coronations. Daily life like fishing, planting and harvesting are also common themes. There are the war dances, too, that proudly showcase the fierceness of the tribesmen.

To be in the thick of it all, to simply be an audience, was mesmerizing. When I look at the performers’ faces, even amidst the strain of dancing in the heat, I could see the undeniable and unshakeable pride in their heritage. It is inspiring. Enviable to some extent. 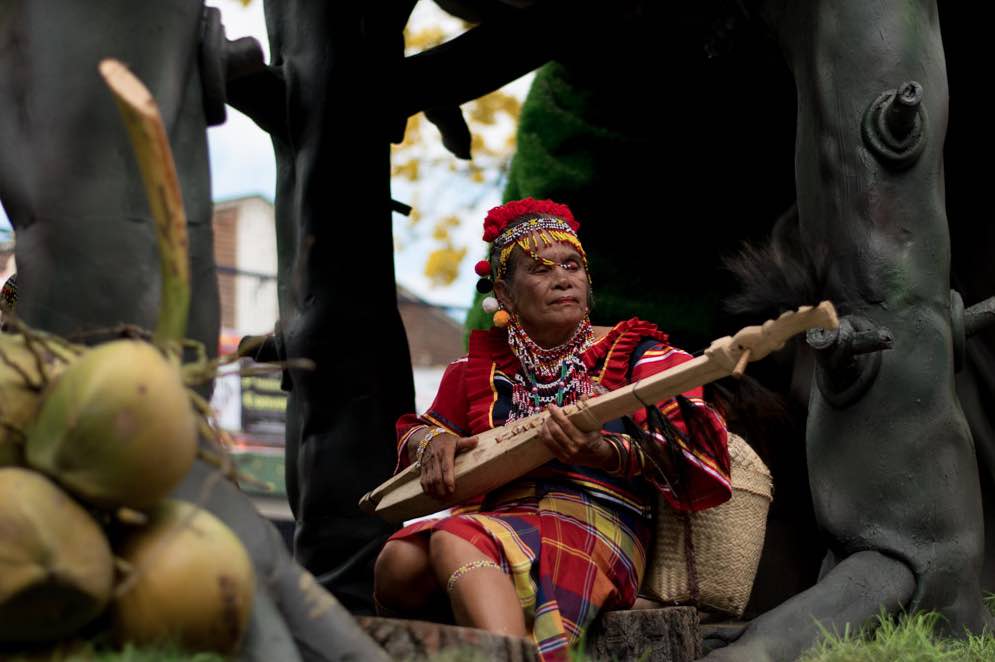 I remember what a friend of mine had told me the night before: Indigenous people have a strong sense of identity because most of them had remained unconquered by foreign forces. Unlike most Filipinos, they are not stuck in an existential battle of cultures and biases.

I came to see Kaamulan without any idea of what it was all about; with fresh eyes, if you will – without biases. To see this kind of presentation, to see something legitimately ours celebrated was a defining moment. No doubt, I may come see it again in the years to come, but feeling of seeing it for the first time would always be the most special.