Japanese Firms confident on investing in the Philippines

With health and safety measures in place, Coron set to reopen to tourists on December 1

More than 75,000 classrooms nationwide constructed by the Department of Public Works and Highways 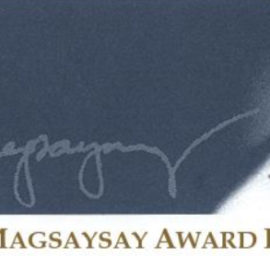 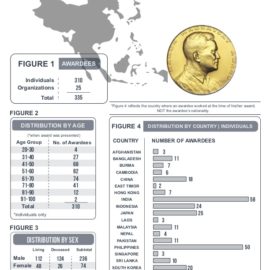 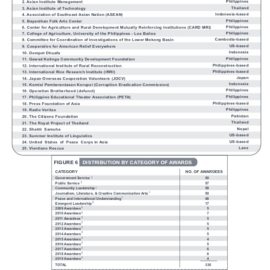 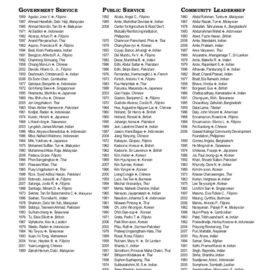 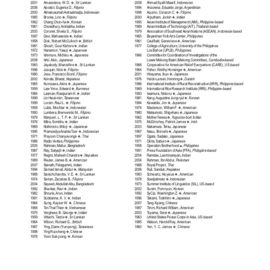 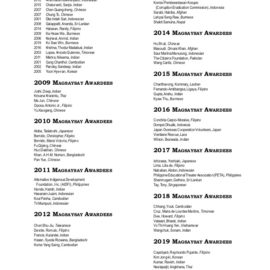 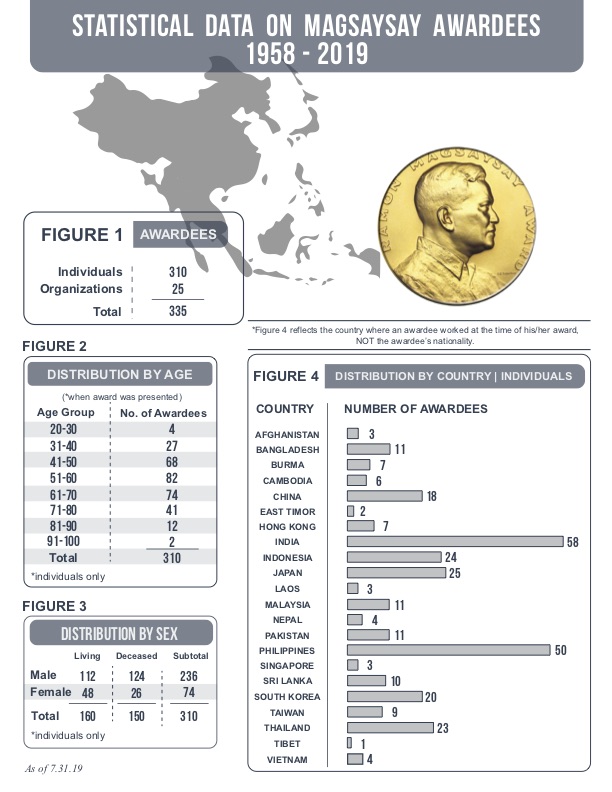 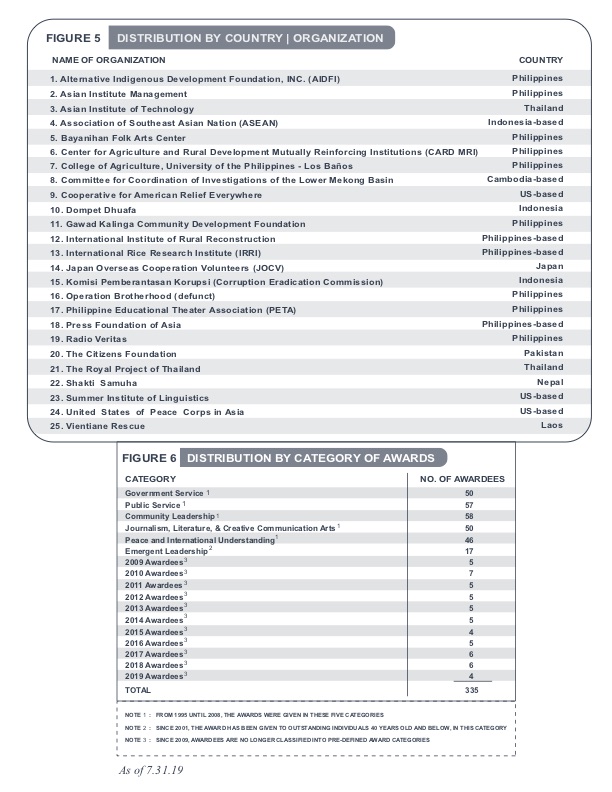 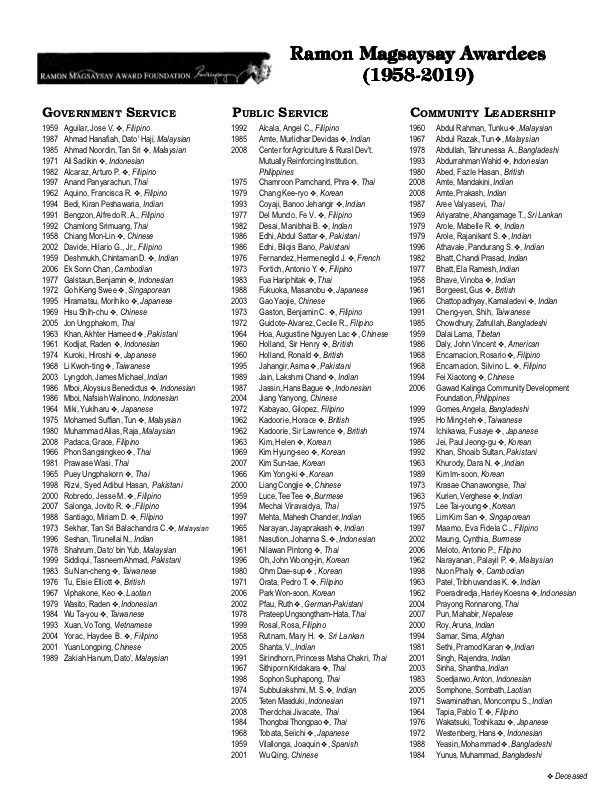 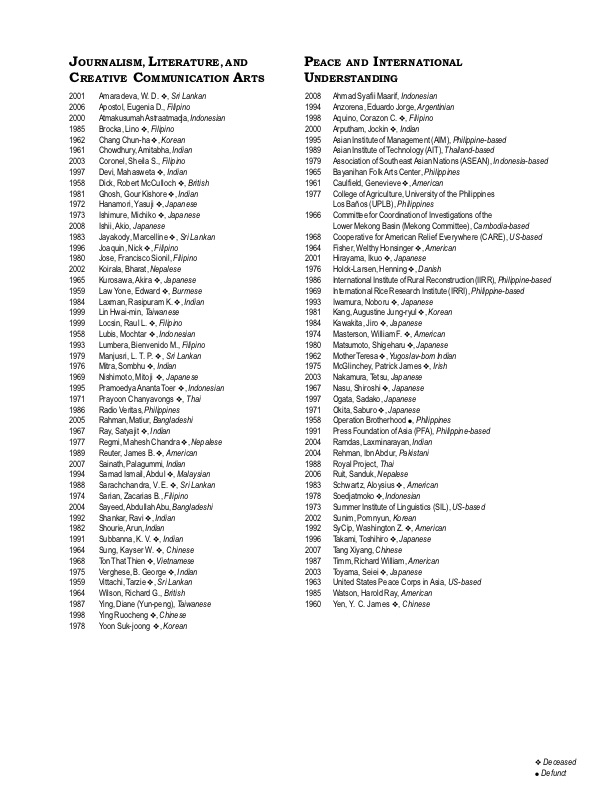 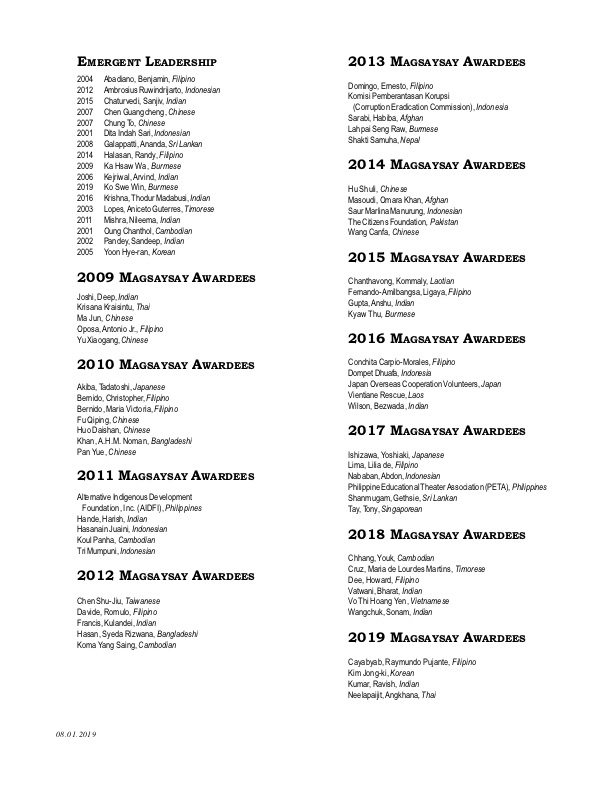 The 2019 Magsaysay Awardees are:

Kim Jong-ki, from South Korea. He is being recognized for “his quiet courage in transforming private grief into a mission to protect Korea’s youth from the scourge of bullying and violence, his unstinting dedication to the goal of instilling among the young the values of self-esteem, tolerance, and mutual respect, and his effectively mobilizing all sectors of the country in a nationwide drive that has transformed both policy and behaviors towards building a gentler, non-violent society.”

Ko Swe Win, for Emergent Leadership, from Myanmar. He is being recognized for “his undaunted commitment to practice independent, ethical, and socially engaged journalism in Myanmar; his incorruptible sense of justice and unflinching pursuit of the truth in crucial but under-reported issues; and his resolute insistence that it is in the quality and force of media’s truth-telling that we can convincingly protect human rights in the world.”

Ravish Kumar, from India. He is being recognized for “his unfaltering commitment to a professional, ethical journalism of the highest standards; his moral courage in standing up for truth, integrity, and independence; and his principled belief that it is in giving full and respectful voice to the voiceless, in speaking truth bravely yet soberly to power, that journalism fulfills its noblest aims to advance democracy.”

Angkhana Neelapaijit, from Thailand. She is being recognized for “her unwavering courage in seeking justice for her husband and many other victims of violence and conflict in southern Thailand; her systematic, unflagging work to reform a flawed and unfair legal system, and the shining proof she is that the humblest ordinary person can achieve national impact in deterring human rights abuses.”

Raymundo Pujante Cayabyab, from the Philippines. He is being recognized for “his compositions and performances that have defined and inspired Filipino popular music across generations; his indomitable, undeterred confidence to selflessly seek, mentor, and promote young Filipino musical genius for the global stage; and his showing us all that music can indeed instill pride and joy, and unify people across the many barriers that divide them.”

Established in 1957, the Ramon Magsaysay Award is Asia’s highest honor. It celebrates the memory and leadership example of the third Philippine president after whom the award is named, and is given every year to individuals or organizations in Asia who manifest the same selfless service and transformative influence that ruled the life of the late and beloved Filipino leader.

“The Magsaysay awardees of 2019,” says RMAF President Carmencita Abella, “all reflect courage undaunted, in their commitment to build solutions to vital and complex issues in their societies. Theirs is a moral courage that is unfazed d by repressive systems, or social divisions, or institutional resistance, or deep cultural prejudice, or even by the burdens of building the capacities of others. Embracing the challenges of their respective advocacies, these leaders take bold, creative, and empowering actions that engage others to do likewise. Perhaps the most powerful impact of their leadership can be seen in the heightened moral courage they have inspired among the many whose lives they have touched.”

She adds, “Their approaches are all deeply anchored on a respect for human dignity, and a faith in the power of collective endeavor. We draw much hope from the 2019 Magsaysay awardees, and have much to celebrate about their accomplishments and greatness of spirit.”

The five 2019 Magsaysay awardees join the community of 330 other Magsaysay laureates who have received Asia’s highest honor and premier prize to date. This year’s Magsaysay Award winners will each receive a certificate, a medallion bearing the likeness of the late President, and a cash prize. They will be formally conferred the Magsaysay Award during formal Presentation Ceremonies to be held on Monday, 9 September 2019 at the Cultural Center of the Philippines. The public is cordially invited to attend these Ceremonies.

60 Filipinos arrive home from India, repatriated by the Department of Foreign Affairs