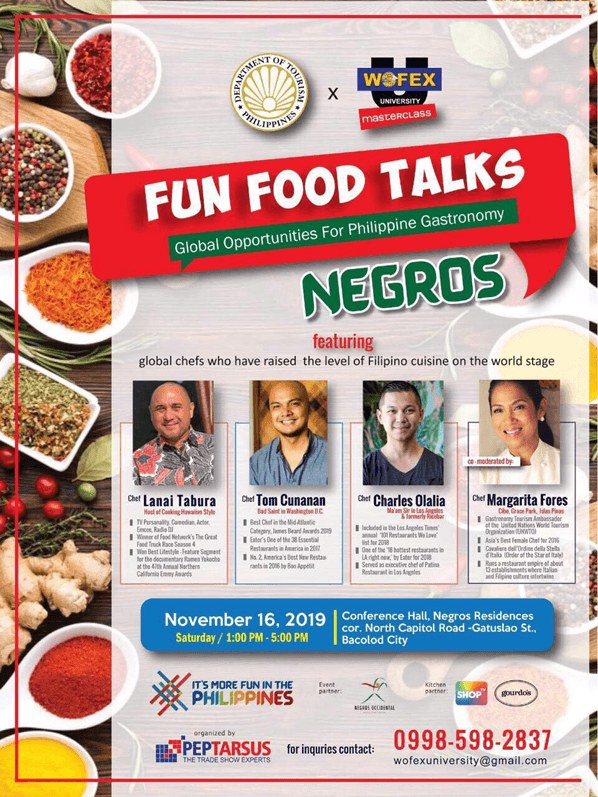 The gastronomic journey throughout the Philippines continues for Filipino-American (FilAm) Chefs Tom Cunanan and Grant “Lanai” Tabura, this time going to to Iloilo and Bacolod—two of the most exciting foodie havens tucked away in Western Visayas.

To amp up its efforts to bolster culinary tourism in the Philippines, the Department of Tourism (DOT) has invited Chefs Cunanan and Tabura to the Chefs’ Food Trip to the Philippines, a 2-week tour around the country’s most-popular culinary destinations, meeting seasoned Filipino chefs and learning about the richness of the Philippine culinary scene along the way.

Since November 10, Cunanan of Bad Saint (Washington D.C.) and Tabura, Winner of the Great Food Truck Race, have been touring different culinary destinations in the Philippines, with Quezon City as a starting point and moving up north to Pampanga.

Now joined by Chef Charles Olalia (of Ma’am Sir restaurant in Los Angeles) for the rest of the tour legs, the chefs will be going around the two nearby cities of Iloilo and Bacolod from November 14 to 16, featuring a tour around Jaro Huebesan market in Iloilo, and a food crawl to sample Ilonggo specialties like the Decos La Paz Batchoy, Tatoy’s darag native chicken, and pasalubong favorites including the original barquillos of De Ocampo’s, and the famed Roberto’s siopao.

The group is also set to visit the Farm to Table restaurant for a special Ilonggo merienda cena, and the Camiña Balay nga Bato to try a cup of hot tablea or two, in the whole-day tour curated by Iloilo’s pride, Rafael Jardeleza Jr. or Chef “Tibong”, as he is more popularly known.

Chef Margarita “Gaita” Fores , who led the FilAm Chefs in a highly-informative tour at Farmers’ Market in Quezon City, returns to guide the group once more in going around Bacolod, visiting the iconic tourist sites like the famed Ruins of Talisay and Balay Negrense, and trying out Bacolod treats like the guapple pie in El Ideal, pili bars of Emma’s Delicacies, fresh lumpia of Sinda Belleza, seafood at Aboy’s, and piaya of Fresh Start Organic.

Another exciting component of the Chefs’ Food Trip to the Philippines project is the interactive symposium called DOT x WOFEX University Fun Food Talks, a series of events in each tour leg where the invited FilAm chefs can inspire local food enthusiasts, as well as culinary and tourism students through talks and cooking demonstrations.

The DOT x WOFEX University Fun Food Talks Negros will be held on Saturday, November 16, from 1:00PM to 5:00PM, at the newly-renovated Negros Residences in Bacolod City. For inquiries, interested parties may contact the WOFEX University secretariat through e-mail address wofexuniversity@gmail.com and mobile number 09985982837.

Over 1,000 tourists from Boracay and other parts of Western Visayas assisted by DOT-Region 6

6,000 tourists stranded in MIMAROPA assisted by the Department of Tourism

246 tourists stranded in Bicol assisted by the Department of Tourism

Over 1,000 tourists stranded in the Caraga Region assisted by the Department of Tourism Response Team

DOT8 guides and facilitates the passage of stranded tourists—now over 11,000 travelers and counting

Over 10,000 travelers assisted by the Department of Tourism’s response teams