This Father’s Day, why not steer Dad to something he’d really like – a good old-fashioned lip-tingling drink? If you happen to be travelling in the Far East at this time, then you might consider dropping the old man off at one of these swanky watering holes – places where the bartender can sling a decent martini while those on the barstools chat sports, cars, and which tidy tipple is coming next.

While every hotel stirs up a bar or two for guests, not every hotel offers a den as dark, moody and smouldering as Palace Hotel’s Royal Bar, where the whisky should be brooded over before drinking, and where the head bartender is, quite literally, the best in the world. A few years back, Manabu Ohtake bested 10,000 competitors for the ‘World’s Best Bartender’ crown in a Diageo contest. Ohtake’s bar is a place where they monitor the temperature of their ice … so you don’t have to.

Bangkok’s newest rooftop bar, Spectrum, has recently opened as a sparkling new gem in the crown of the city’s top-shelf night spots. Designed by the Japanese design firm Super Potato, the Hyatt Regency Bangkok’s new bar features a collection of cool, intimate spaces spread over three different levels. An intimate study room with a shared table is an ideal spot for a private dinner party with a floor-to-ceiling outlook on the city’s skyline, while the spacious living room entices guests to linger with deep, cushioned chairs and wooden tables spread out over a velvety blue carpet. However it’s the alfresco terrace that spans level 30 and 31, that’s the true drawcard and the best place to tuck into some wagyu beef sliders and a local craft brew while taking in the sprawl that is Bangkok. 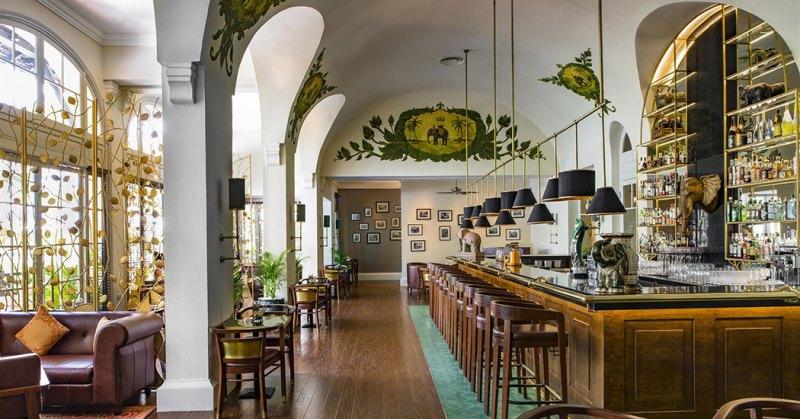 They say no trip to the Cambodian capital is complete without a visit to Raffles Hotel Le Royal’s The Elephant Bar, which has been serving G&Ts and Tom Collins since 1929 to the rich and famous, including Somerset Maugham, Charlie Chaplin and Charles de Gaulle. In fact, the bar’s signature cocktail is the Femme fatale which was named for Jackie Kennedy when she sipped the night away in 1967. While Raffles is equally renowned for its afternoon teas, this Father’s Day (Sunday, 16 June, 12 – 3pm) it is laying on a “Wagyu & Pavie Brunch” ($96), when every certifiable Dad will be presented with an exclusive bottle of The Elephant Bar Negroni. Or step it up a notch, and for $120 you can treat the old fella to free-flow Champagne & Esprit de Pavie wine.

The Cigar Bar at newly opened Awei Metta overlooks Pun Hlaing Golf Course, the only course in the country to host major tournaments. Decked in low leather seats, the lounge is a thinking man’s oasis where you can smoke and drink in uninhibited fashion while watching the action on the 18th. To accompany a fine selection of Scotch whiskies and cognacs, the discerning gent may opt for a smooth BLV Royal Corona cigar or a Magnum 46, two of Cuba’s finest.

If you get bombed at Le Club in the Sofitel Legende Metropole Hanoi, never fear — there’s an air raid shelter just below. Joan Baez once sought refuge here during the Christmas Bombings in 1972, and recorded a portion of her album, Where Are You Now, My Son, in the subterranean warren at the Sofitel Legend Metropole Hanoi. Excavated in 2012 and opened to hotel guests as a memorial, the shelter opens every day at Happy Hour. Otherwise, Le Club is the social hub of one of South Asia’s grand dames, built in 1901 and so completely refurbished in 2011 that the leading magazines hailed the hotel as one of the world’s most stunning debuts. Le Club itself emerged from a complete makeover in August 2016, looking a lot more like a speakeasy from the Roaring Twenties. 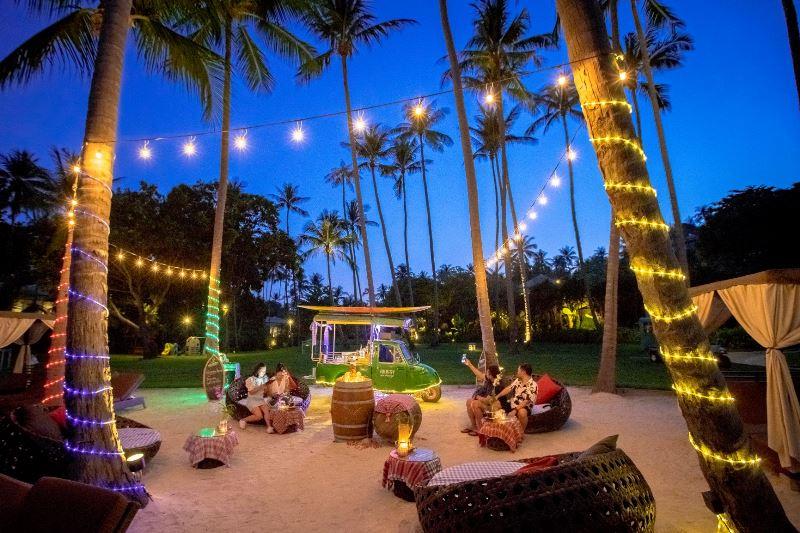 Banyan Tree Samui resort has recently opened what might be the quirkiest bar in Thailand — a cocktail caravan remodeled from a classic 1960s tuk-tuk. The MP4 Midget is virtually unseen on the streets of Thailand these days; but once upon a time, the “frogs”, as they were commonly nicknamed, were everywhere. Thousands of these 12 HP 350cc three-wheelers were manufactured by Japan’s Daihatsu company and exported to Thailand from 1959 to form a fleet of taxis nationwide. Revived from retirement, the newly dubbed Froggy Sea Breeze Beach Bar is open from 5pm till 11pm every evening. Highly recommended is the sweet n’ sour Froggy Melon, garnished in mint leaves, or The Botanical, a gin and absinthe-infused cocktail guaranteed to kick-start any engine.

The adage “it’s 5 o’clock somewhere” is very much the justification for more than one day-time whiskey, bourbon, gin, rum, vodka, tequila or cognac at Anam’s Saigon Bar. To step into this quaint yet stylish bar is to step back to the Indochine era, where its encaustic mosaic floor tiles, rich hardwood finishes, lanterns and black and white photography by renowned Vietnamese photographer Mai Loc create an atmosphere of old-world elegance. The extensive drinks menu is complemented with tapas such as beef short ribs, cold cuts including jamón serrano, chorizo and salami, and spicy braised pulled pork shoulder with Jack Daniels BBQ sauce and apple and fennel slaw. When 5 o’clock does roll around in Cam Ranh, and the sunny, humid day gives way to a cool breeze and then twilight on the bar’s outdoor terrace, the merriment continues as a live singer performs.

Decorated in a classic Cuban setting with mahogany paneling, swanky leather club chairs, flat-screen televisions, and a private humidor, Grand Hyatt Taipei’s cigar shop and lounge, La Casa Del Habano, is the ultimate man cave. The venue boasts one of the largest Cuban cigar selections in Taipei, including Padron 1926, Opus X, La Gloria Cubana Serie R, Arturo Fuente Rosado, Rocky Patel 1961, and Camacho Triple Maduro, just to name but a few. The glass-enclosed lounge at the back is the ideal spot for smoking aficionados to mingle, while savoring a single malt whisky from the hotel bar. 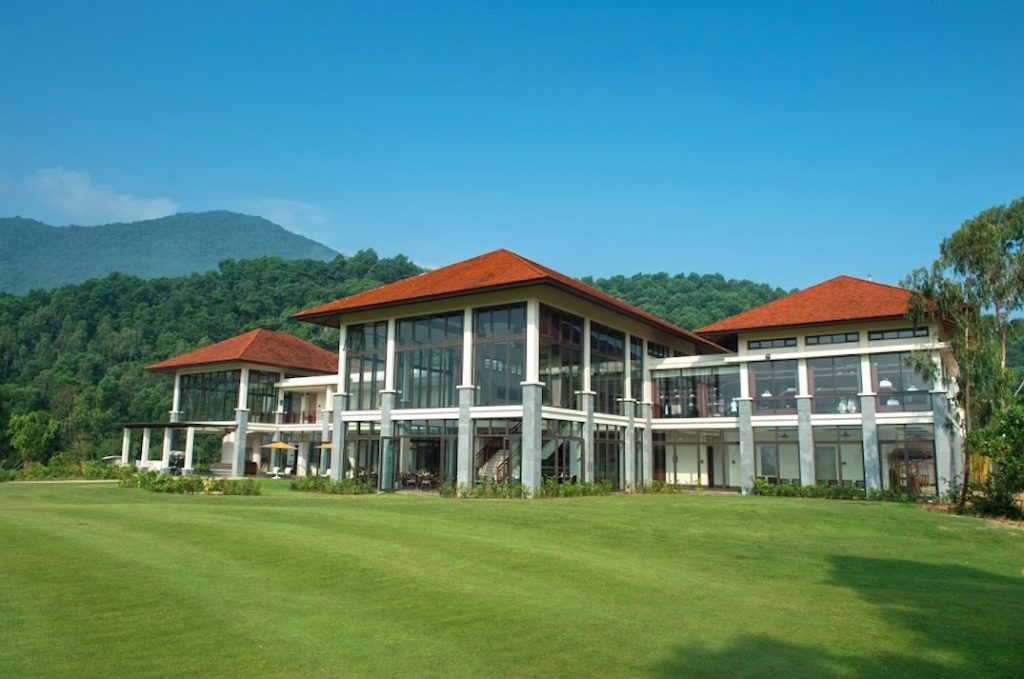 The 19th hole has traditionally been a refuge away from the course – a place from which to celebrate the good and bemoan the bad over a few libations. At 67, the new clubhouse bar at Laguna Golf Lang Co, an acclaimed Nick Faldo-designed course in Vietnam, such post-mortems can be conducted in the most spectacular of surrounds. Banks of windows let natural light stream into the venue while offering guests expansive views towards the golf course and the mountains in the distance. An extensive selection of premium booze — including selections from acclaimed Saigon craft brewer Heart of Darkness — heightens the levity. Other highlights, meanwhile, include an outdoor terrace perfect for the balmy tropical evenings.