Central Business Portal to modernize business registration in the Philippines 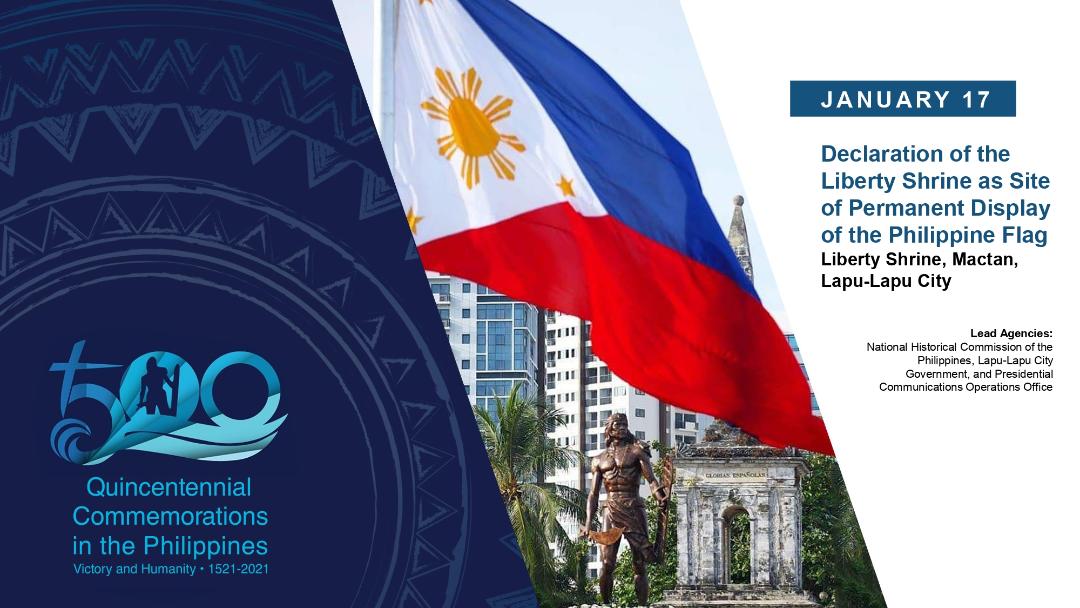 By virtue of National Historical Commission of the Philippines (NHCP) Board Resolution No. 10, signed on 16 December 2020, the Liberty Shrine at Barangay Mactan, Lapu-Lapu City is now a site of the permanent display of the Philippine flag effective 17 January 2021. Republic Act No. 8491, otherwise known as the Flag and Heraldic Code of the Philippines (1998), mandates NHCP to identify sites in the country to be given such status. This means the National Flag shall be at the mast 24/7 and properly illuminated at night. This recognition was given to the Liberty Shrine (established through Republic Act No. 5695 in 1969) in time for the 500th anniversary of the Victory at Mactan on 27 April 2021. The date 17 January 2021, likewise, marks the 100-day countdown to the said anniversary, which is designated by the National Quincentennial Committee (NQC) as the D-Day of the 2021 Quincentennial Commemorations in the Philippines.

Both the NHCP and NQC acknowledge the victory of our ancestors in the Battle of Mactan as a common heritage and pride of the Filipino people. It was already emphasized as “our history” by Jose Rizal and painter Juna Luna in their exchanges about a painting the latter made to commemorate the historic event. The victory was also invoked by Emilio Jacinto in 1895 to remind the founders of the Filipino nation that they had a triumphant heritage. It was even enshrined in the very document proclaiming Philippine independence read in Kawit, Cavite on 12 June 1898.

Among the places in the country enjoying the 24/7 status are the Emilio Aguinaldo Shrine in Kawit (site of the proclamation of Philippine independence), Rizal National Monument in Manila, Bonifacio National Monument in Caloocan City, Sta. Barbara Public Plaza in Iloilo (site of the first raising of the Philippine flag in the Visayas), and Barasoain Church (site of the First Philippine Republic, the first in Asia). The National Flag at the Malacañang Palace, Supreme Court, House of Representatives, Senate of the Philippines, and seaports and airports has also the same status. All other institutions and sites in the country shall observe the display of the National Flag every sunrise and lowering it every sunset throughout the year, except during inclement weather.

In 2021, we will commemorate the Philippine part in the achievement of science and humankind in circumnavigating the planet for the first time. Central in this commemoration is the 500th anniversary of the Victory at Mactan on 27 April 2021. These and more are collectively known as the 2021 Quincentennial Commemorations in the Philippines by virtue of Executive Order No. 103 (2020).

Know more about the event here: 👇