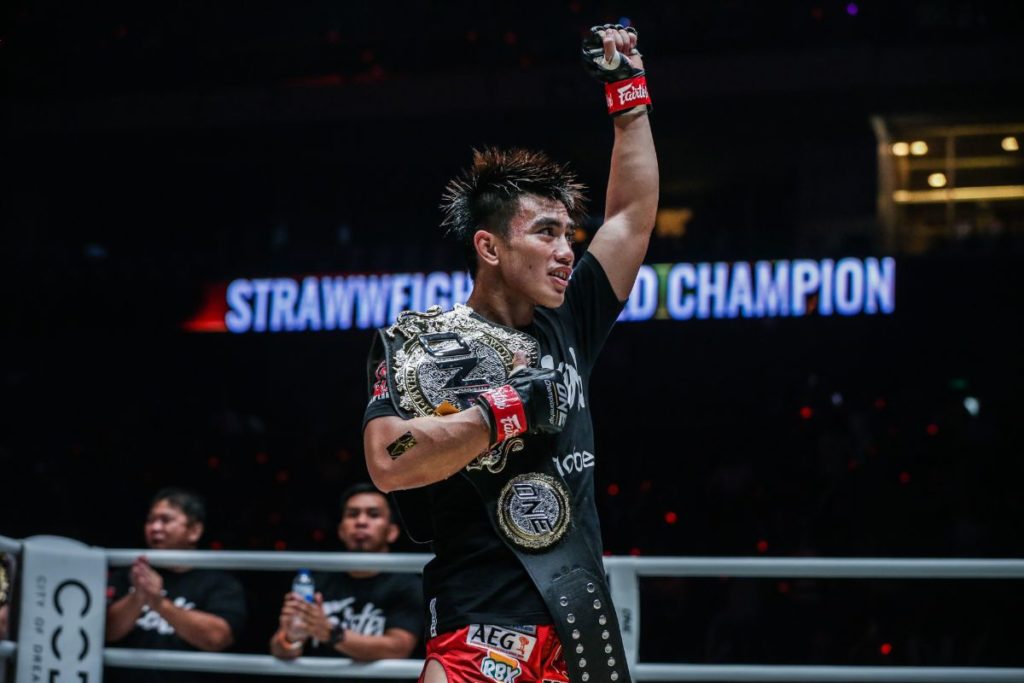 The largest global sports media property in Asian history, ONE Championship™ (ONE), once again electrified the crowd at the Mall of Asia Arena in Manila. Last Friday night, 8 November, ONE: MASTERS OF FATE played host to a series of action-packed and compelling contests, delivered by the absolute best in world-class martial arts talent.

In the main event, Joshua “The Passion” Pacio of the Philippines turned in a dominant performance, submitting compatriot Rene “D’ Challenger” Catalan in the second round to retain his ONE Strawweight World Championship. Pacio survived an early submission scare from Catalan to impose his will on the ground. In the second round, Pacio stuffed a takedown from Catalan and worked his way into mount, before securing a masterful arm-triangle choke, leaving the challenger with no choice but to tap out.

In the co-main event of the evening, former ONE Lightweight World Champion Eduard “Landslide” Folayang of the Philippines earned a technical decision victory over Mongolia’s Amarsanaa “Spear” Tsogookhuu after an unintentional clash of heads brought the bout to an abrupt end. Folayang was on fire in the opening round, turning up the aggression with his strikes. A collision of heads midway into the second round was ruled as an unintentional foul, leading to a technical decision being made, which went in favor of the Filipino martial arts hero. 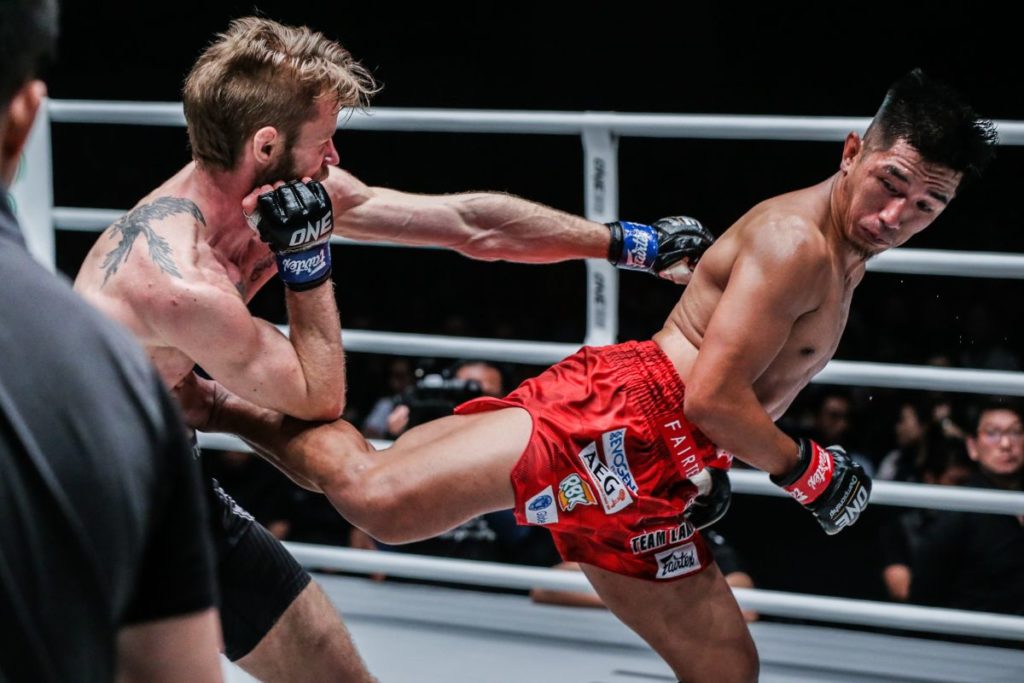 Multiple-time Muay Thai World Champion Sangmanee “The Million Dollar Baby” Sathian Muaythai of Thailand impressed in his ONE Championship debut, defeating Azize “The Magician” Hlali of Morocco by unanimous decision. Sangmanee outstruck Hlali over the course of the three-round affair to walk away with the judges’ nod on all three scorecards, earning him a spectacular victory in his maiden appearance on the ONE stage.

Former ONE Flyweight World Champion Geje “Gravity” Eustaquio barged back into the win column with a thrilling knockout victory over Finland’s Toni “Dynamite” Tauru. In the first round, it looked as if Tauru was going to pick up an early submission win, but Eustaquio survived getting his back taken and proceeded to turn the tide in his favor. After a rocky opening stanza, Eustaquio rallied back in the second round by using his superior striking to do heaps of damage. The former flyweight king finished things off in the third round with a spinning back kick to the midsection that sent Tauru crashing to the mat for the highlight-reel stoppage win.

Reigning ONE Atomweight Muay Thai and Kickboxing World Champion Stamp Fairtex of Thailand took another big step forward in her mixed martial arts career, picking up a huge win over Vietnamese-American star Bi “Killer Bee” Nguyen. Stamp used her top-notch striking to pick Nguyen apart in the standup, while showing off her improved grappling to defend against Nguyen’s takedown attempts. Nguyen stood right in front of Stamp, but had difficulty finding her mark. After three rounds of fast-paced action, Stamp walked away with the clear-cut decision win and remained unbeaten in her ONE Championship career.

Chinese spitfire “The Underdog” Li Kai Wen returned to the ONE Championship ring in style with a first-round knockout victory over Indonesia’s Paul “The Great King” Lumihi. Li was aggressive right off the bat, charging at Lumihi to unleash a flying knee to open the action. After an exciting exchange between the two warriors, Li unloaded a three-punch combination, capped off by a right uppercut to put Lumihi to sleep. 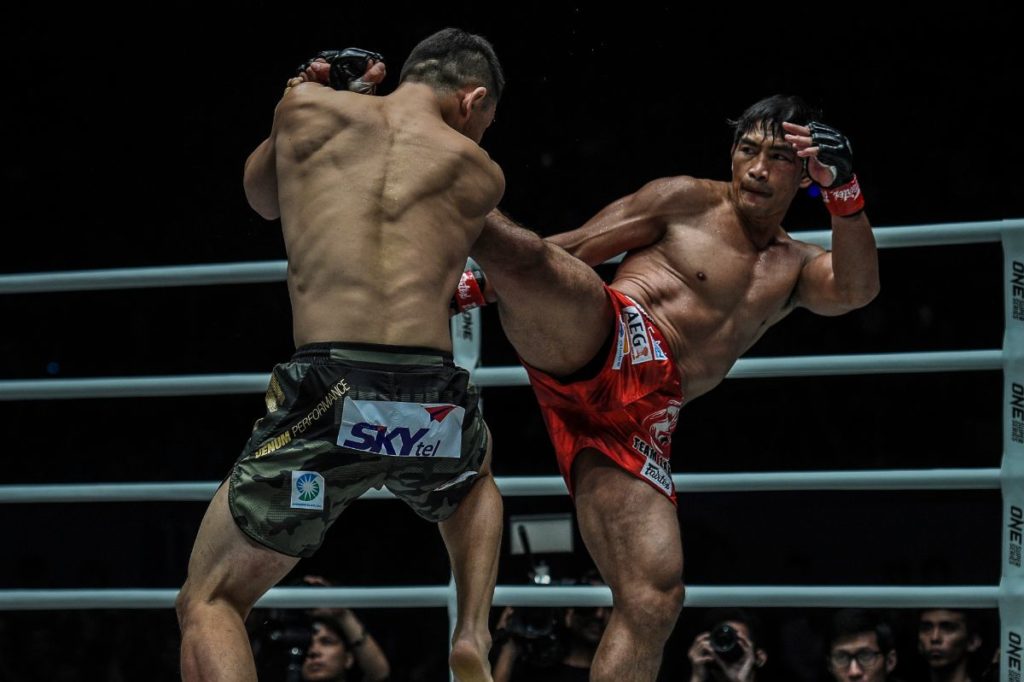 Former ONE Strawweight World Champion Yoshitaka “Nobita” Naito of Japan kept his momentum going with a three-round unanimous decision victory over Thailand’s Pongsiri “The Smiling Assassin” Mitsatit. The Japanese grappler imposed his game plan well, as he was able to ground Mitsatit at will. The Thai star looked to reverse his fortunes by pressuring Naito with his striking, but it wasn’t enough as the former strawweight king remained unstoppable with his takedowns. After three rounds of action, Naito walked away with the decision win.

The Philippines’ own Robin “The Ilonggo” Catalan sent the Mall of Asia Arena into a frenzy after scoring an explosive knockout victory over Cuba’s Gustavo “El Gladiador” Balart. Catalan was on point with his striking throughout the bout, and was able to hold his own against the high-level grappling of the Olympian wrestler Balart. Late in the second round, Catalan uncorked a well-timed right high kick that connected and took Balart out instantly, much to the delight of Catalan’s hometown crowd.

Multiple-time Muay Thai World Champion Tukkatatong Petpayathai picked up a gritty split decision win over former ONE World Title challenger Hiroaki “Kaibutsukun” Suzuki of Japan in his return to the ONE Championship ring. It was an exciting back-and-forth affair between the two strikers, with Tukkatatong scoring points with his body kicks. After three rounds of action, it was the Thai veteran who walked away with the decision.

“The Fighting God” Kim Jae Woong of South Korea announced his arrival in the ONE Championship featherweight division in exciting fashion with a technical knockout victory over Brazilian veteran Rafael “Indio” Nunes. Kim picked Nunes apart in the striking department, and was able to survive the Brazilian grappler’s submission attempts. In the final round, Kim landed a punch to the body that ultimately spelled the end for Nunes, leading to a gutsy win for the South Korean inside the distance.

Kicking things off at ONE: MASTERS OF FATE in Manila, India’s Roshan Mainam put on an impressive performance in his ONE Championship debut, submitting Cambodia’s Khon Sichan via first-round Americana. Mainam wasted little time in getting the action to the ground, taking Sichan down with ease. Once on the mat, Mainam imposed his will on Sichan, getting into mount before finishing the bout with a slick armlock.

—
About ONE Championship™
ONE Championship (ONE) is the largest global sports media property in Asian history, and the largest producer of millennial live sports content in Asia. Headquartered in Singapore, ONE is the Home of Martial Arts, and is the world’s largest martial arts organization, hosting bouts across all styles of martial arts such as Muay Thai, Kickboxing, Karate, Kung Fu, Silat, Sanda, Lethwei, Mixed Martial Arts, Tae Kwon Do, Submission Grappling, and more. ONE hosts the biggest sports entertainment events across Asia, featuring some of the world’s best martial artists and world champions on the largest global media broadcast in Asia. ONE Esports, a subsidiary of ONE Championship, runs Asia’s largest global esports Championship Series with some of the biggest blockbuster game titles in the world. In addition to its digital platforms, ONE Championship broadcasts to over 2.6 billion potential viewers across 140+ countries with some of the largest global broadcasters, including Fox Sports, ABS-CBN, Astro, ClaroSports, Startimes, Thairath TV, Skynet, Mediacorp, Great Sports, Tencent, Star TV, Mediaset Italia, ProSiebenSat.1, Dubai Sports, Turner Sports, and more.

Visitor arrivals to the Philippines surpasses 6 million, up 14.37% year-on-year

Hua Fung Teh Named Chairman of ONE Championship in China