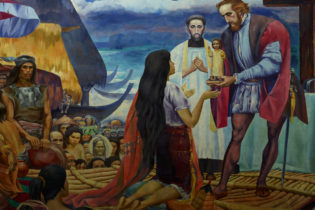 The National Quincentennial Committee (NQC) joins the Filipino Catholic faithful in the official commencement of the 500 Years of Christianity this Easter Sunday. The NQC, in partnership with The Roman Catholic Archdiocese of Cebu and the Augustinian Province of the Santo Niño de Cebu, through their respective 500 Years of Christianity – Archdiocese of Cebu and Santo Niño at 500 Committees, is set to facilitate on behalf of the National Museum of the Philippines the declaration of the Basilica Minore del Santo Niño de Cebu as National Cultural Treasure immediately after the Pontifical Mass for the 500 Years of Christianity on 14 April 2021, 4 p.m. The declaration will be followed by the opening of the National Historical Commission of the Philippines‘ exhibit titled Paghangop: The Santo Niño and the Filipinos at the Basilica’s convent.

Dr. Rene Escalante, NHCP Chair and concurrent NQC Executive Director, said that “The values embodied in the theme Victory and Humanity of the government-led 2021 Quincentennial Commemorations in the Philippines are aligned with the 500 Years of Christianity’s theme Gifted to Give.” He further added that the “NQC appreciates the emphasis of 500 Years of Christianity in celebrating the journey of Christian Filipinos in the last 500 years, which is Filipino-centric in point of view.”

The NQC supports the academic, cultural, and historical aspects of the 500 Years of Christianity as an integral part of the 2021 Quincentennial Commemorations in the Philippines, which is the committee’s branding for all the quincentennials happening this 2021 in the Visayas, Palawan, and Mindanao.

Over half a million overseas Filipino workers repatriated