The Philippine World Building and Construction Expo has certainly come a long way from its earnest beginnings. Debuted 25 years ago, WORLDBEX was borne out of the daring vision of Founding Chairman, Joseph L. Ang who sought to prove that the Philippines was indeed ready for topnotch expositions that can rival its international counterparts.

A groundbreaking vision for the Filipino future

Having spent some time abroad in search for new avenues of economic growth, Ang was inspired by the various international exhibits and expositions he had attended. This stimulus, coupled by his belief in the potential and capacity of the country to thrive given the right platform and opportunities, led to his vision of establishing the first-ever Philippine World Building and Construction Expo.

In 1996, the first-ever WORLDBEX, was held at the Philippine International Convention Center (PICC). A far cry from the 80-booth running rate of local trade shows at that time, the show was no less than groundbreaking as it surpassed industry standards with a whopping 156 booths and a significant percentage of international exhibitors. It is no wonder that the show attracted some 30,000 visitors who were all eager to take part in the momentous event. 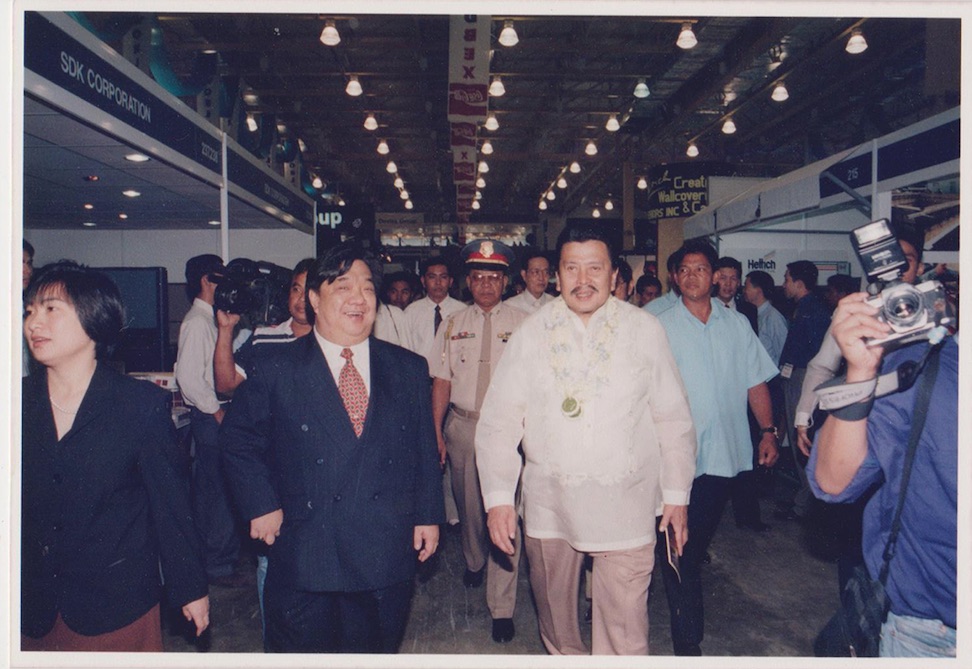 Over the years, WORLDBEX would continue to blaze the trail with various breakthroughs, milestones, and boundary-spanning achievements. The following year after its maiden show, WORLDBEX was held at the World Trade Center Manila for the first time. Attended by then Vice President Joseph Estrada, “Construction Week” was once again renewed.

For its 1999 installment, WORLDBEX presented the very first WORLDBEX Seminars with 600 delegates and the first-ever Grand Embassy Pavilion which was supported by the European Chamber of Commerce of the Philippines and the US Commercial Service. The introduction of these show highlights will eventually set in motion the development of more trademark fixtures that WORLDBEX is highly-regarded for.

2003 marked a monumental milestone for WORLDBEX as it demonstrates its magnificent growth with the addition of the Philippine Trade Trading Center as its second venue. It was also during this year when WORLDBEX began to exhibit its steady capacity to establish global links with its National Pavilions. The following year, another signature show feature, the Architects Gallery, was launched at WORLDBEX.

Evidently, there was no stopping WORLDBEX from expanding and 2005 bore witness to the show’s rise to the top as the country’s biggest and most comprehensive construction and design expo. For the first time, WORLDBEX was held in three venues with the addition of World Trade Center Manila’s extended wing to its exhibit space. In 2008, WORLDBEX continued to break new records as it experienced an all-time high in the participation of international exhibitors who hailed from 30 different countries.

Armed with foresight and a genuine concern about the quality of life of every Filipino, WORLDBEX took a stand and expressed solidarity for the environmental preservation movement as it adapted the theme of “Constructing the Future Green Communities through Efficient Technologies and Materials”. At this show, WORLDBEX managed to band together the country’s top architects, engineers, contractors, and interior designers to collectively work out solutions and encourage best practices that will incorporate environmental sustainability.

As WORLDBEX entered its second decade in the industry, it continued to introduce more creative and productive show features that entertained and expanded the awareness of its visitors as well as encourage connections among industry players. Among these include interschool interior design competition Obra Maestra back in 2011, the Furniture Gallery in 2012, the DELAXX landscaping competition in partnership with PALA as well as the WORLDBEX Lab in 2015, the City of Tomorrow exhibit in 2016, the WORLDBEX MiniCons, and the Projéto Student Design Competition in 2018.

Apart from its exciting range of event highlights that go beyond what one might expect from a trade show, WORLDBEX also strives to elevate visitors’ show experience. These efforts include the launch of the WORLDBEX app in 2015 and the addition of SMX Convention Center as a show venue in 2017.

As WORLDBEX celebrates its silver anniversary this March, it looks back to the past and forward into the future to reflect on its many years of service to champion the future of Philippine construction and design. Guided by the theme of “A Legacy Built”, this year’s WORLDBEX can also be viewed as a grand homecoming as it comes full circle back to where it all began.

Hailed as the ground zero of all Philippine expositions, the Philippine International Convention Center will complete the triad of venues for the upcoming WORLDBEX together with the World Trade Center Metro Manila and SMX Convention Center Manila. Also not to be missed at WORLDBEX 2020 is the first Philippine Garden Festival in cooperation with LACISAP; the unveiling of The World, which is a special installation that will showcase the legacy of WORLDBEX in the past 25 years; as well as the all-new Allied Arts Pavilion which will feature world-renowned artists such as Ramon Orlina, Joe Datuin, Raul Isidro, and Edgar Doctor.

This year, the WORLDBEX Seminars is also set to return with its most number of speakers to date. A total of 18 speakers from seven countries shall come together for this significant event. During the trade show, WORLDBEX will also be launching its first-ever coffee table book.

Backed by over two decades of expertise in mounting topnotch expositions that put the local construction and design industry at the forefront of excellence, WORLDBEX is eager to invite everyone to take part in its biggest and grandest installment yet.

Organized by Worldbex Services International, the 25th Philippine World Building and Construction Expo or WORLDBEX will happen on March 18 to 22, from 10:00am to 7:00pm at the three mega venues of World Trade Center Metro Manila (WTCMM), SMX Convention Center Manila and the Philippine International Convention Center (PICC). Pre-register at www.worldbex.com. For more information, call (02) 86569239, email [email protected] or follow @worldbex on Facebook and Instagram.

Expand your connections at WORLDBEX 2020