Kuwait — Christmas came early for 300 Filipinos who are staying at halfway shelters or are detained at Kuwaiti prisons, after the Philippine Embassy in Kuwait and the Office of the Undersecretary for Migrant Workers’ Affairs of the Department of Foreign Affairs (DFA-OUMWA) gave out cash and care packages under the DFA’s gift-giving program for distressed Overseas Filipino Workers (OFWs) on 26 to 28 November 2019. 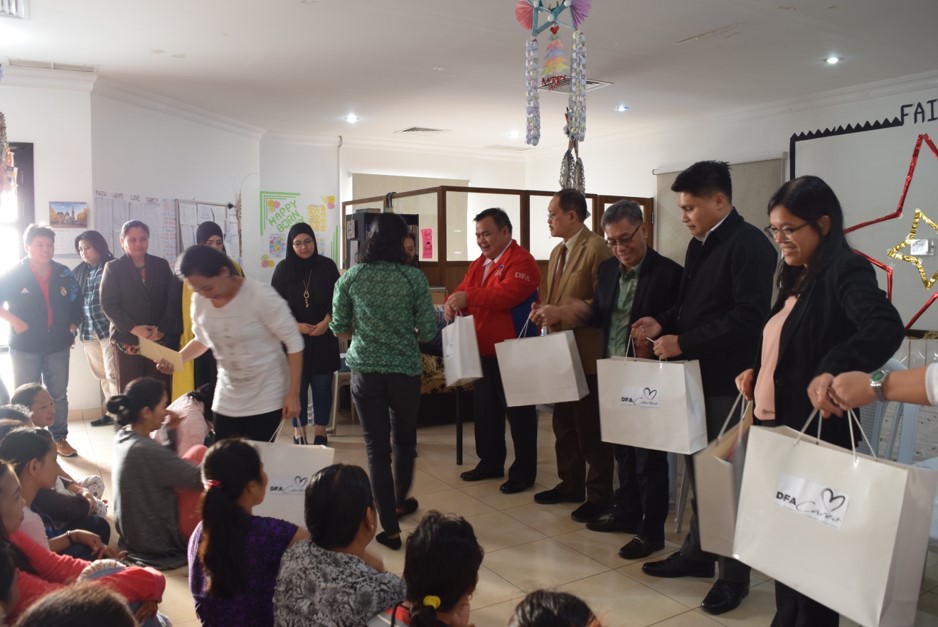 Chargé d’Affaires, a.i. and Consul General Mohd. Noordin Pendosina N. Lomondot and Executive Director of DFA-OUMWA Enrico T. Fos led the distribution of USD$100 financial assistance and hygiene kits to each of the 265 wards at the Migrant Workers and Overseas Filipinos Resource Center (MWOFRC) and at the Kuwait Public Authority for Manpower (PAM) Shelter.

The two officials also visited the Sulaibiya Central Jail to check on the condition of close to 50 Filipinos who are serving their prison sentences at Kuwait’s main detention facility, as well as to distribute personal hygiene kits. 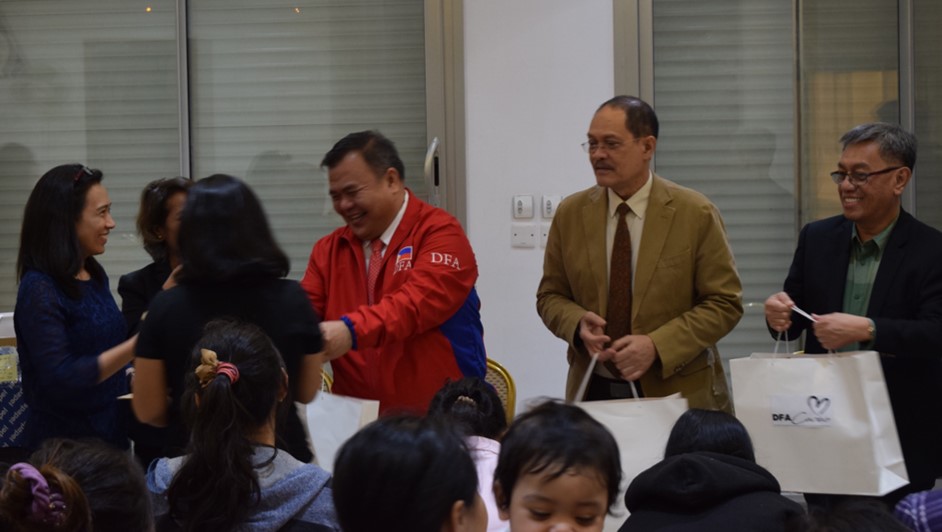 “The DFA, through the Philippine Embassy in Kuwait, initiated this gift-giving program as a way of sending the love of President Rodrigo Roa Duterte to our less fortunate kababayan in Kuwait, and as a way of telling our distressed OFWs that their government has not forgotten them,” Chargé d’Affaires Lomondot said.

Recognizing that the cash and welfare assistance offer only a short-term relief to the plight of distressed OFWs in Kuwait, Chargé d’Affaires Lomondot said that the Embassy continues to look for ways to resolve the issues with their employers and fasttrack their repatriation to the Philippines.

Accompanying Chargé d’Affaires Lomondot and Executive Director Fos during their visit to the MWOFRC are Vice Consul and Assistance to Nationals (ATN) Unit Head Adrian Audrey L. Baccay, and officials of the Philippine Overseas Labor Office in Kuwait headed by Labor Attaché Nasser S. Mustafa. The MWOFRC serves as the Philippine government’s halfway home for OFWs, mostly domestic workers, who are facing various issues with their employers in Kuwait.

At the PAM Shelter in Jleeb Al-Shuyoukh Area, Chargé d’Affaires Lomondot and Executive Director Fos were welcomed by PAM International Relations Department Director Jaber Ali Al-Ali, who discussed the processes and programs of PAM for foreign workers in distress. The Kuwaiti government opened the PAM Shelter for workers of all nationalities who are awaiting their repatriation to their respective countries.

The last stop of the Christmas gift-giving program is at the Central Jail in Sulaibiya Area, where almost 50 Filipinos are incarcerated for various criminal offenses. During the visit, Chargé d’Affaires Lomondot and Executive Director Fos also spent time with the inmates to talk about their cases, and discuss how they could seek legal and welfare assistance from the Embassy.

The 2019 Christmas gift-giving program, the first such project of the Embassy since 2016, was funded under the P1-billion ATN Fund of the DFA for 2019. The ATN and the Legal Assistance Funds of the DFA support the Embassy in the delivery of ATN services to Filipinos in Kuwait, such as the repatriation of undocumented Filipinos, and legal, medical and welfare assistance for OFWs in distress.

How domestic workers got organized in Kuwait