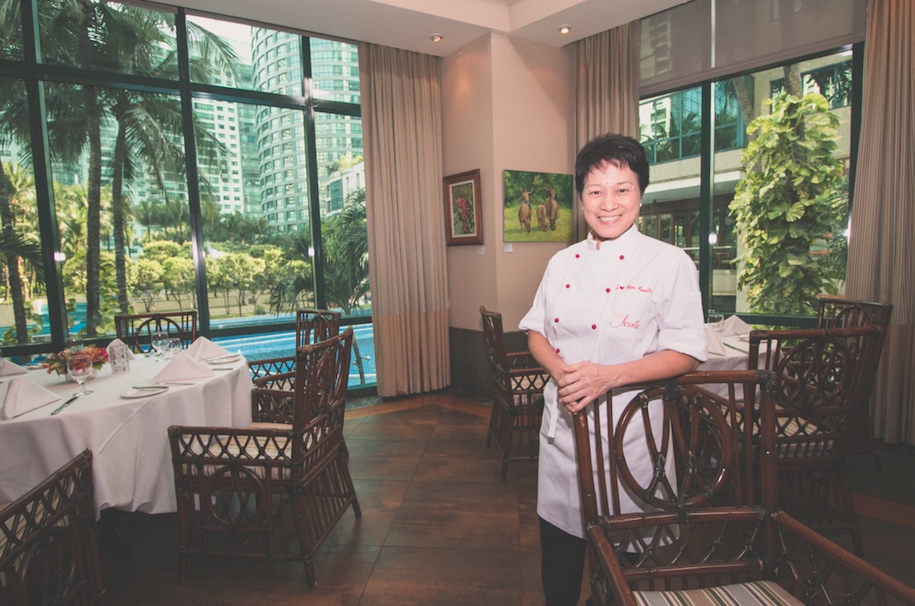 Chef Jessie reflects on her past, and looks forward to her future.

You can tell a lot about a chef not only through the dishes they prepare, but also through the experiences they accumulated. For instance, Chef Jessie Sincioco was the first ever Filipina pastry chef. She was handpicked to cook for His Holiness Pope Francis during the Pontiff’s visit to the Philippines in 2015, and lately assigned to lead the preparation of the Gala dinner for the heads of state and delegates of the ASEAN SUMMIT 2017.

But it’s not only the awards—and she has countless of them—or the menu of impressive dishes that are striking. When Balikbayan Magazine met with Chef Jessie one afternoon at her restaurant in the Rockwell Club, she was all warm smiles and friendly greetings as she welcomed us in.

Dressed in her immaculate white uniform, she never once lost her smile during her photoshoot for the magazine, or even after, when she sat down and shared her cooking journey, her Papal experience, and exciting developments about her restaurant.

Where Her Heart Belongs

Chef Jessie’s pursuit of culinary excellence both in the hot and cold section of the kitchen is unwavering as it is unparalleled. 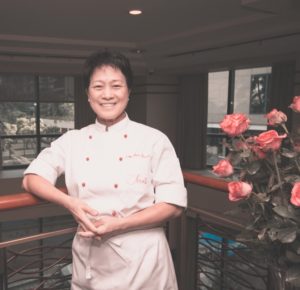 “There was a saying that if you are a pastry chef, you can never be good in the hot kitchen,” she said. “But I somehow proved that wrong by being a good pastry chef and, at the same time, a good chef in the hot section.”

Chef Jessie loves cooking everything—but more than that, she loves a good challenge. “Nowadays, we’re doing a lot of catering and my clients always tell me to cook anything,” she laughed, sharing the various menu she had to prepare in her line of work, including but not limited to: Moroccan, Spanish, Singaporean, African, and Guatemalan cuisine. “I enjoyed doing all that. I really love working with food.”

But when asked if she has to choose between cooking and baking, she immediately answered the latter, sharing how baking was the one that brought her into the kitchen.

Basking in the muted afternoon light, Chef Jessie recounted her childhood days when she would leave the kitchen as soon as she smelled onions and garlic being sautéed. “The smell clings to your skin and clothes—it’s just not pleasant.” But everything changed when she started working with cakes, cream, and chocolate. “Everything smelled good!”

According to Chef Jessie, baking and cooking are like heaven and Earth. From the way her eyes sparkled and her voice warmed with fondness, it’s no-brainer that baking is truly her heaven.

Chef Jessie has come a long way since winning the grand prize in the baking category of The Great Maya Cookfest in 1983 that basically launched her culinary career.

In 2015, she was chosen by the papal visit committee to put together and prepare a four-day menu exclusively for Pope Francis and 12 other papal guests. “The idea of cooking for the Holy Father never came into my mind—not even in my wildest dreams,” Chef Jessie gushed. “It’s really something I wasn’t expecting, that’s why when I was told I was the one, I was jumping with joy! I felt blessed and I was also glad that it happened when I felt I was ready.”

Chef Jessie spoke of the Pope with open awe, describing his presence as magnetic and simply majestic. One anecdote she’ll never forget was when she served roast beef as the main meal for the pontiff. “I ordered the best slab of beef I could get. I told our supplier I don’t care how much it was, just give me the best slab of beef and it has to be chilled—never frozen,” she related. “When the slab was delivered, I thought of roasting the beef. I thought of slow roasting it so the outside will be seared and seasoned and when I bring it to the nunciature, I’ll just slice and cook the steak to their doneness. I had one waiter with me and I had him ask how the guests like their steak. When he came back to tell me their answers, he said the Pope wanted his steak alive!”

Clasping her hands, Chef Jessie continued, “When he said that, I couldn’t help but shout yes! Because my decision to slow roast the slab was right—so when the Pope cut the center, it’s alive but the outside is cooked and safe to eat.”

It was one of the moments in Chef Jessie’s life where she felt like everything fell into place. “It’s like knowing you’re guided and this is exactly what you should be doing without anybody telling you,” she said.

“When they were about to go to Luneta, they were already aboard the Popemobile,” she recounted. “It was drizzling, so I said my goodbyes from the entrance where there was some cover. When they passed by, Cardinal Chito saw me and pointed me to Pope Francis. The Pontiff held out his hands and profusely thanked me—I was overwhelmed!” When Chef Jessie asked if he liked the steak, Pope Francis gestured with his hands and said, “Yes, it was so tender. It was so delicious. Like the cow, moo!”

As a chef and a devout Catholic, Chef Jessie considers this experience as the highlight of her career; after all, nothing beats the experience of cooking for the Pope, the representative of Jesus. “In the Philippines, I can definitely say I am the Papal chef,” she concluded proudly.

Everything in Chef Jessie’s life is super providential. Blessings upon blessing keep coming her way, so she thought of a way to give back.

“I don’t like people to forget about the historical moment of the Pope’s stay in the country. To help people remember, we will be offering all the menus that we served during the papal visit every year, from January 15—the day he set foot in the Philippines—until February 15,” she said. 100 percent of the proceeds will go to Tulay ng Kabataan, the orphanage the pontiff visited across the Manila Cathedral.

In 2009, Chef Jessie established JCS Gastronomie Inc. Today, as president and CEO of the company, she is actively running three restaurants: Chef Jessie Rockwell Club, Top of The Citi by Chef Jessie, and the newly opened Chef Jessie Grill at The Grove by Rockwell.

These restaurants all serve stellar and sumptuous culinary dishes that cater to the upscale market, but that’s where the similarities end. According to Chef Jessie, each of her restaurants have different personalities, different highlights that set them apart from each other.

On Top of the World

Located in the heart of the Makati Business District, Top of The Citi by Chef Jessie serves high-end international and asian cuisines.

“It’s more of a corporate outlet,” Chef Jessie said, explaining that being on the 34th floor of a skyline of a tall building made it somehow conducive for corporate functions. “But people also find it romantic. It gets full every Valentine’s Day.”

Top of The Citi offers a 360 degree view of the metro, and a dining area that can fit 120 people, with seven function rooms for 10 to 100 guests. “We’ve done a few weddings, birthday parties, and seminars there,” she said.

Famous for the Sea Bass with Goose Liver, Angus Beef Tenderloin, and Lamb Chop with Adobo Sauce, this executive fine dining restaurant’s menu is rife with dishes as spectacular as the view around you.

The Baby in the Family

“Chef Jessie Grill is our baby,” Chef Jessie smiled. Located at the Grove by Rockwell along C5, right across Tiendesitas, this restaurant opened its doors on September 8, 2016.

“It’s our smallest outlet, seating only 50 people,” she said. Still, Chef Jessie Grill is a must-visit place for people seeking a relaxing and cozy dining experience, and the taste of home cooked food. At a glance, you might shrug it off as a normal restaurant, simple without the flair and aesthetics of Chef Jessie’s two other fine dining restaurants, but once you take a bite of their delicious offerings, you’ll immediately know this is on par with the likes of Chef Jessie Rockwell Club and Top of The Citi.

This outlet’s casual but rustic approach to dining is already a hit, amassing a loyal following hungry for everything sizzling. Its popular dishes include the Special Chicken Adobo, the BBQ Pork Spareribs, and Green Tea Cheesecake.

Chef Jessie Grill is a testament to Chef Jessie’s versatility when it comes to cooking—there’s just that certain Chef Jessie magic in her dishes that everyone can enjoy in any kind of setting. 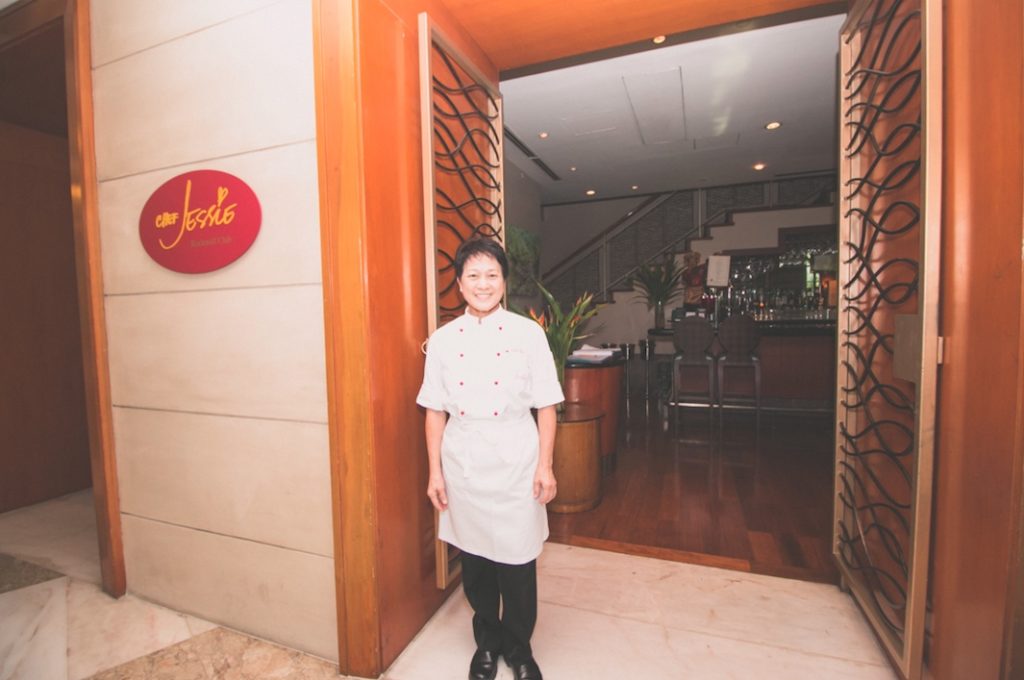 Elegance At Its Finest 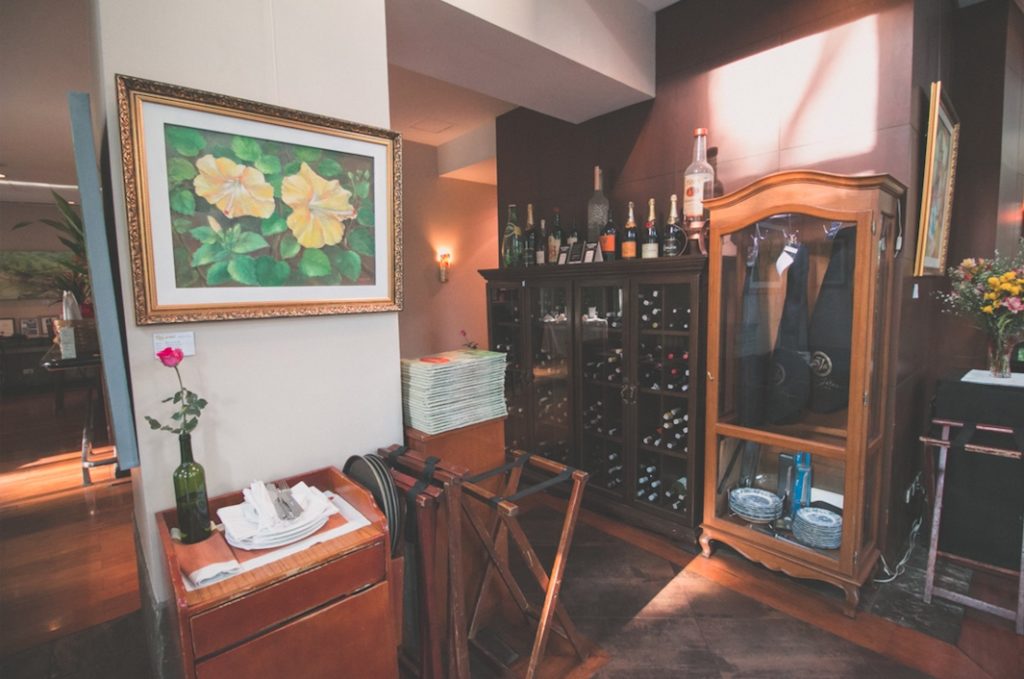 “This is also our outlet where people bring their guests because—according to them—if they come here, they get what they expect. So when they have important guests they want to impress, they bring them here,” she added. 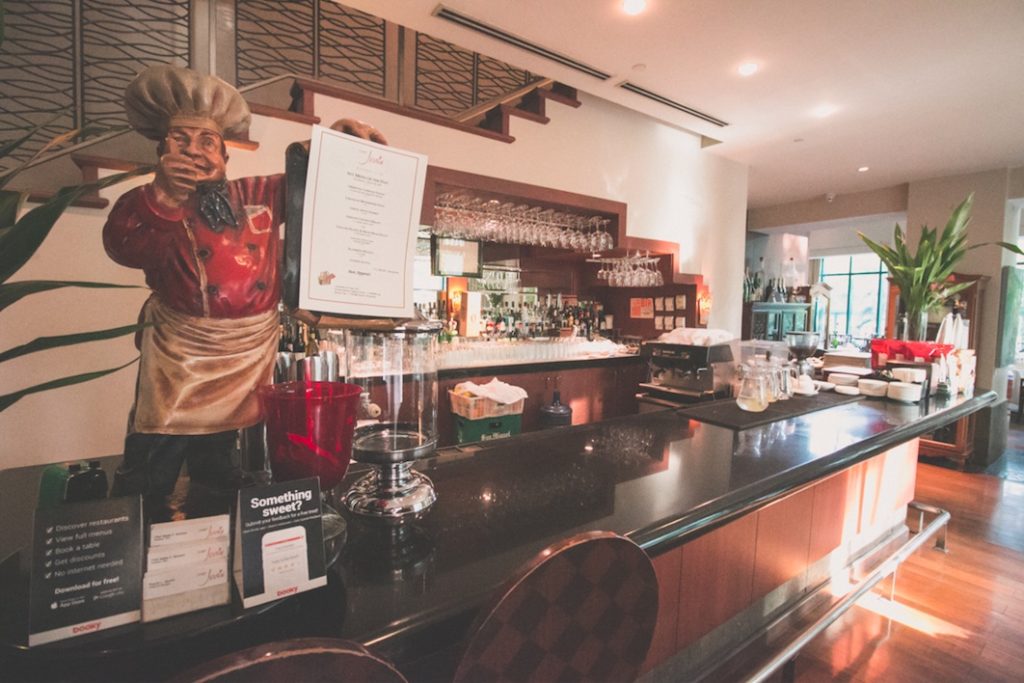 Despite its rustic flourishes, the restaurant exudes elegance with its high ceilings and great windows that let in natural light. The flooring is a mix of wood and tiles, the chairs are wooden, and everywhere you look is a feast for the eyes—oil paintings in gilded frames, fresh flowers in vases, and the outside view of the pool and garden. 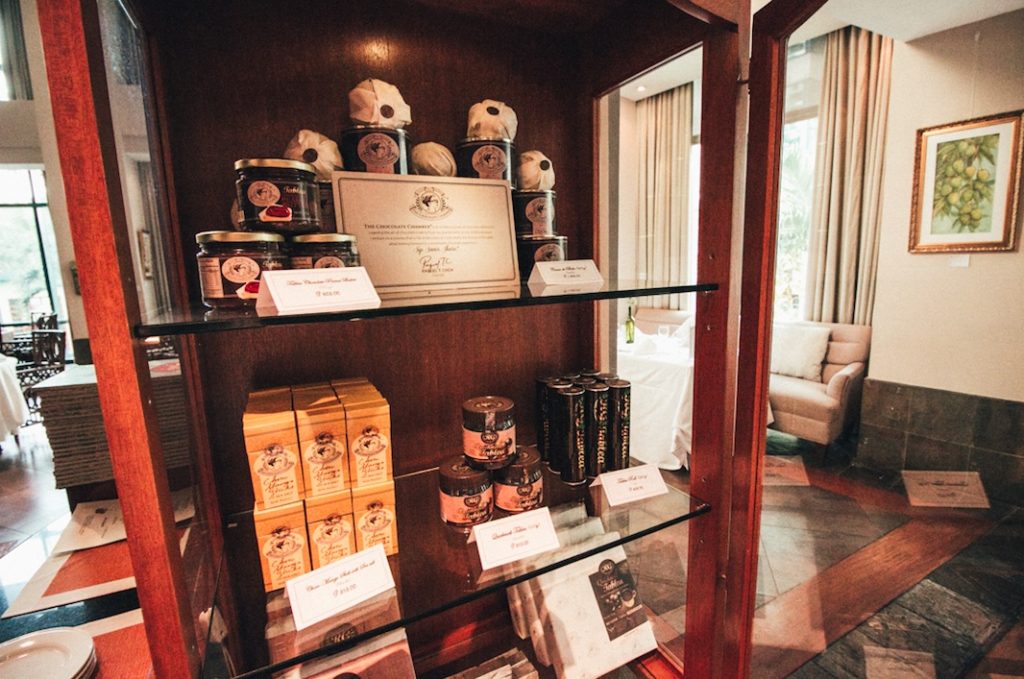 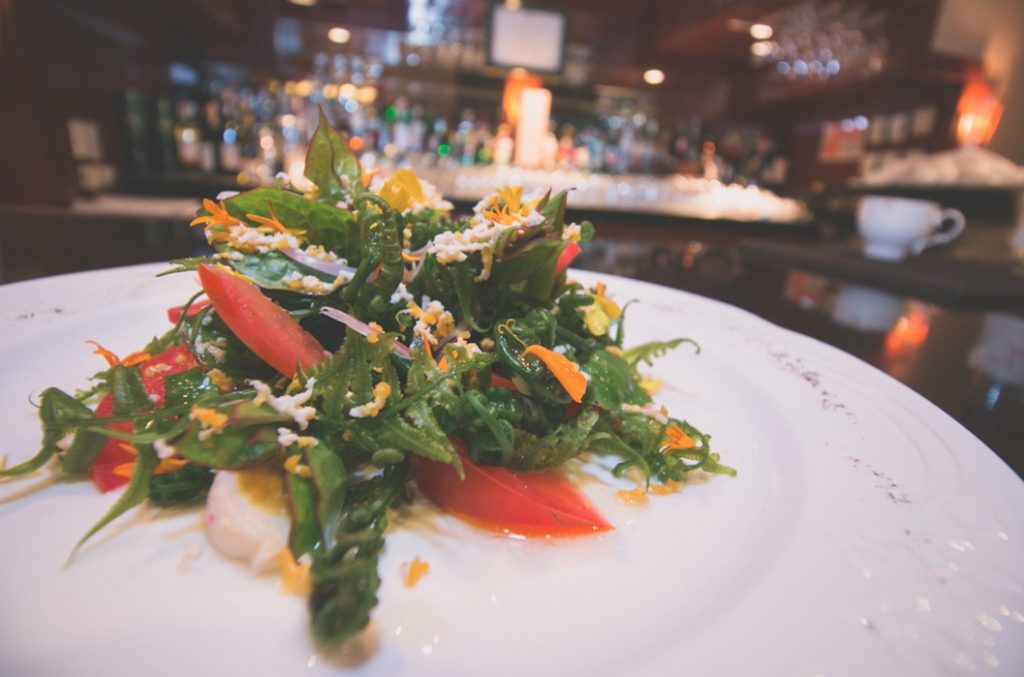 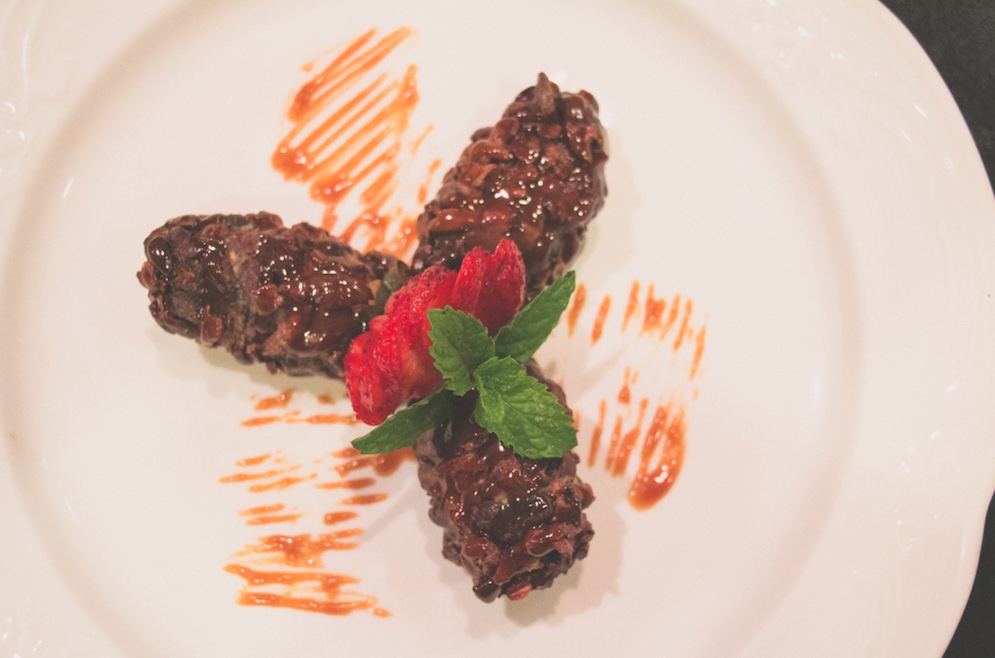 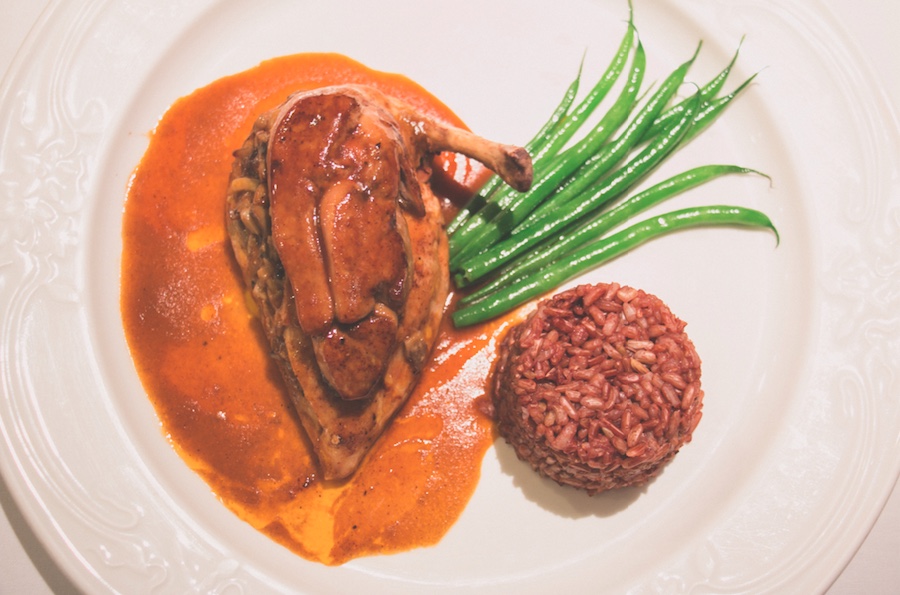 Chef Jessie Rockwell Club never fails to deliver international cuisine at its finest. The menu is teeming with elegant dishes as fine as the setting itself and the restaurant’s loyal customers have earmarked the Pasta a la Jessie and Pan Fried Goose Liver Salad as staunch favorites. 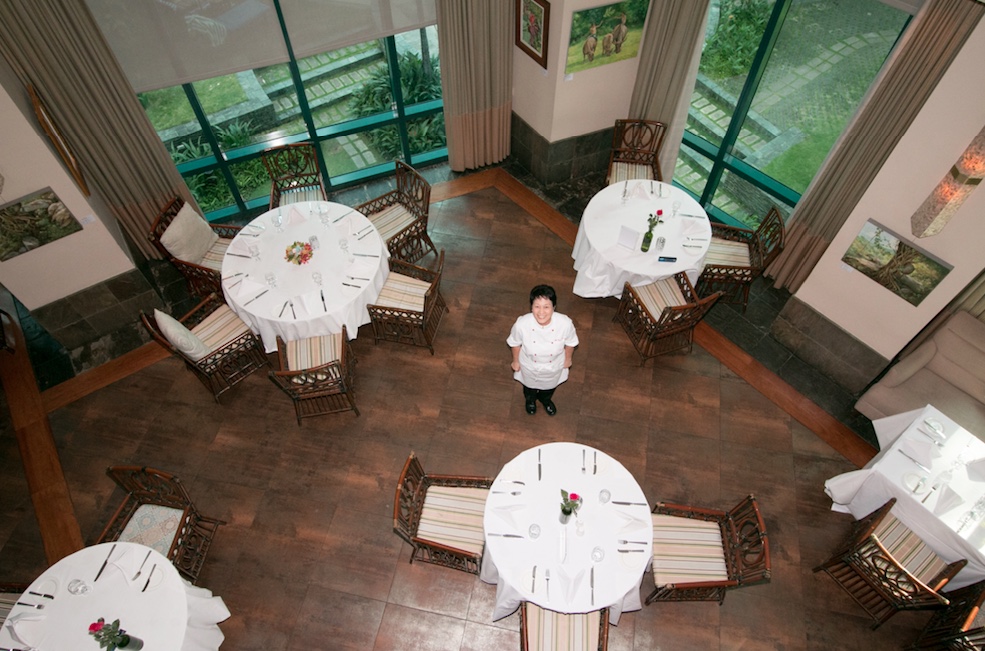 Chef Jessie Rockwell Club is set for renovation this April. When asked about her decision to have the restaurant renovated, Chef Jessie laughed. “It looks dated already! The chairs are more than 20 years old.” And while the chairs may look old, they carry a history in them that will never be replaced. Countless of dignitaries have sat on them—the President of the Philippines, starting from Joseph Estrada up to PNoy, among others. 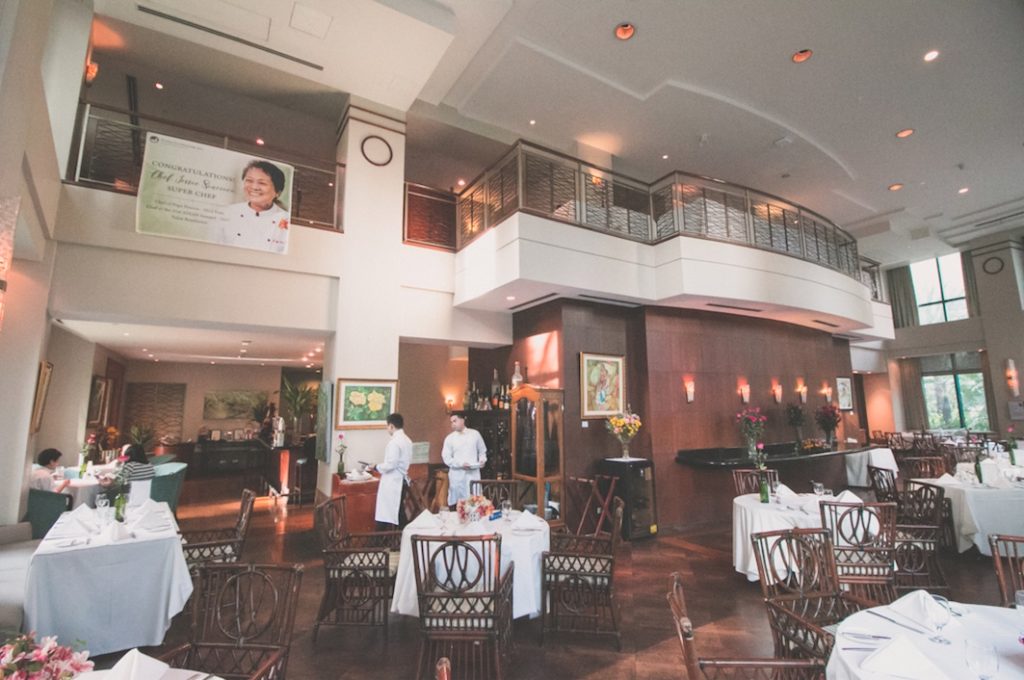 “The new look will have a tinge of something Filipino. The new design will make the place become part of the garden, like an extension; it will compliment the view outside,” Chef Jessie divulged. “There will also be new chairs, and a new bar. We want the bar to entice people to drink and enjoy wine.”

Apart from the setting, there will also be changes in the curated menu line-up and its menu cover. 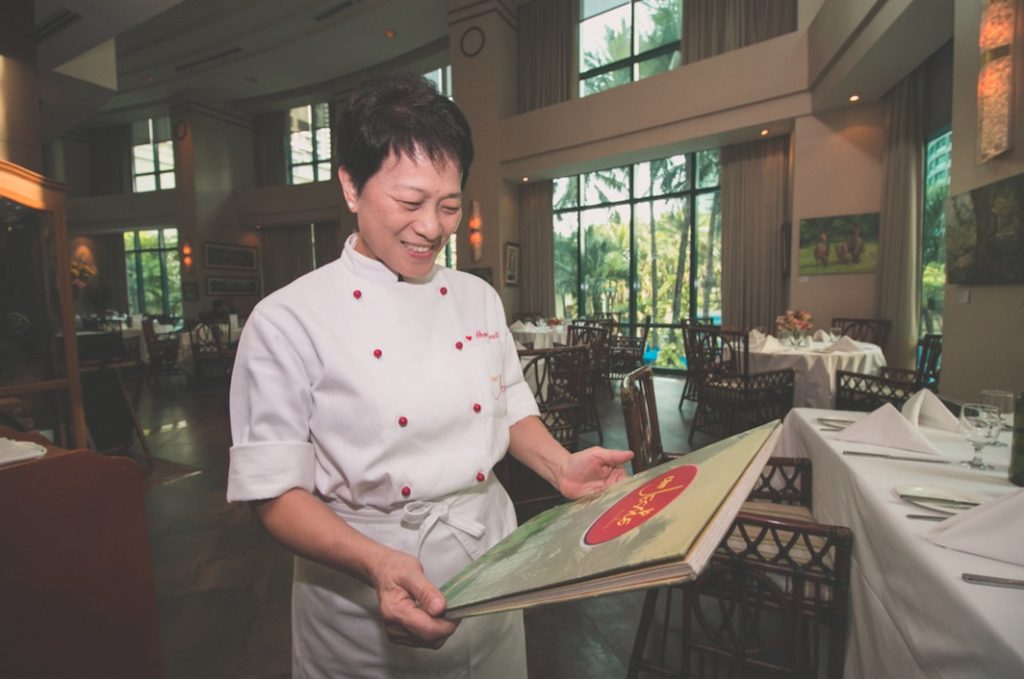 “I painted the design for the menu cover myself,” Chef Jessie shared. “I designed it with something people can identify with Filipinos. It’s a tree that when you see, you’ll immediately associate with us.” 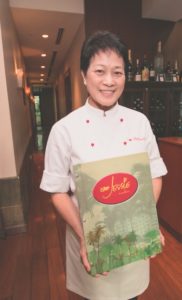 The menu, like everything else, will have a Filipino touch. “I’m a classic chef so I cannot stay away from that,” Chef Jessie explained. “I will still keep a lot from the present menu since they all have followings, but I will add more dishes and make sure the presentations are different.”

Chef Jessie’s excitement for her restaurant’s new developments was palpable—there’s a spark in her eyes that was hard to miss, urging everyone to look forward to Chef Jessie Rockwell Club’s new look. And if there’s one thing we know for sure, it’s that when it comes to Chef Jessie, expectations are sure to be exceeded.
–
For more information on Chef Jessie and her restaurants, visit www.chefjessie.com.
–
Photographed By Godwin Gasacao

BE Grand Resort: Inside Bohol's most luxurious waterfront resort