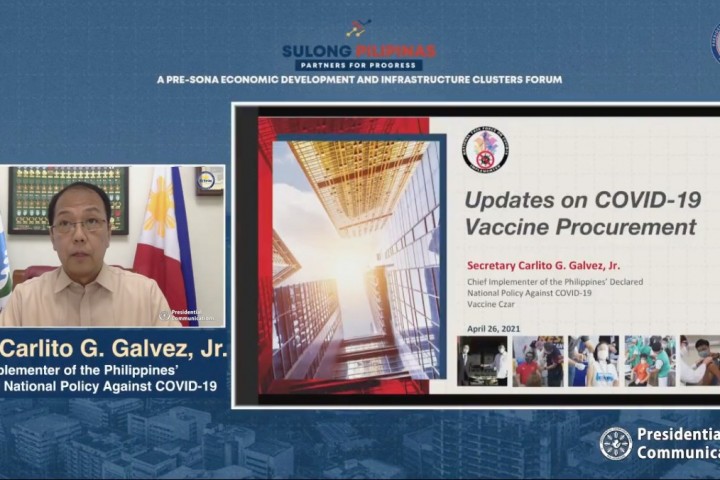 The Philippine government remains committed to its goal of building the country’s herd immunity by 2021.

With the government finalizing five out of seven procurement contracts with different vaccine manufacturers, National Task Force against COVID 19 Chief Implementer and Vaccine Czar Secretary Carlito Galvez Jr said he is confident that 70 million Filipinos will be inoculated by year-end.

“Bulk of the vaccines will arrive by mid-year and will scale up the implementation of our vaccination program and enable the country to achieve herd immunity at a faster rate starting June and July,” said Galvez.

The Vaccine Czar was among the panelists in Sulong Pilipinas 2021: Partners for Progress on Monday, April 26, which was also participated in by the Duterte administration’s chief economic and infrastructure managers.

The virtual forum is a Pre-State of the Nation Address organized by the Economic Development Cluster and Infrastructure Cluster by the Executive Department.

The forum provided a venue for the resource persons to discuss the latest economic and infrastructure developments, as well as provide updates on the national vaccination plan and other COVID-19 response and mitigation efforts of the government.

During his presentation, Galvez reported that the country expects to receive at least 140 million COVID-19 shots this year, which would support the government’s ‘containment strategy.

According to Galvez, the government is now conducting the simultaneous vaccination of priority groups to simplify the inoculation process, as well as accelerate the nation’s vaccination rate.

Currently, the county is vaccinating members of the healthcare sector, senior citizens, and persons with comorbidities.

By June, the simultaneous vaccination will include economic frontliners, essential workers, and indigent people.

“And by August, we will be opening the vaccination program to the general public,” Galvez said.

He said that by 2022, the government will start to carry out its plan that will enable the Philippines to achieve vaccine security, specifically by developing the country’s capacity to develop and manufacture its own vaccines.

By 2023, Galvez said the government will ramp up its preparations to be self-sufficient in addressing future pandemics.

In particular, Galvez said the government will focus on modernizing the country’s healthcare system so that the country will be able to withstand any kind of public health emergency.

—
Stay updated with news and information from the National Task Force Against COVID-19 by visiting their Facebook page at https://web.facebook.com/ntfcovid19ph.

Government support crucial to tech startups' growth in the Philippines

The Philippines receives more than 3M doses of Pfizer; Davao, Cebu gets 994,500 doses each from COVAX