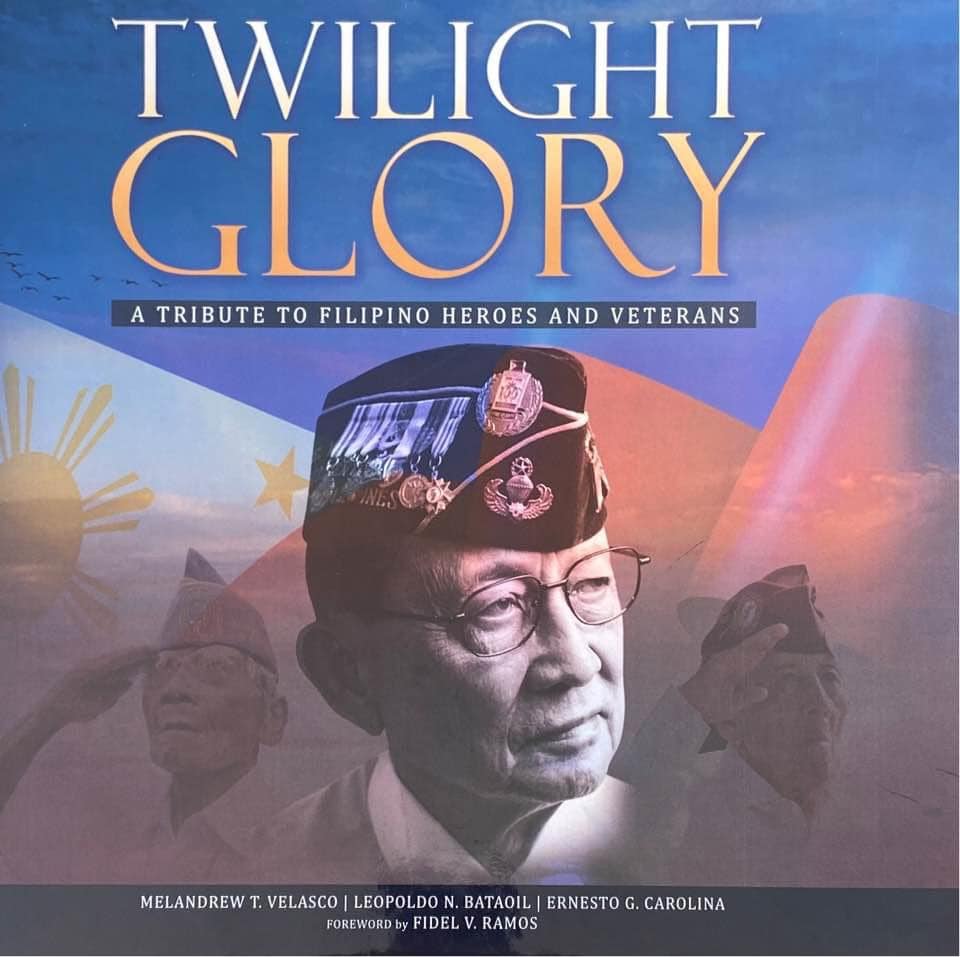 The Philippines has many heroes—living and dead, recognized and unsung—who helped shape the country’s destiny and honoring them is the least the nation can do for them.

This is the essence that publisher and author Melandrew T. Velasco wanted to underscore when he wrote Twilight Glory: A Tribute to Filipino Heroes and Veterans with Philippine Veterans Affairs Office (PVAO) Administrator Ernesto G. Carolina and former Congressional Committee on Veterans Affairs and Benefits Chairman now Lingayen Mayor Leopoldo N. Bataoil as co-authors. The book is co-published by the Ramos Peace and Development Foundation (RPDEV), PVAO and Media Touchstone Ventures, Inc. (MTVi).

A 320-page coffee table book, Twilight Glory: A Tribute to Filipino Heroes and Veterans tells the story of over 500 years of the Filipinos’ struggle for a free, independent and sovereign nation. From the pockets of revolts in the early Spanish regime to the years of the Philippine Revolution in 1896; from the Philippine-American War to the attainment of Philippine independence from the U.S. in 1946 with World War II in between; from the post-World War II reconstruction and rehabilitation and to the Philippine participation in the Korean and Vietnam wars to ensure regional peace and security; and from the Martial era and to the rebuilding of the nation in post-EDSA People Power Revolution.

As a tribute book to heroes and veterans, it has a chapter on the national shrines, memorials and the government entity mandated to ensure the welfare of veterans, the Philippine Veterans Affairs Office.

The book also includes a chapter on the veterans’ fight for benefits and recognition here and in the U.S. and another chapter on current challenges of the country: peace and order, foreign relations, natural calamities and the COVID 19-pandemic.

Twilight Glory was initially intended for book launch presentation on 22 March 2020 at the Fairmont Hotel to be part of the 92nd birthday celebration of former President Fidel V. Ramos. He is among of the country’s living heroes. He has witnessed the experienced the horrors of war; has participated in the Korean and Vietnam Wars; fought as a soldier in the AFP; and has served the country in another battlefield, as President of the Philippines. His Presidency ushered in a new era in the country’s history as he led the country to become among the fastest growing economies in the region during his time. He is a hero both in times of war and peace. And he deserves to be honored in his twilight years.

Because of the quarantine imposed in mid-March by the government to contain the spread of COVID-19, the launch was moved to 9 April 2020 to coincide with the commemoration of Araw ng Kagitingan. Unfortunately, the quarantine still stands until today, and the launch has been moved indefinitely.

The COVID-19 pandemic, along with natural calamities in the past has given rise to new heroes and they are not limited to the uniformed men and women of the AFP and the PNP. “We have modern day heroes who sacrificed their lives to save others in times of calamity and national emergency like those doctors, nurses and other frontliners to minister to the sick and keep our communities safe,” wrote Velasco.

Former President Ramos once said: “Today our country calls us, not to die but to live for it. The patriotism borne of revolution and war must give way to citizenship for peace and development, which means personal commitment, social obligation, and civic responsibility.”

As in the past, the business community has heeded this call. San Miguel Corporation President and CEO Ramon S. Ang, one of the sponsors of the landmark Twilight Glory book project, has launched a number of initiatives to assist those affected by the pandemic and, as of July 1, has spent more than P13 billion for their relief efforts.

The book’s principal author Velasco is the family biographer of former President Fidel V. Ramos and has co-published more than 15 books with RPDEV. He is President and CEO of MTVi and has authored 35 books.