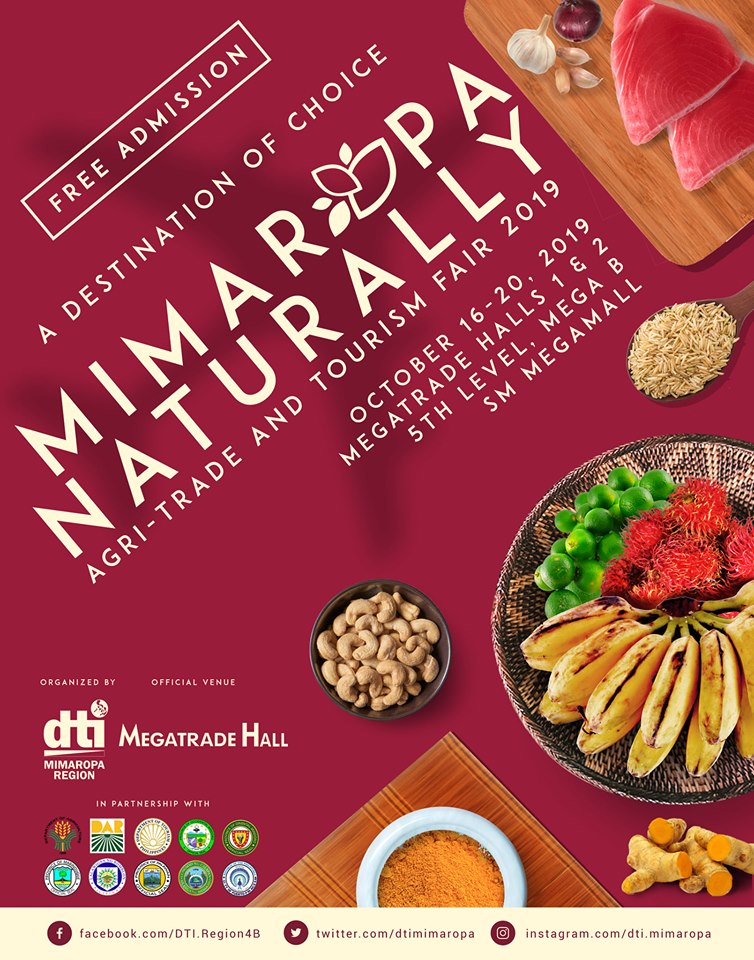 The Department of Trade and Industry (DTI) hopes micro, small and medium enterprises (MSMEs) from the MIMAROPA (Mindoro, Marinduque, Romblon, Palawan) region would generate P80 million in sales as it leads the fifth edition of the MIMAROPA Naturally Agri-Trade and Tourism Fair on October 16 to 20, 2019 at the Megatrade Halls 1 and 2, SM Megamall in Mandaluyong City.

At least 280 MSMEs from the provinces of Occidental and Oriental Mindoro, Marinduque, Romblon, and Palawan will strut their wares of local products and tourism destinations during the five-day fair, which will also feature the One Town, One Product (OTOP) Next Gen special setting with over 150 new and upgraded product designs.

DTI MIMAROPA Regional Director Joel B. Valera said the high sales expectation was due to the high quality and competitive products of the region’s MSMEs as the agri-trade and tourism fair is also expected to help jumpstart MSMEs’ vision of penetrating mainstream domestic and export markets, which will result job generation locally to support the Trabaho and Negosyo agenda of the administration.

Earning only at a paltry sale of P4.7 million in its opening in 2015, the MIMAROPA Naturally Agri-Trade and Tourism Fair has since garnered much attention in succeeding years as last year’s edition raked a whopping P70 million—far from its actual target of P50 million sales.

“MIMAROPA MSMEs’ enthusiasm in this agri-trade and tourism fair is very high since we started this trade fair in 2015, we set the bar higher by providing them business technical assistance. We make sure we closely monitor the MSMEs’ progress so we can allure buyers from the capital. Hopefully we can reach or even exceed the target,” Valera explained.

Products that will be exhibited during the agri-trade and tourism fair include processed food, furniture and home furnishings, wearables, such as fashion accessories, bags and footwear, and gifts and holiday decors.

In addition to the highlights, the agency also invited over 500 institutional buyers from Metro Manila for the closed-door buyers’ hour to help MSMEs link with large and expand the reach of their products.

Payments can also be made on a cashless basis as the DTI has adopted an electronic payment transaction to help capacitate MSMEs and utilize online payment solutions. Buyers can pay using GCash, PayMaya, and Dragon Pay applications.