Infertility affects 1 in 10 Filipino couples, according to a study commissioned by pharmaceutical firm Merck Serono. Today, most cases are treatable—thanks to miracles of modern science through medications and advanced technological procedures.

At St. Luke’s-Global City’s Center for Advanced Reproductive Medicine and Infertility (CARMI), couples are ensured of fully integrated and comprehensive fertility
services. CARMI was established to fill the gap in experiencing competent assisted reproductive technology in the Philippines at a reasonable price.

Dr. Virgilio M. Novero, Jr., head of CARMI  and one of the pioneers of IVF practice in the Philippines, emphasizes the important determinants for a successful outcome — the profile of the couple, medical staff competence, quality of IVF laboratory, and the use of cutting-edge technology.

How Do Couples Know If IVF Is For Them?
Infertility should be diagnosed first as to find the cause, said Novero. IVF is prescribed to females who have blockage problems in their fallopian tubes, or those who have had pelvic disease from endometriosis and infections. Candidates for IVF also include women with ovulation problems, advanced age with or without decreased ovarian reserve, uterine fibroids, or with a genetic disorder or unexplained infertility.

Contrary to the notion that infertility is a women’s issue, there are cases that males are also accounted for. “Male factor infertility is very important. It accounts for about 55 to 57 percent as a contribution to infertility,” said Novero.

IVF also aims to address cases when a male has low sperm count or low sperm quality. This is done through a supplemental procedure called intracytoplasmic sperm injection (ICSI) where the sperm is directly injected microscopically into the egg during the IVF process. When prescribed in certain subsets of infertile couples, ICSI has been found to elevate the success rates. 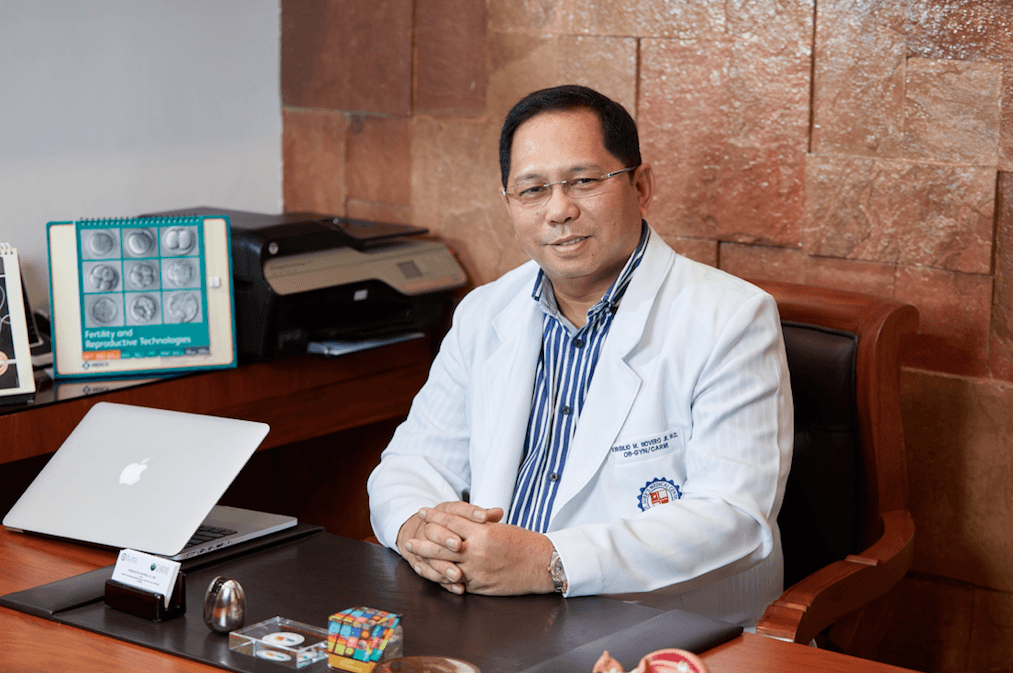 CARMI has an all-Filipino clinical and scientific support staff who are well-trained and compassionate to provide personalized and individualized care. Many of its specialists are among the most competent, having trained in recognized fertility centers in the US, Europe, and Asia and are leaders in the Asian and national fronts. These qualities earned the trust and confidence of both local and international patients, helping them to realize their aspirations to have a baby.

State-of-the-art diagnostic, medical, and surgical equipment St. Luke’s offers state-of-the-art equipment from diagnostic to therapeutic approaches that are among the most advanced in Asia, many of which are not available in other local and international fertility centers. It is also the only hospital-based ART (Assisted Reproductive Technologies) facility in the country, thus, expediting screening examinations and pathology tests, an ideal arrangement for managing infertility.  Given this, patients are ensured of maximum safety and convenience.

CARMI has also initiated numerous procedures in fertility medicine in the country. It was the first to offer cutting-edge diagnostic tests such as the Anti-Mullerian Hormone (AMH) testing for ovarian reserve, sperm DNA Fragmentation Test (Halo Test), time-lapse videography (TLV) of embryonic development, and very recently, preimplantation genetic testing (PGT) where embryos may be evaluated for genetic disease before they are transferred to the uterus. It is also in CARMI where the only in-house acupuncture service as a complementary treatment protocol for infertility is found.

The center has an ever-growing list of firsts in the field of fertility treatment in the country. In October 2012, it was in CARMI where the first IVF pregnancy and delivery after Micro-TESE (Microsurgical Testicular Sperm Extraction) was documented. Others include an ever-growing list of deliveries after using introducing TLV and uninterrupted embryo incubation in 2015. It was also the first to have ovarian tissues cryopreserved for future fertility, in this case in a patient with breast cancer. And with its recent introduction of PGT, CARMI is proud to announce the country’s first pregnancy after trophectoderm biopsy and preimplantation genetic testing.

Since 2011, CARMI has consistently achieved high clinical success rates. In 2013, it achieved an overall pregnancy rate of 43 percent, higher than the world average of 31 percent, based on World ICMART (International Committee for Monitoring Assisted Reproductive Technology) reports. To date, CARMI is responsible for over 400 babies born through IVF.

Reasonably Priced
The price for an IVF procedure at St. Luke’s Medical Center is more affordable than those offered in the United States and other Asian countries, attracting both Filipinos and foreigners alike.

“The cost of IVF in the U.S. would be somewhere between $15,000 to $20,000 at least. That’s why we have many balikbayan Filipinos in the U.S.who come over for treatment. Now, even American couples who are not working here travel to CARMI from the U.S.,” said Novero.

At St. Luke’s CARMI, one IVF cycle (extraction, fertilization, and implantation) for a patient can start from an average of Php280,000 to Php350,000, including hospital charges, medicines and doctor’s fees. This is equivalent to approximately $5,000-$7,000.

The Cancer Team At St. Luke’s: Pushing The Survival Rate For Cancer Patients