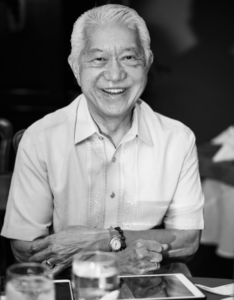 We caught up  with Gov. Mandanas during his dialogue with the Catholic clergy led by Archbishop  Gilbert A. Garcera, D.D. of Lipa, Batangas. They were discussing various issues concerning their province over lunch after a Monday mass held at St. John Paul II Shrine Chapel located in the 130-hectare Montemaria.

The governor was enjoying the company of the priests. While waiting for his interview, his wife, Regina Perez  Mandanas, accommodated us.  In between administering the event,  she  introduced various guests to her mother, the 85-year-old Marinduque Governor Carmencita Perez.

When Governor “Dodo”, as he is fondly called by his family and close friends, finally finished his discussion with the priests, he stood, looked at his watch before sitting with us for an interview.

We had a quick conversation regarding his political career and his vision for his fellow Batangueños.

Despite building a stellar reputation working in the private sector, Mandanas said he chose to pursue a career in politics due to his passion for “development” and helping people, starting of course with his fellow Batangueños.

Mandanas’ life as a public servant began when he  served as the 1st General Manager of the Human Settlements Development Corporation under the administration of former President Ferdinand Marcos.

From 1995 until  2004, he served as Governor of the Province of Batangas for three terms and concurrently became the President of Federation of Regional Development Council of the Philippines. Also, he  served as Chairman of the Regional Development Council (Region IV-A,) from 1995 to 2004, Regional Peace and Order Council (Region IV-A) from 1995 to 2001, and from 2003 to 2004, and CALABARZON (Cavite, Laguna, Batangas, Rizal, Quezon) Coordinating Council  from 2001 to 2004.

He was elected as Batangas governor after  topping the five-man race for Batangas province’s top post in last year’s national elections.

Armed with an expertise in investment and development, stayed true to his promise during campaign to  further strengthen the province’s economy through livelihood development, efficient fiscal management, and continued investment in health care and education.

Mandanas also takes pride in Batangas being the “most powerful province” in the country by supplying 60 percent of Metron Manila’s electric requirement equivalent to serving around 40 million individuals.

When asked about retirement, the 73-year-old governor made a clarification first of what retiring means to him.

“Retiring does not mean doing nothing. Retiring means doing what you want. So if you’re going to ask me about retiring, I have retired at the age of 25.”

“I feel like a 60-year-old,” he added. “I just want people to enjoy,” he explained when asked what legacy he wants to leave to the people of Batangas.

Truly a man of action, Mandanas said: “It’s not all about speeches. It is about performance. People should see how you perform.”

0
Jennifer Soriano December 1, 2017
No Comments Yet