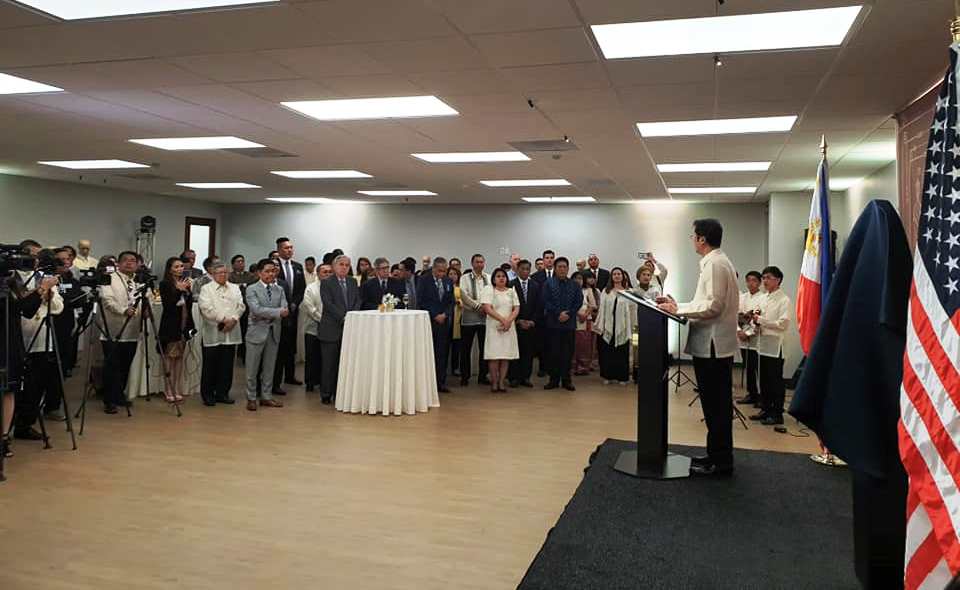 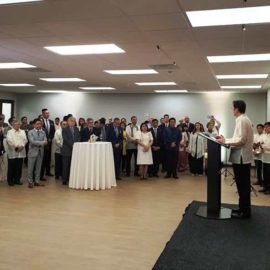 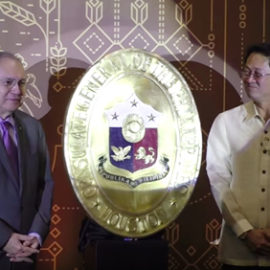 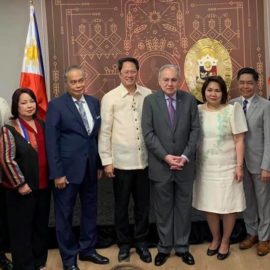 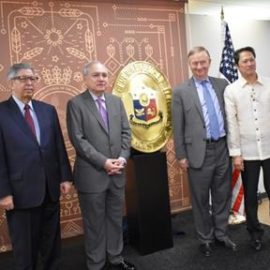 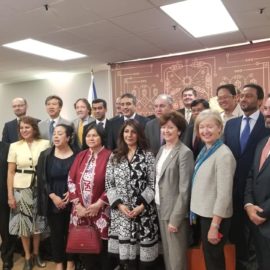 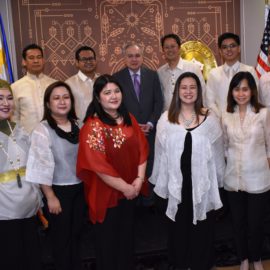 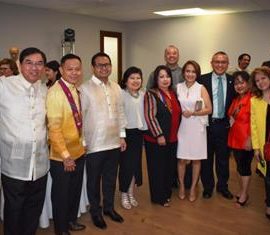 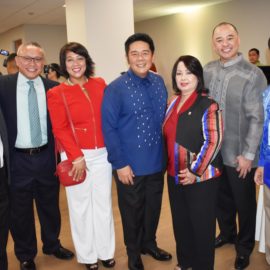 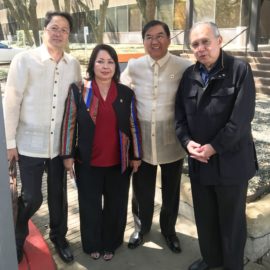 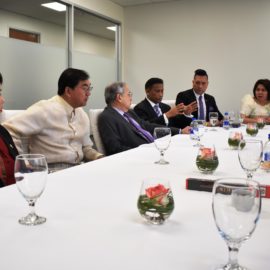 Consul General welcoming the Ambassador and special guests at Consulate 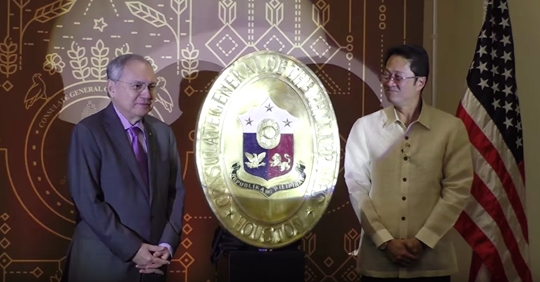 Unveiling of the Philippine Coat-of-Arms at opening of Consulate 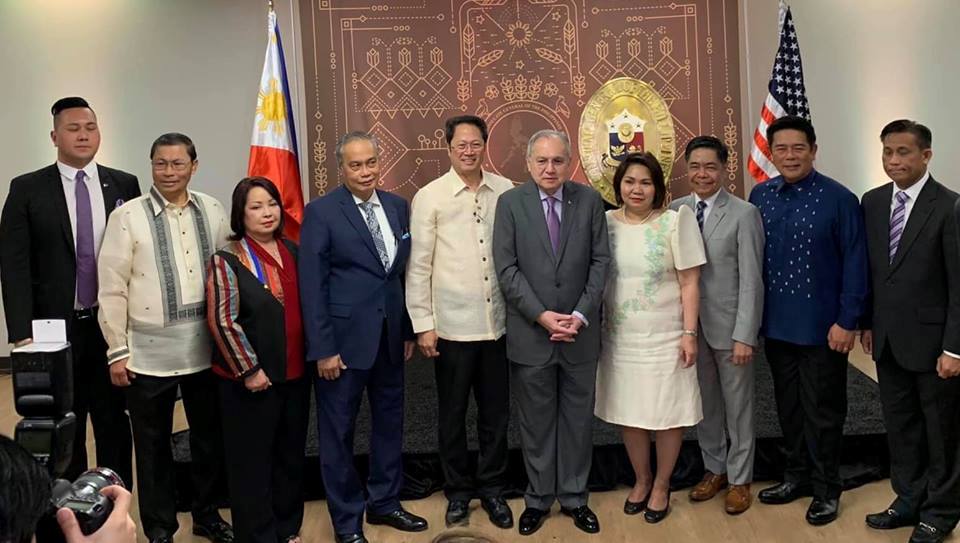 The Ambassador with all the Consuls-General and Honorary Consuls 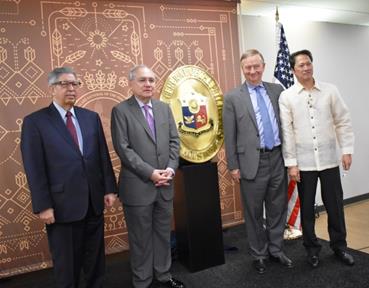 With US State Department Director Robert Hopkins and Panama Con-Gen and Dean of Consular Corps Juan B. Sosa 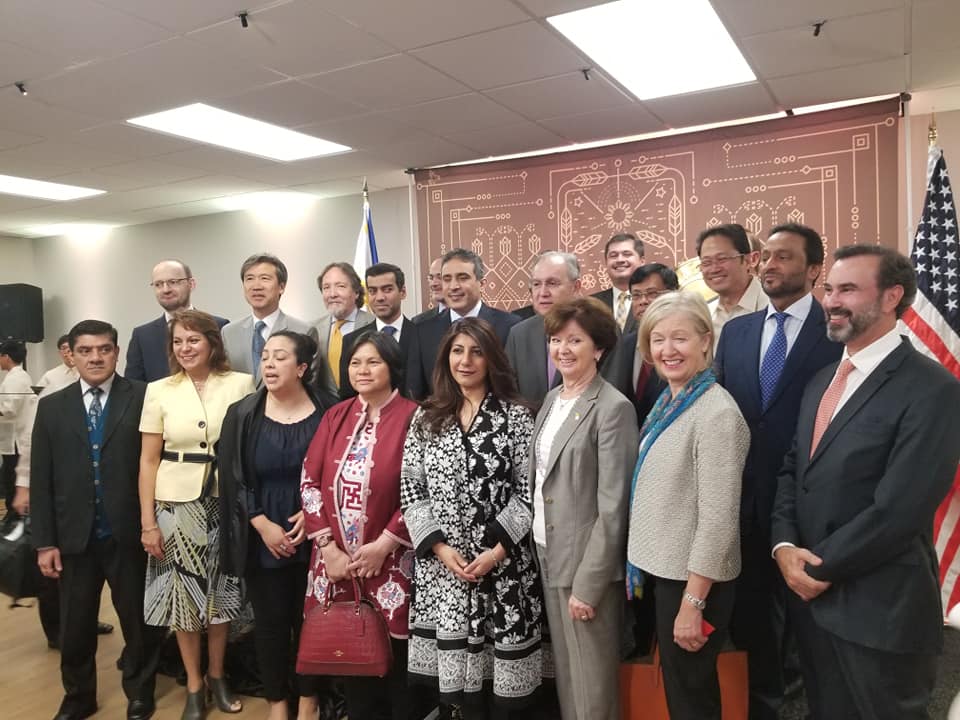 The Houston Consular Corps came to celebrate with the Filipinos 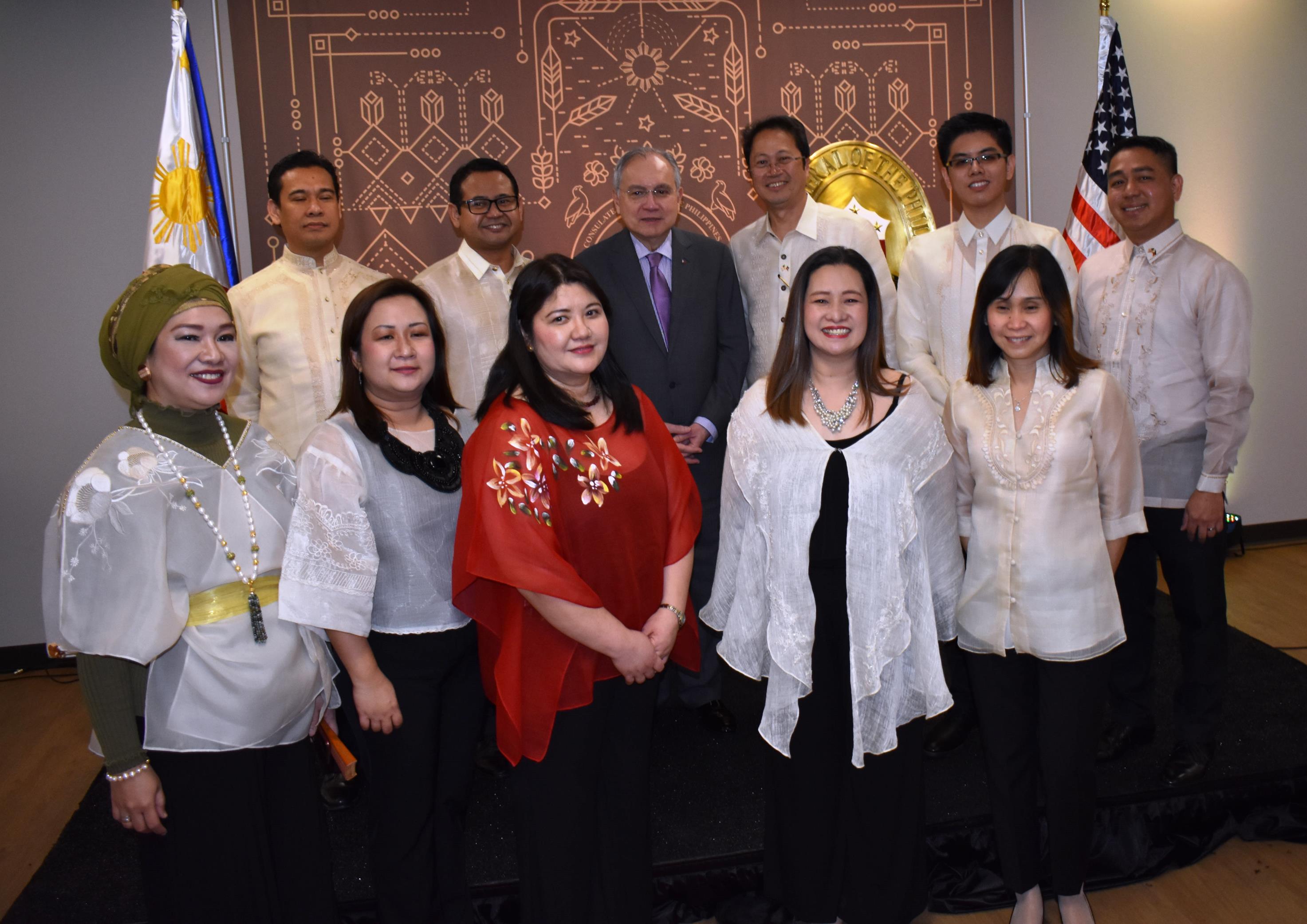 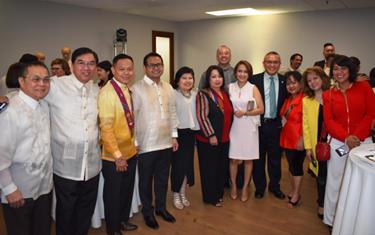 PACC Texas officers from San Antonio, Dallas, Houston and McAllen were there in force. 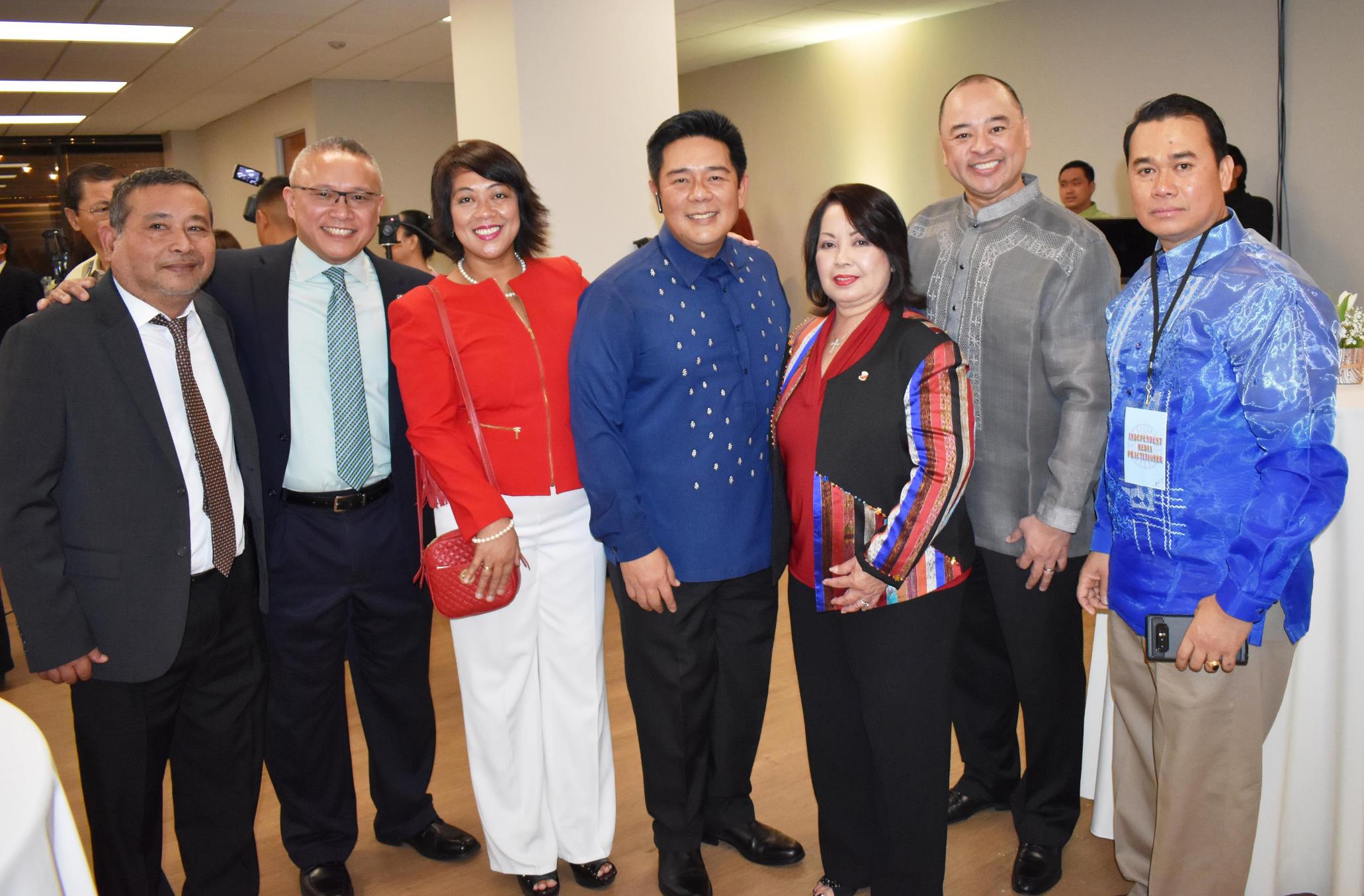 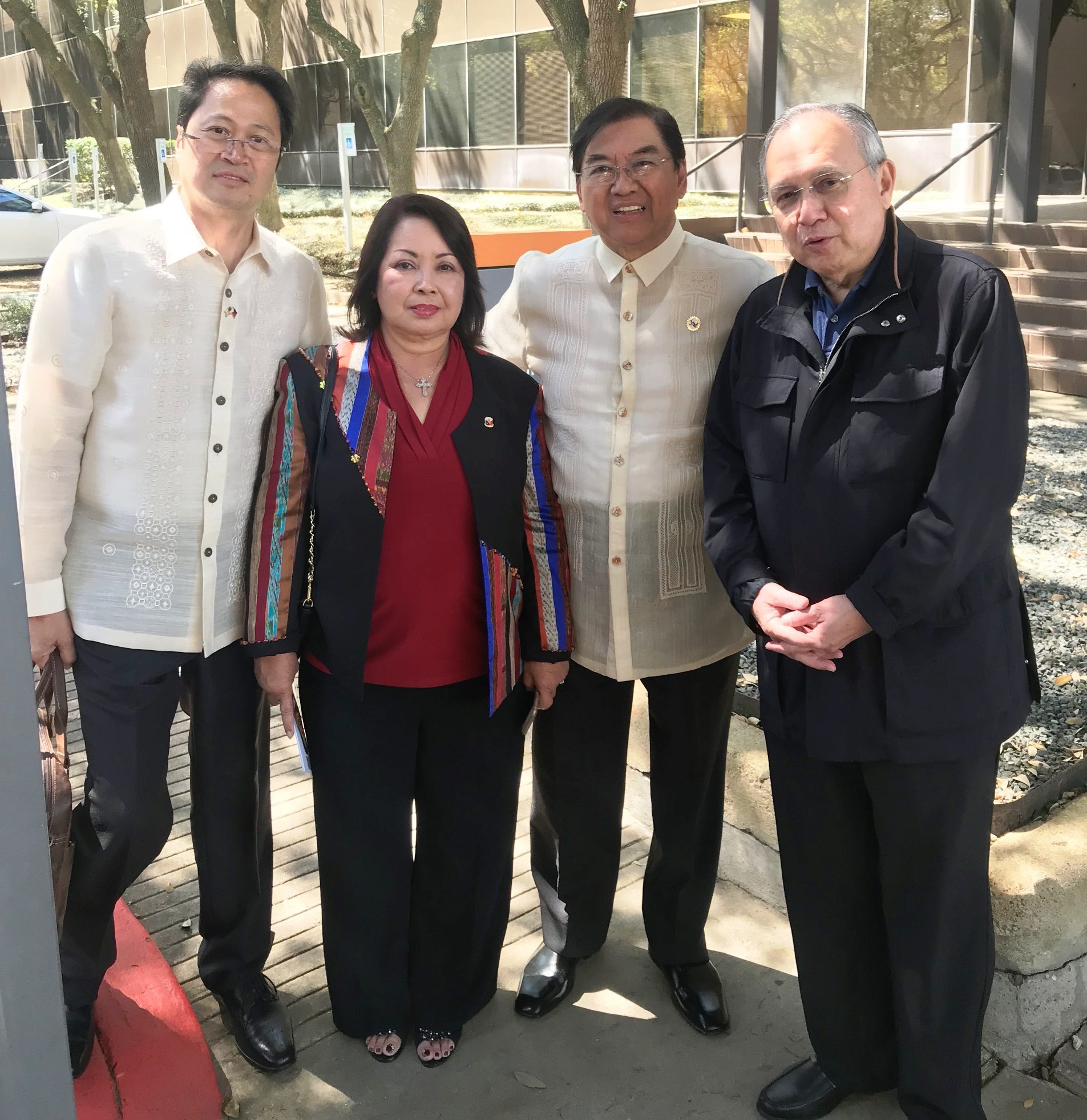 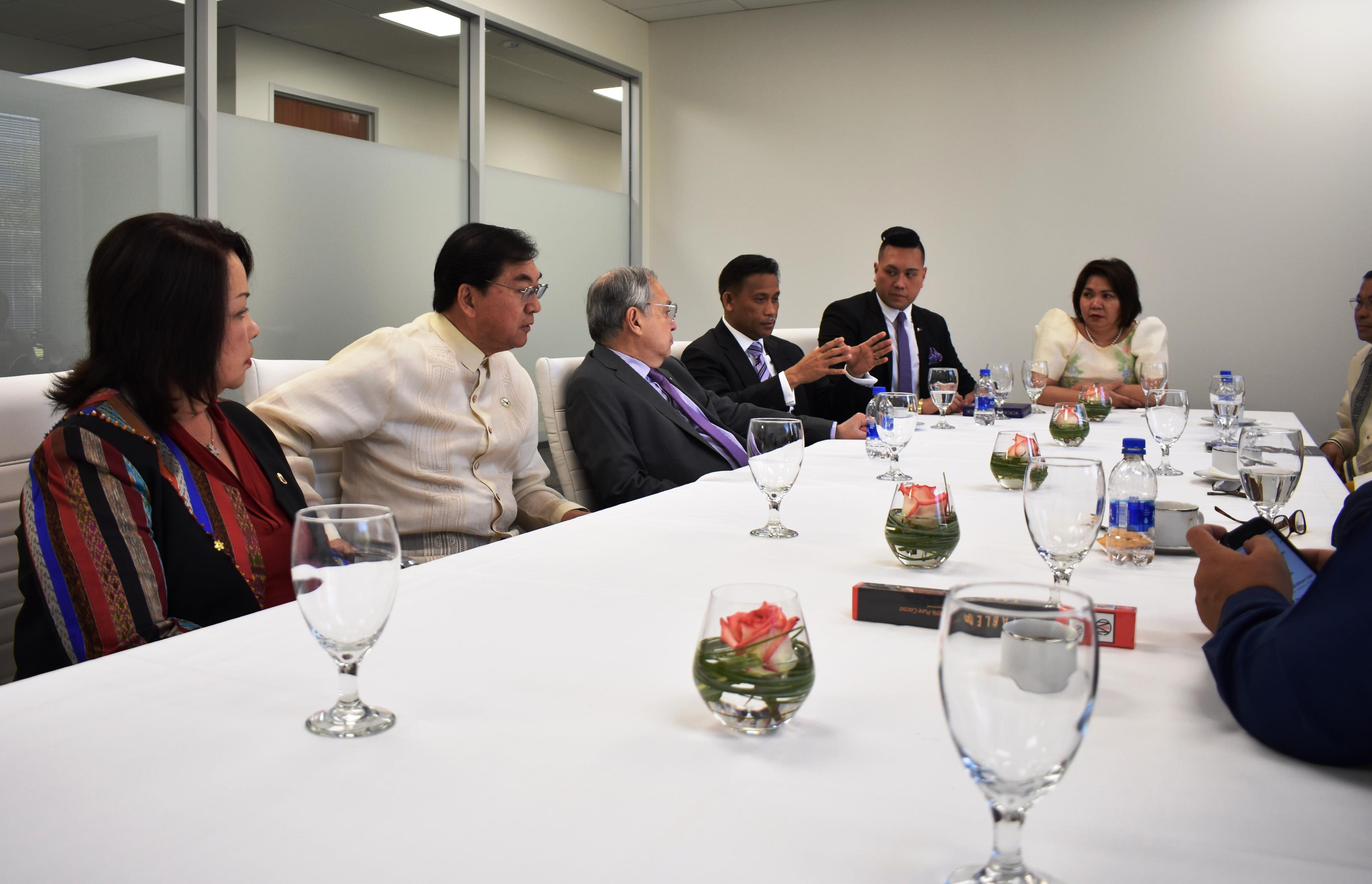 Ethel and Gus Mercado with the Ambassador and the Consuls-General in the U.S.

Houston – It is a big week for the Filipino community in Texas and the southern region of the U.S.

The Philippine Consulate General in Houston celebrated its reopening after it closed 25 years ago. Dignitaries and consuls general from all over the world came to Houston at the new consulate in southwest Houston to celebrate the inaugural ceremony Friday.

“I would say it’s pretty big, because we bring our services to their doorstep rather than have them go to places like Chicago or LA, which used to cover this area. Now they are just minutes away,” the newly-appointed Houston Consul-General Jerril G. Santos said.

Santos said the consulate shut its doors 25 years ago due to budget issues, but officials say with 200,000 Filipinos in need of its services here in Greater Houston, the Philippine government approved its re-establishment.

“This is the beginning of a new day, and it bodes well for the Filipino community,” Mercado said. “Honorary Consul Ethel Mercado here and the Philippine American Chamber of Commerce have somewhat filled the void and mitigated the Texas Filipinos’ suffering with the Consular Outreach Program that we’ve been doing here for 10 years with the Consulate General officials and staff from Los Angeles. We’ve helped 40,000 Filipinos with their consular needs through the Outreach. But this is a very welcomed development. We are delighted that the consulate has finally been reopened.”

“Several former ambassadors and all of the former consul generals and then the community at large have been petitioning the Philippine government for 20 years to make this a reality, and finally it’s here,” Gus Mercado, a longtime Texas Filipino community leader, said. “Our community is very grateful to the L.A. Consulate General headed by Consul-General Adelio Cruz for taking good care of us in the last 10 years,” Mercado added.

Speakers included Santos, the associate regional director of the U.S. Department of State’s Office of Foreign Missions Robert Hopkins as well as the consul general of Panama, Juan B. Sosa. Ambassador Romualdez was the special guest of honor.

“We have 200,000 Filipinos who actually live around here under the jurisdiction of Houston, and I know it’s actually a growing community. We have a lot of Filipinos who are actually migrating here,” Romualdez said.

When the Consulate in Houston was closed down 25 years ago, it was placed under the jurisdiction of the New York Consulate for a few years, then Chicago took over briefly. Then, for 15 years, Texas was placed under the Los Angeles Consulate, along with Nevada, Arizona, New Mexico, Arkansas and the entire southern California. It was when Houston was a part of the Los Angeles consular region that the Outreach program was established, managed by the Honorary Consulate in Dallas and the consulate’s volunteer partners, the Philippine-American Chambers of Commerce in Houston, Dallas and McAllen. In addition to Texas, the new consulate in Houston under Consul General Jerril G. Santos will now serve New Mexico, Arkansas, Louisiana, Mississippi and Oklahoma.

“Anything and everything that a consulate can offer, we are doing that,” Santos said.

The consulate will also work to expand and strengthen ties with the U.S. “Eighty-five percent of Filipinos believe that the U.S. is our most trusted ally, and we will continue to trust in them, just as they trust in us,” Romualdez said.

Many attendees said this day is one they would never forget. “Just to hear our national anthem being sung here gives me goosebumps,” Santos said.

*Editor’s Note: This article and attached images are reprinted and published with permission from the author.