Did you know that on average, most people spend over eight hours a day staring at a screen—at something hoping to take control of our attention and penetrate our minds. Screens have literally taken over our lives. From your phone, television, computer, car, and possibly to even on your face. On average, people with smartphones check their screens 150 times a day—checking Facebook, emails, Twitter, Instagram, taking selfies, responding to messages, or reading the internet. I’ve recently noticed that even while I’m talking to friends, family, and colleagues, we’re talking while looking at our phones—multitasking.

Its quite amazing what our brains are capable of, just the other day, my daughter, acutely focused, was studying while she was listening to a podcast, the TV was on, and beside her laptop was her smartphone—she’s in high school.

I’ve heard a multitude of people (both young and old) say that they prefer to text than call. Sometimes when I’m travelling I don’t even bring a traditional camera with me anymore because my smartphone takes incredible photos—its just so much more convenient and I’ve recently learned image ‘filters’ to make the photo even more aesthetically appealing. Snap the image, tweak it a little bit with these filters then easily share it to my family and friends just inches, miles, or even oceans away. Oh–the times we live in—and whatever we need, there’s surely an app for that.

But online doesn’t consume or dominate every facet of our lives as it may truly seem. And the notion that legacy media—news organizations that predate the internet such as our Asian Journal community newspapers are being pushed aside by the internet is erroneous and misguided. As written in Wired Magazine’s article “Old School Media Is Pulling Way More Viewers Than You Think, an article that appears in their special focus on ‘The News In Crisis’, “But in researching who was watching and reading what at the end of 2016, one thing became clear: Some of the oldest voices in the news are still the biggest. Just the print issue of The New York Times reaches more people every day than the Huffington Post does, and the nightly news shows on ABC, CBS, and NBC each have many millions more viewers than even the highest-trafficked news site.”

I embrace learning new technologies and strategizing how we can implement them for a better experience for you, our readers. After so much time, analysis, and work, we are incredibly excited to launch our new digital platforms to better connect and inform you about your community and your world. If you don’t stay current, the World will pass you by. It’s important to constantly be stimulated by learning something new no matter our age. Despite all the complexities of the modern era and our hesitations for clicking a button with the fear of messing something up in our computer or on the internet, amazing technologies and intelligent designs are created to make our lives better, more convenient—to provide you with a certain level of contentment in simplicity. 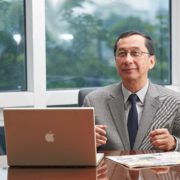