In attendance, were ONE Championship athletes competing on Friday night’s big card. Check out photo and video coverage here, as well as what athletes had to say ahead of their big matchups. 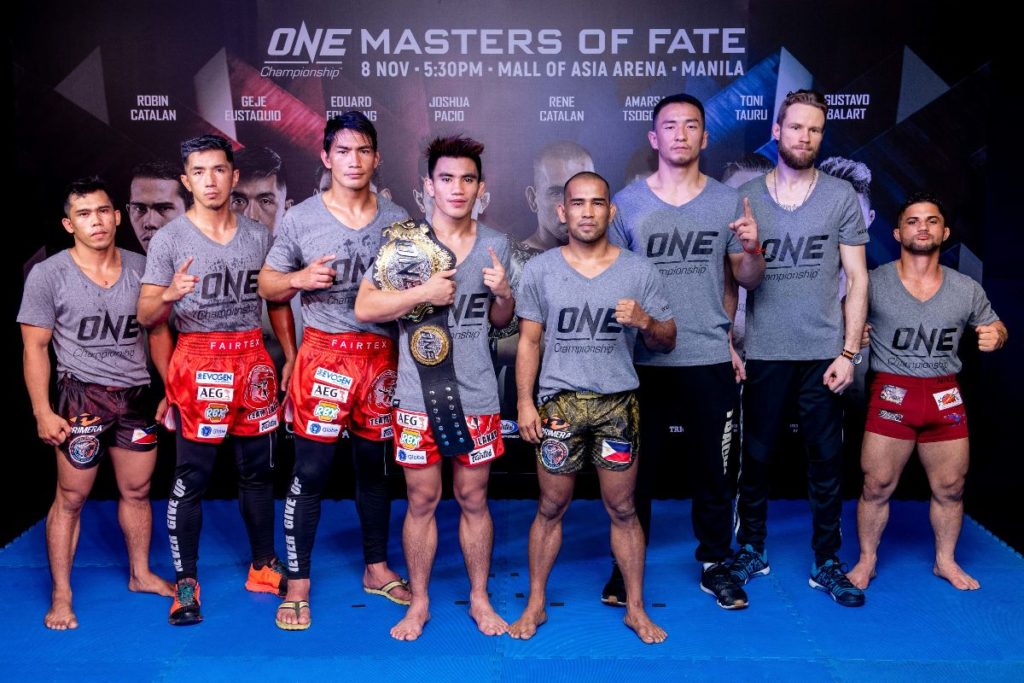 Joshua Pacio, ONE Strawweight World Champion, stated: “Once again, it is an honor to perform in front of my hometown fans in Manila. Putting on a show for all the Filipino people, it’s always something I am excited for. Rene Catalan is a worthy challenger. He’s riding a six-bout winning streak and is full of confidence. I am expecting only the best from him. As always, I take this as an opportunity to test my skills. He’s a veteran who has been fighting his whole life. I have also been impressed by his recent performances, especially against Yoshitaka Naito. It’s rare that a Filipino will fight another Filipino for a World Title. But I’m glad to be part of history.”

Rene Catalan, ONE World Title Challenger, stated: “I am super confident heading into this matchup. Becoming a mixed martial arts world champion has been a goal of mine for a long time. Now, I have the opportunity to fulfill my dream. I know chances like this don’t come often, so I’m giving this everything I have. I don’t plan on leaving the Circle without that belt. Joshua Pacio is a young champion, he still has his entire career ahead of him. I respect his skills and his journey up to this point. But once that cage door shuts, it’s go time. No matter who wins, the honor and glory go to the Philippines.”

Eduard Folayang, former ONE Lightweight World Champion, stated: “I am glad to be back competing again. I know my back is against the wall right now. This year hasn’t exactly gone to plan. But I’ve been working hard. I know victory is important this time. I’m facing a hungry opponent from Mongolia who will be looking to beat a big name. I’ve been in this situation before and I know what I need to do. I’m a veteran of this sport, and I’ve been doing this for a long time. Still, I feel confident in making another run at the ONE Lightweight World Title. My journey starts anew at home in Manila.”

Geje Eustaquio, former ONE Flyweight World Champion, stated: “I’m coming into this next bout with something to prove. Things haven’t gone my way this year, and I’ve had a lot of learning opportunities. I can honestly say that I am a better martial artist now than ever before. This rematch with Toni Tauru is very important for me, because it’s a win I would like to get back. I want to be known as ‘The King of Rematch’ and beating Tauru will prove that. Watch out Manila! Team Lakay is coming!”

Robin Catalan, ONE Athlete, stated: “First of all, I’m really excited to be a part of this card. The Philippines has the most amazing martial arts fans in the world, and I am proud to represent my country on the global stage. I’ve put a lot into this camp, and I am fixated on getting the victory. All my hard work will pay off soon. I would like to thank ONE Championship for continuing to give me the opportunity to showcase my skills. I feel like I’ve improved a lot since my first fight. Now I’m ready to show the world that I’m a serious contender in this division. Thank you for all the support, Manila!”

About ONE Championship™
ONE Championship (ONE) is the largest global sports media property in Asian history, and the largest producer of millennial live sports content in Asia. Headquartered in Singapore, ONE is the Home of Martial Arts, and is the world’s largest martial arts organization, hosting bouts across all styles of martial arts such as Muay Thai, Kickboxing, Karate, Kung Fu, Silat, Sanda, Lethwei, Mixed Martial Arts, Tae Kwon Do, Submission Grappling, and more. ONE hosts the biggest sports entertainment events across Asia, featuring some of the world’s best martial artists and world champions on the largest global media broadcast in Asia. ONE Esports, a subsidiary of ONE Championship, runs Asia’s largest global esports Championship Series with some of the biggest blockbuster game titles in the world. In addition to its digital platforms, ONE Championship broadcasts to over 2.6 billion potential viewers across 140+ countries with some of the largest global broadcasters, including Fox Sports, ABS-CBN, Astro, ClaroSports, Startimes, Thairath TV, Skynet, Mediacorp, Great Sports, Tencent, Star TV, Mediaset Italia, ProSiebenSat.1, Dubai Sports, Turner Sports, and more.