●  Online hiring in the Philippines experienced a strong growth rate of 17% year-on-year between December 2017 and 2018, as per the latest Monster Employment Index (MEI).

●  The Hospitality industry recorded the best growth for December, with 34% year-on-year, followed by Healthcare and Retail.

●  The only industry in the Philippines to witness a decline in online hiring in November 2018 was Education, with an 8% drop year-on-year.

●  All job roles witnessed positive growth, and Purchase/Logistics/Supply Chain professionals were found to be most in-demand, with a 35% y-o-y jump. 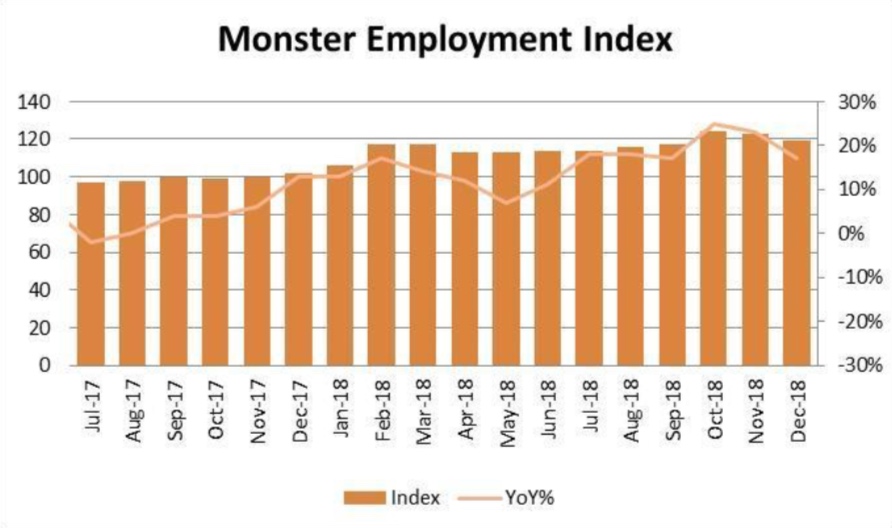 MANILA, 29 JANUARY 2019 – Online hiring growth in the Philippines experienced a strong growth rate of 17% year-on-year between December 2017 and 2018, though this was a slight drop from November’s 23% y-o-y growth rate, according to findings from the Monster Employment Index (MEI).

The Hospitality industry recorded the best growth for December, with a 34% year-on-year rise, up by 8 points from November’s 26% growth. This was closely followed by the Healthcare and Retail industries with 33% and 32% y-o-y growth, respectively.

Other industries that recorded notable growth are Logistics with 26%, BFSI with 19% and Advertising with 13% growth between December 2017 and 2018, respectively.

The only industry to record a decline out of the 12 industries monitored by the Index was Education, with an 8% decline between December 2017 and 2018, falling by 3 points from November’s 5% yearly drop rate.

The Monster Employment Index (MEI) is a gauge of online job posting activity compiled monthly by Monster.com. It records the industries and occupations that show the highest and lowest growth in recruitment activity locally.

All the occupation categories monitored by the Monster Employment Index registered positive year-on-year growth for the month of December.

The highest growth was recorded by the Purchase/Logistics/Supply Chain profession with 35% growth over a period of one year.

This was followed by Healthcare and Finance & Accounts with 29% and 26% growth between December 2017 and 2018, respectively.

Other notable professions such as Marketing & Communications, Hospitality & Travel and Customer Service clocked in growth numbers of 16%, 14% and 10%, respectively, between December 2017 and 2018.

“Online hiring in the Philippines has been consistently high for the year and will likely remain so in the coming year as well. In its World Economic Situation and Prospects 2019 report, the United Nations said they project the Philippines’ GDP growth to be 6.5% in 2019, up from 6.3% in 2018. The government is stepping up implementation of the “Build, Build, Build” program, paving the way forward for economic growth which will further drive hiring growth,” said Abhijeet Mukherjee, CEO of Monster.com – APAC and Middle East.

The Monster Employment Index is a monthly gauge of online job posting activity, based on a real-time review of millions of employer job opportunities culled from a large representative selection of career websites and online job listings across the Philippines. The Index does not reflect the trend of any one advertiser or source, but is an aggregate measure of the change in job listings across the industry.

Philippine government focused on bringing jobs back for overseas Filipinos, ready to engage with foreign governments

Polish that resume! Potential job opportunities in the BPO industry for newly arrived overseas Filipinos in the Philippines