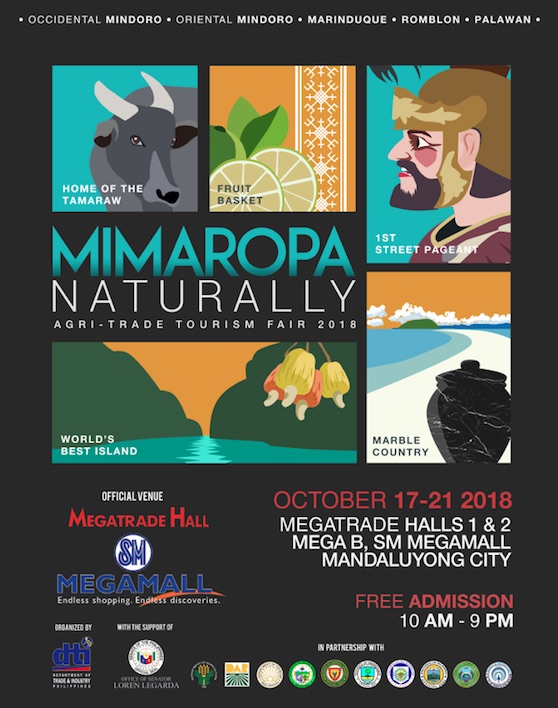 The Department of Trade and Industry (DTI) MIMAROPA Region hopes to bag P50 million in sales in its fourth edition of MIMAROPA Naturally Agri-Trade and Tourism Fair slated on October 17-21, 2018 at the Megatrade Halls 1 and 2 SM Megamall in Mandaluyong City.

Bannering local products and tourism destinations from the provinces of Occidental and Oriental Mindoro, Marinduque, Romblon, and Palawan, the 2018 MIMAROPA Naturally will be participated by over 130 micro, small and medium enterprises (MSMEs) from the region, and will also feature a One Town, One Product (OTOP) Next Gen special setting.

DTI MIMAROPA Regional Director Joel Valera said that the agri-trade and tourism fair will help MIMAROPA MSMEs produce high quality and competitive products and penetrate mainstream domestic and export markets, which will result job generation locally to support the Trabaho at Negosyo agenda of the administration.

Besides the OTOP Next Gen special setting, the agency also invited 129 institutional buyers from Metro Manila for the closed door buyers’ hour to help MSMEs expand and widen the reach of their products.

“We are proud to announce that the DTI MIMAROPA Region, in coordination with other concerned government agencies and local and provincial units in the region, will open another year of MIMAROPA Naturally to provide an avenue to MIMAROPA MSMEs to better market their products to buyers in Metro Manila and establish constitutional buyers. Hopefully some of the MSMEs reach the export market,” Valera said.

“We hope that the OTOP Next Gen special setting and closed door buyers’ hour will lure more Filipinos to patronize our products,” he added.

The special setting will feature MSME products that were assisted by the agency through the OTOP Next Gen program by improvement and innovation in the areas of quality, product development, design, packaging, standards compliance, marketability, production capability, brand development, among others.

Products that will be exhibited during the five-day agri-trade and tourism fair include processed food, furniture and home furnishings, wearables, such as fashion accessories, bags and footwear, and gifts and holiday decors.

In its 2017 edition of MIMAROPA Naturally, the fair raked P47.9 million in sales which was participated by 131 MSMEs.

The 2018 MIMAROPA Naturally Agri-Trade and Tourism fair is in partnership with the Department of Agriculture (DA), Department of Agrarian Reform (DAR), Department of Tourism (DOT), and in coordination with the provincial and city governments of Occidental and Oriental Mindoro, Marinduque, Romblon, and Palawan.

PH total exports up 4.1% in first half; DTI eyes stronger manufacturing base to sustain increase

DTI to promote IT-BPM industry in the Australian Market