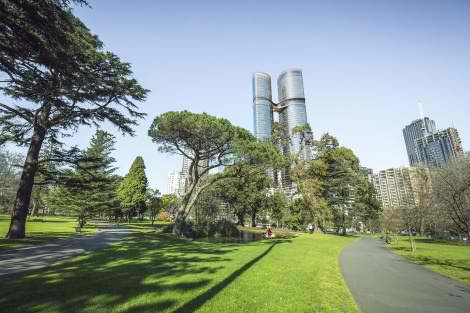 Representatives of S P Setia, Multiplex, Shangri-La, and the City of Melbourne gathered to break ground on what will become one of Melbourne’s most iconic developments, Sapphire By The Gardens located at 308 Exhibition Street, Melbourne yesterday.

The two towers will be joined by a striking Sky Lounge on level 46 overlooking the UNESCO world heritage listed, Royal Exhibition Building and its surrounding Carlton Gardens.

Speaking at the event the CEO of S P Setia’s Australian operations, Mr Choong Kai Wai, said that he was excited to see work commence on site.

“Today’s ground-breaking ceremony represents a significant milestone for Setia and further signals our commitment to developing a pipeline of projects that are highly sought after by the Australian market,” Mr Choong Kai Wai said.

“The secret behind Sapphire By The Garden’s success, with over 95 per cent of the project sold, was the substantial underlying demand for premium, highly-liveable and world class residential apartments in Melbourne’s CBD. The market wanted a high-quality product and we’re proud to have delivered that at this site.”

The $565 million build contract to deliver Shangri-La Melbourne and Sapphire By The Gardens was recently awarded to premier global construction company, Multiplex.

Regional Managing Director of Multiplex Victoria, Graham Cottam, said that he anticipated this build would become one of the organisation’s, and Victoria’s, most significant construction projects over the next three years.

“We are thrilled to be appointed by S P Setia to deliver this world-class mixed-use development, drawing upon our extensive experience constructing high-rise buildings in the city,” Mr Cottam said.

“As one of Multiplex’s largest projects currently underway in Australia, it is set to generate significant employment throughout its construction and beyond.”

With construction anticipated to take three years, the project is expected to generate over 1,000 jobs during the construction and initial hotel operational period; representing a significant economic impact for Victoria.

Located in the north east corner of Melbourne’s CBD, near the culture and theatre precinct and overlooking the Carlton Gardens and Royal Exhibition Centre, the project’s 500-room luxury hotel is perfectly positioned to cater for tourists visiting Melbourne.

“Melbourne is one of Australia’s top business and tourism cities and we are pleased to partner SP Setia for our expansion in the city. Shangri-La Hotel, Melbourne will be part of an iconic building complex within walking distance of diverse offerings including vibrant retail and dining hubs, as well as cultural and theatre attractions. We couldn’t have chosen a more strategic and spectacular location to site our hotel and to introduce our Asian-inspired hospitality to all visitors once the complex is completed.” he said.

About SP Setia
Since its incorporation in 1974, S P Setia has been a household name in the property development industry. The Group is recognised as one of Malaysia’s leading listed real estate players with a portfolio that encompasses townships, eco-sanctuaries, luxury enclaves, high-rise residences, commercial and retail developments.

S P Setia was ranked No.1 in The Edge Malaysia Top Property Developers Awards for the 9th time in 2016, the only developer to have achieved this feat since the inception of the awards. S P Setia is also the only Malaysian developer to have received 7 FIABCI Prix d’Excellence Awards by the International Real Estate Federation (FIABCI) and 9 FIABCI Malaysia Property Awards.

The Group is well-established in the three key economic centres of Malaysia, namely Klang Valley, Johor Bahru and Penang and also has a project in Sabah. Its international reach now includes five countries which are Vietnam, Australia, Singapore, China and the United Kingdom.

As of 31 March 2017, the Group has 30 ongoing projects, with an effective stake of 5,141 acres in undeveloped land banks remaining and RM75.72 billion in Gross Development Value.

About Multiplex
For more than 55 years Multiplex has been constructing iconic projects around the world and has established itself as a premier global construction company with offices in Australia, India, Europe, the Middle East and Canada.

Established in 1962, work to date* comprises more than 1,000 projects with a combined value of US$80 billion. Multiplex has expertise across the residential, health, retail, commercial, tourism, education, engineering and infrastructure sectors, and as a group has earned over 700 industry awards. For more information, go to multiplex.global.
*Works to date includes current and completed projects

Hong Kong-based Shangri-La Hotels and Resorts, one of the world’s premier hotel owners and operators, currently manages over 100 hotels globally in 76 destinations under the Shangri-La, Kerry, Hotel Jen and Traders brands.  Prominently positioned in Asia, the group has established its hallmark of “hospitality from the heart” over four decades in Asia Pacific, the Middle East, Europe, North America and the Indian Ocean.  The group has a substantial development pipeline with upcoming projects in Australia, Bahrain, mainland China, Cambodia, Indonesia, Malaysia and Saudi Arabia. For more information, please visit www.shangri-la.com.

PH Cacao and Chocolate Debut at Int’l Fair in Brussels

Here’s Your Itinerary for the Ultimate Melbourne Trip