PASIG CITY, Nov. 10 — To further educate learners, teachers, parents, the school, and the community on how children can be safe in the online world, the Department of Education (DepEd), in collaboration with Stairway Foundation and the Internet and Mobile Marketing Association of the Philippines (IMMAP), officially launched the #BeCyberSafe project on November 9, 2018 at DepEd Bulwagan ng Karunungan.

Consisting of three major components, namely, Project for Keeps, Dalir-Eskwela, and Chatbot, the #BeCyberSafe project is aimed at ensuring that the scope of child protection extends to the cybersphere.

Project for Keeps is a social media movement created to empower children, with the help of their guardians, to take control of their online profiles, and keep themselves safe from online strangers and predators.

Coined from the words daliri (finger) and eskwela (school), Dalir-Eskwela offers a range of educational materials including videos, brochures, and posters that discuss issues on cybersafety, from cyberbullying to online chatting, gaming, and pornography. This component of the #BeCyberSafe project emphasizes the power of the fingers in connecting a child to the online world, as well as the threats posed by this online connectivity.

Finally, the Chatbot, which is still in its development phase, is a social media page with a messaging feature which will be used as a helpline where child protection issues faced in the cyberspace may be reported and addressed.

“The launching of this program is certainly very welcome because we are now recognizing that harm can be inflicted not only in physical ways, not only by the destruction of our infrastructure and our facilities, the books that we read, what we teach our children, but also through cyberspace,” DepEd Secretary Leonor Magtolis Briones stated. “We extend our gratitude to our partners for helping us ensure the best interest of our learners,” she added.

“The Child Protection Policy of DepEd aims to nurture learners in a safe environment not only in the physical sphere, but also the cyberspace. In this digital age when children socialize and spend considerable time online, DepEd recognizes that their right to protection against violence and abuse should also be realized online,” DepEd Undersecretary for Legal Affairs Josephine Maribojoc shared.

“A child in the cyber world is a whole person with dignity, as much as a child in the physical world. Let us respect and protect each one of them, wherever they may be,” she added. 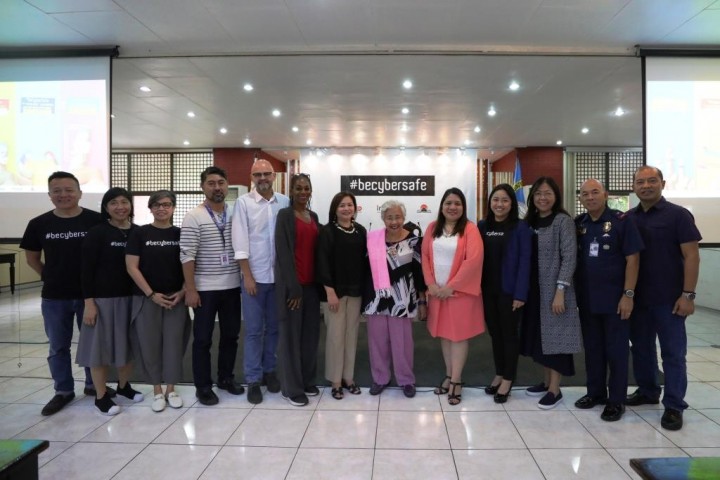 Also present in the press launch and conference were DepEd Undersecretary for Finance-Budget and Performance Monitoring Annalyn Sevilla; Stairway Foundation Co-founder Lars Jorgensen and Senior Advocacy Officer Ysrael Diloy, who discussed the landscape of child online protection; and IMMAP Advocacy Committee Head Karen Alba-Alday who presented the cybersafety advocacy. Representatives from various non-government and government agencies including the Philippine National Police (PNP), Department of the Interior and Local Government (DILG), Department of Social Welfare and Development (DSWD), Commission on Human Rights (CHR), and the Council for the Welfare of Children (CWC), also expressed their commitment and support to the initiative.

The launch also forms part of the 26th National Children’s Month (NCM) celebration this November with the theme, “Isulong: Tamang Pag-aaruga Para sa Lahat ng Bata.”  The month-long celebration commemorates the adoption of the Convention on the Rights of the Child by the United Nations General Assembly on November 20, 1989, and seeks to instill its significance in the Filipino consciousness.

The #BeCyberSafe initiative is one of the promising practices highlighted in the first National Child Protection Summit held last August 23 and 24 at the SMX Convention Center in Pasay City.

–
For more information, visit the Department of Education website at http://deped.gov.ph.

The essence of mental health in education’s new set-up

Teachers praised by Secretary of Education at the 12th Gabay Guro Grand Assembly, themed “Building the Nation, One Teacher at a Time”