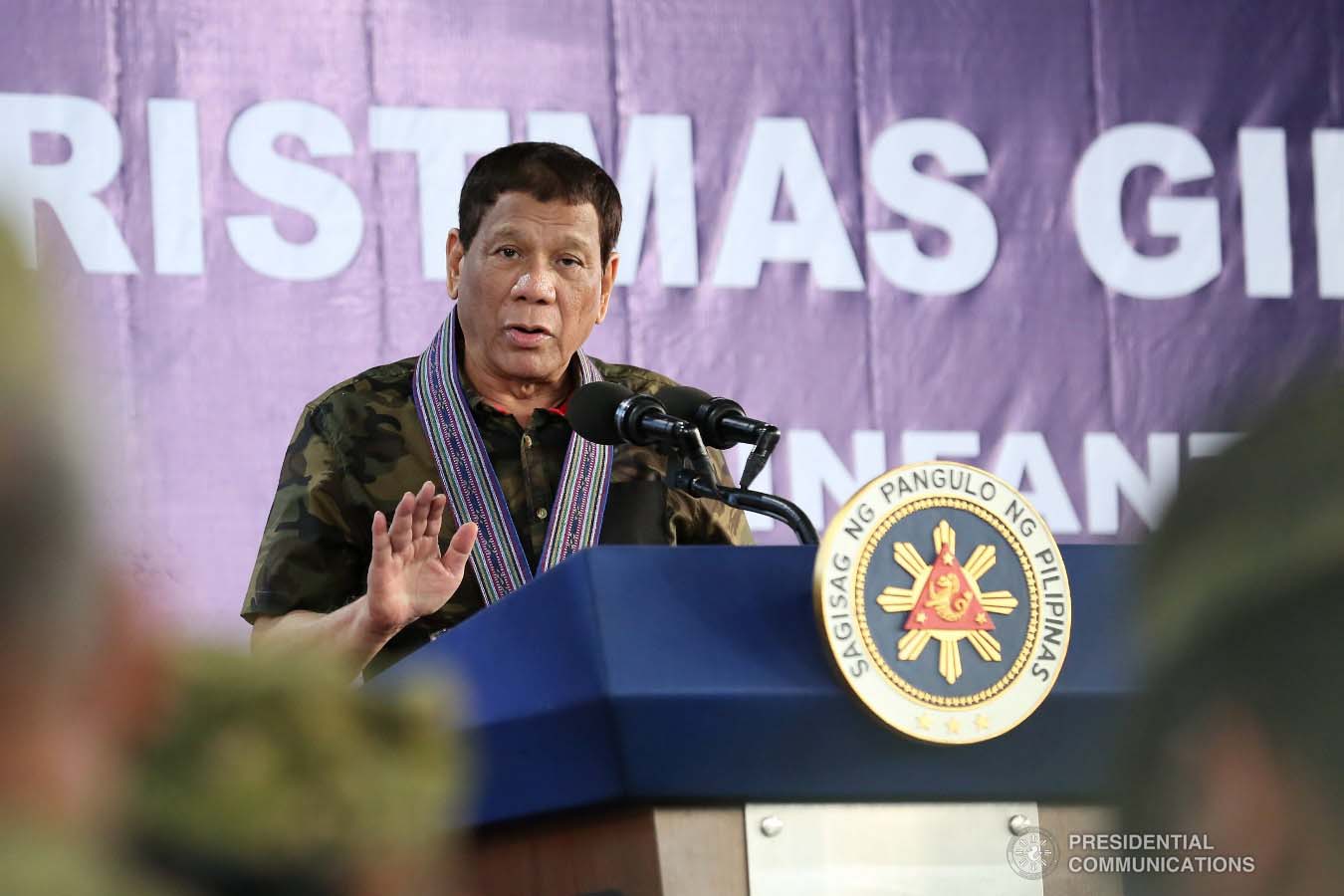 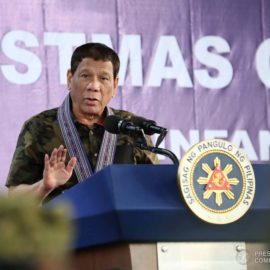 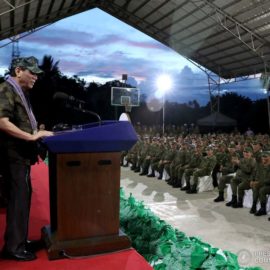 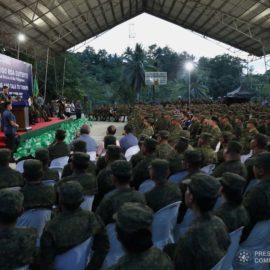 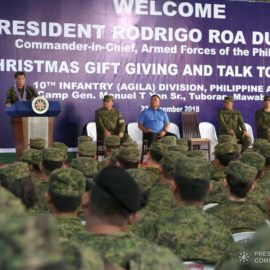 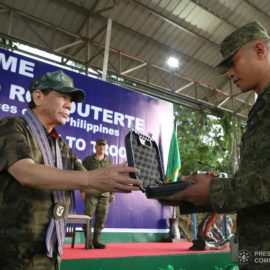 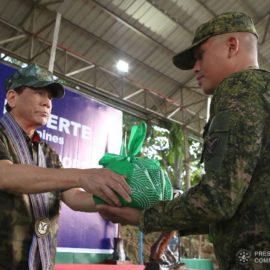 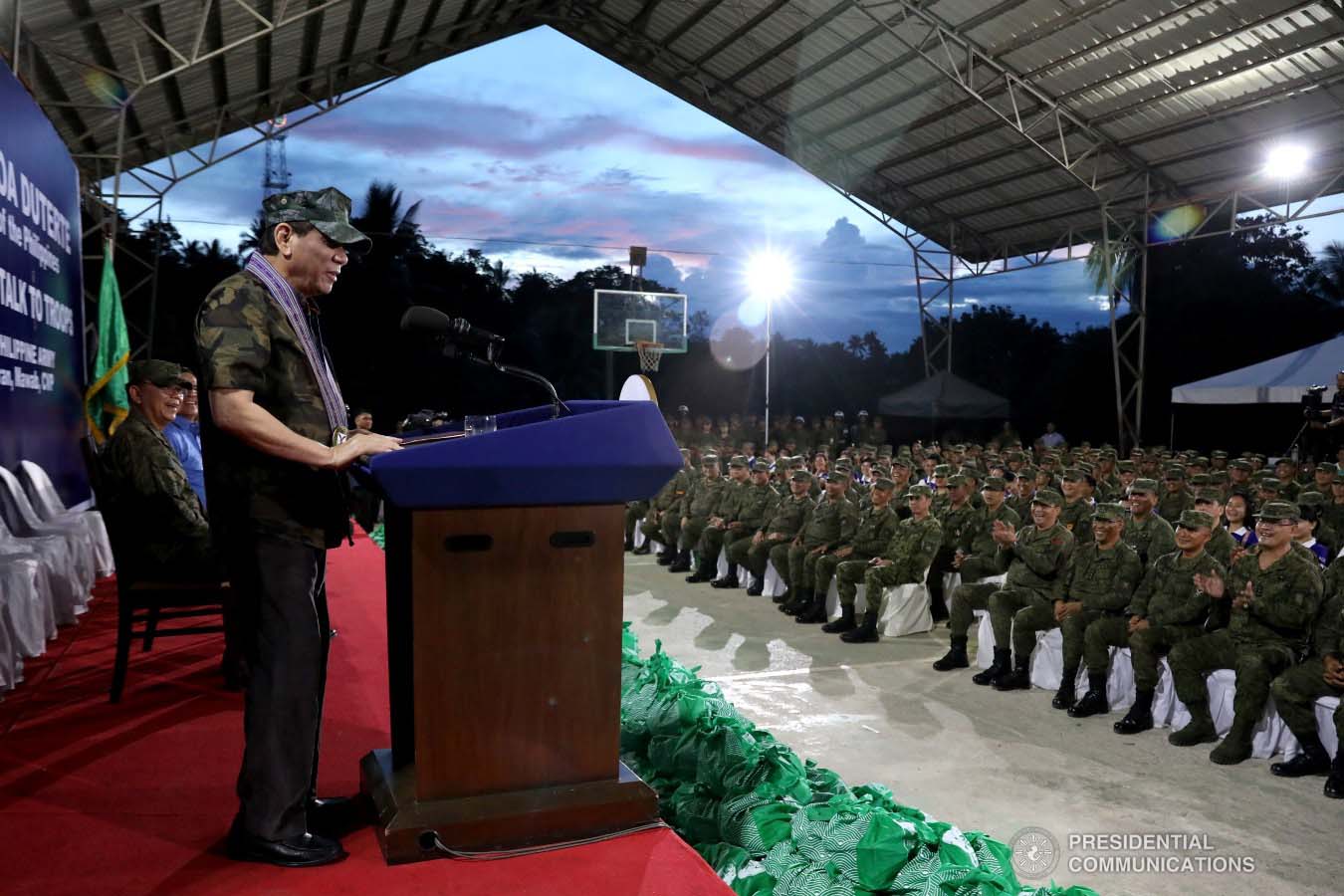 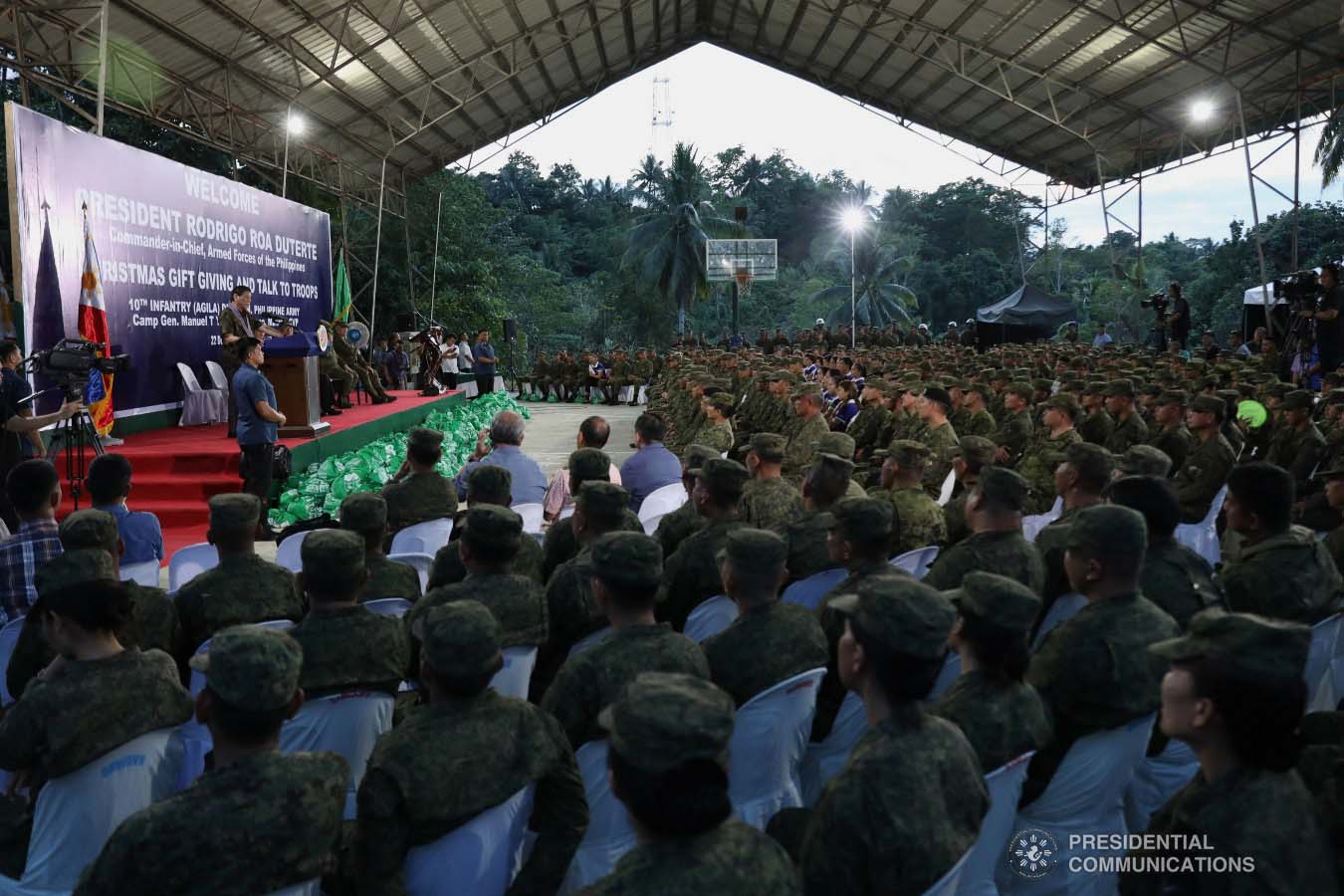 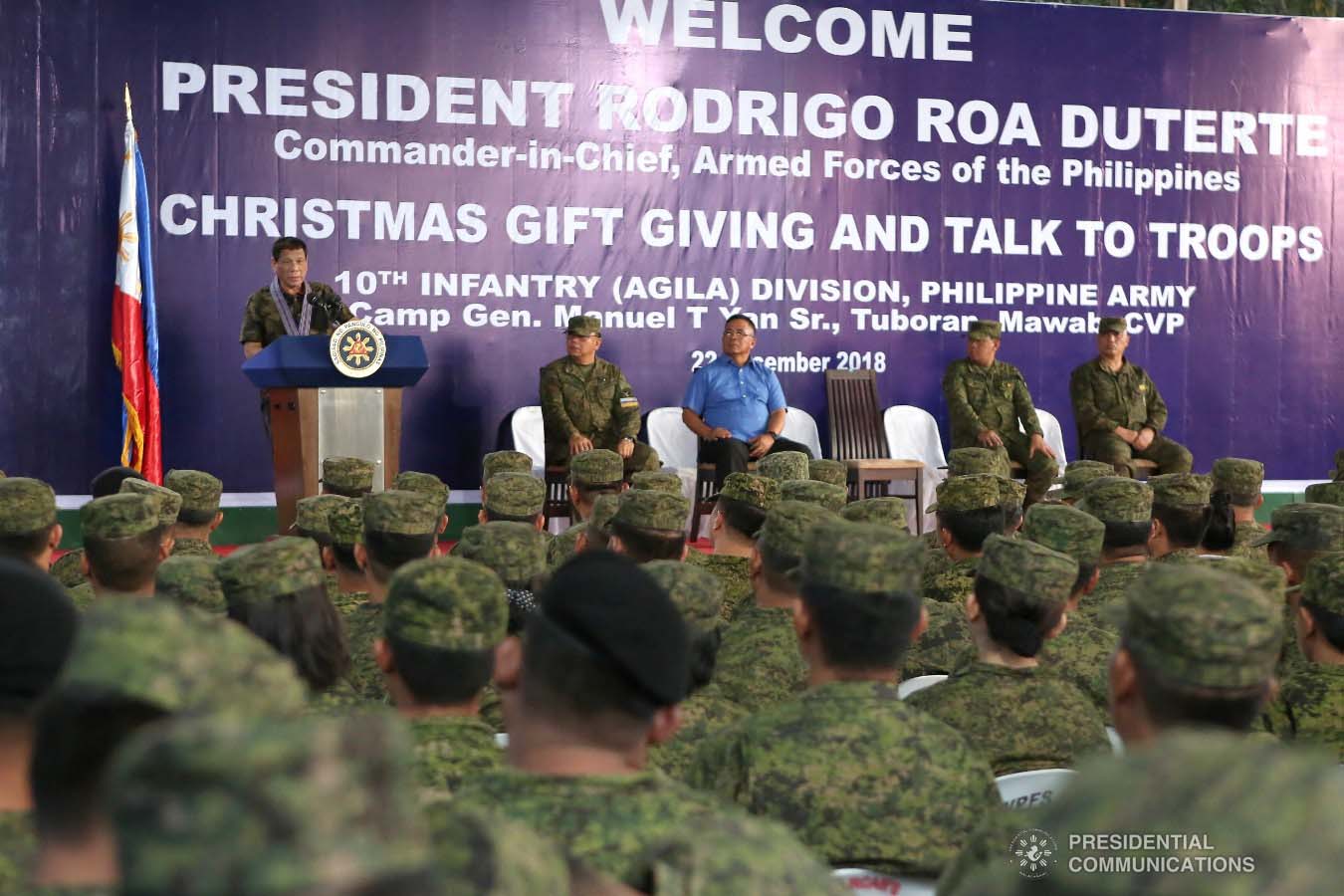 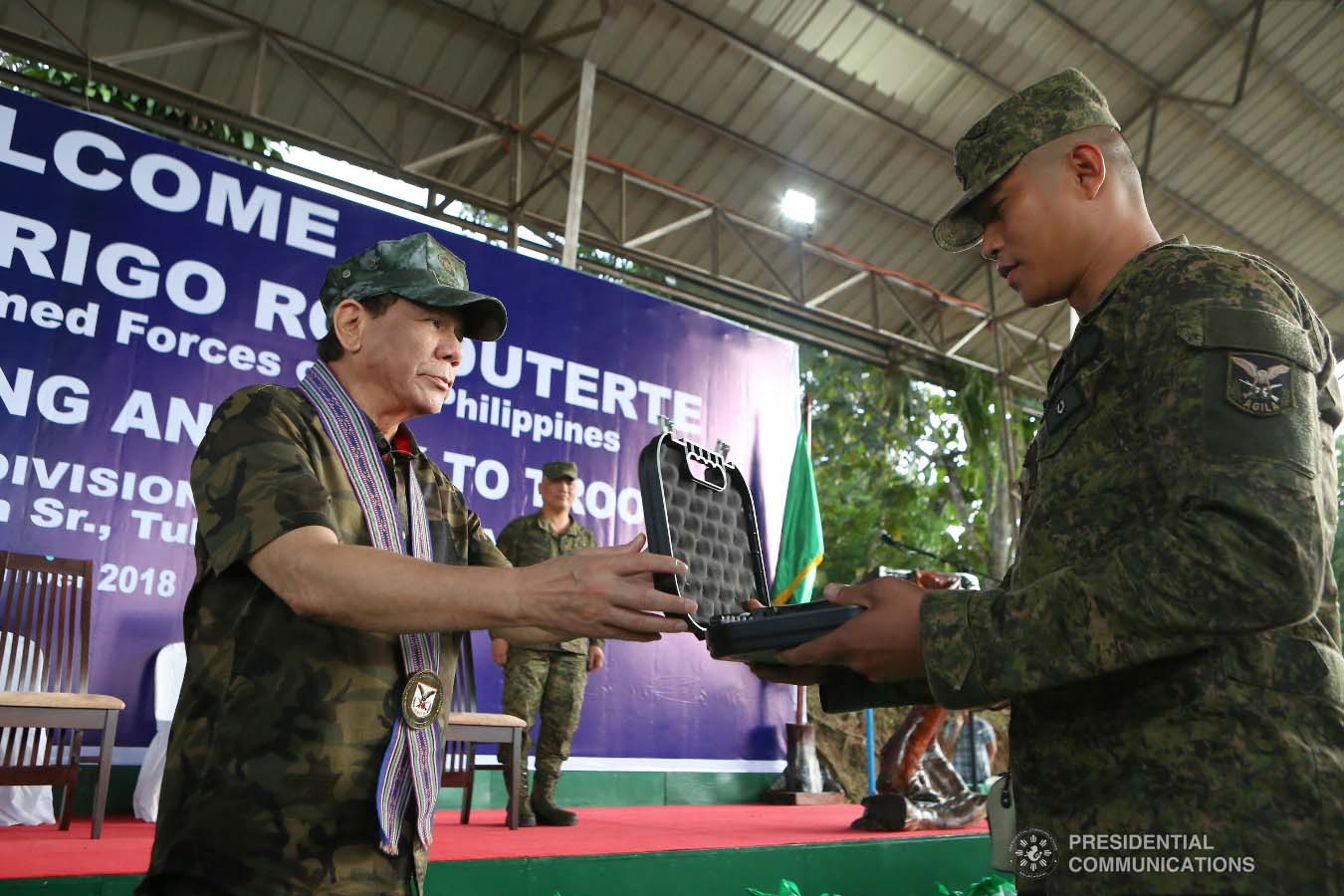 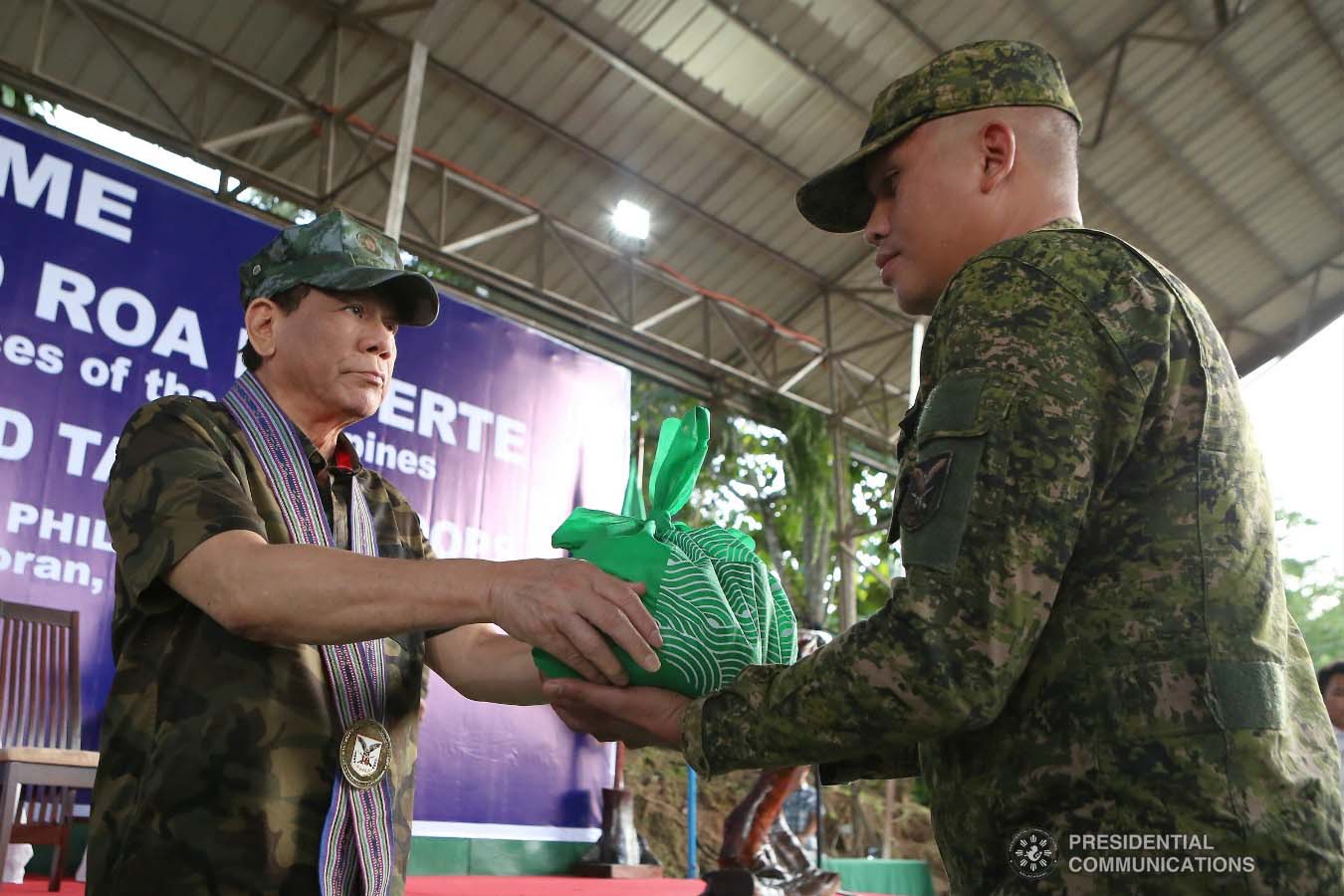 COMPOSTELA VALLEY – President Rodrigo Roa Duterte on Saturday, December 22, led the Christmas gift-giving to members of the Armed Forces of the Philippines (AFP).

The Chief Executive presided over the gift-giving activity at the 10th Infantry Division, Camp General Manuel Yan Sr., Barangay Tuburan in Mawab, hailing the division for securing his hometown Davao City, among others.

“It is an honor and a privilege for me to join the brave men and women of the Philippine Army’s 10th Infantry Division, which has always been close to my heart because my home city of Davao has always been under your care and protection,” said President Duterte in his speech.

President Duterte extended his Holiday greetings to the soldiers and their families whom he also lauded for taking part in the sacrifices made by the soldiers in the line of duty to secure the nation.

He also hailed the members of the 10th Infantry Division for their “gallant efforts” in combatting the decades-old communist insurgency in the country.

“The surrender of almost 8,000 communist rebels and the recovery of some 700 firearms just this year alone speak well of the division’s commitment to end the rebellion for good,” he said.

“I also call on our troops, especially the men and women of the 10th Infantry Division, to remain committed to your sworn duty to protect our people and defend our democratic rights. And I assure you of my full support as we continue to ensure the security of Mindanao until the lifting of Martial Law,” he added.

“As we celebrate Christmas and welcome the New Year, I am confident that the Armed Forces of the Philippines will continue to ensure that peace will reign across our nation for the years to come,” he said.

Members of the 10th Infantry Division received around 2,000 gift packs, aside from their cash bonus.

Meanwhile, President Duterte also appealed to members of the New People’s Army (NPA) to surrender and return to the fold of the law.

“I am, therefore, taking this opportunity to call on communist terrorists to abandon their extremist activities and return to the fold of the law,” he said.

“Discard the outmoded ideology that has led you astray and reintegrate into society so you can lead more dignified lives,” he added.

The Commander-in-Chief then stressed that he hopes for the government’s efforts to achieve lasting peace which were made “in good faith” to be reciprocated, saying that he does not want to see the country disunited.