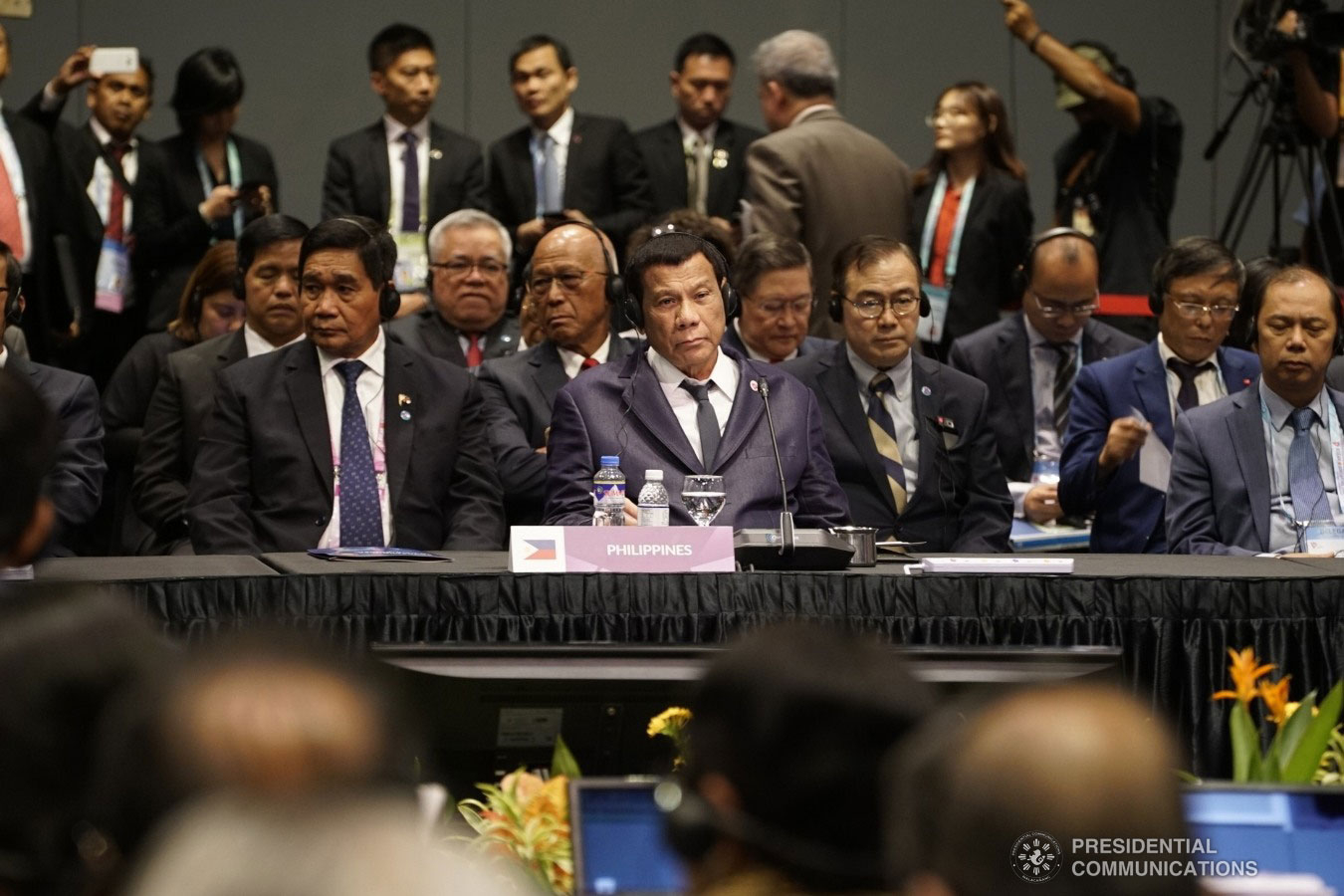 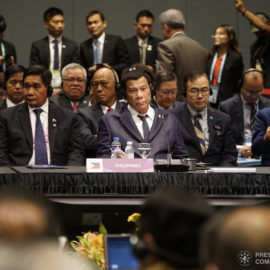 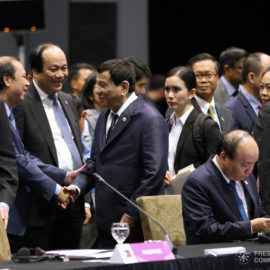 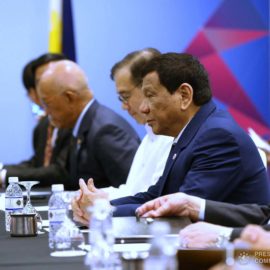 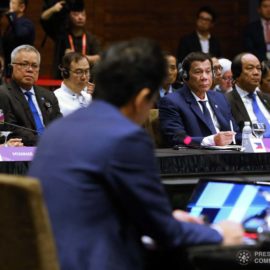 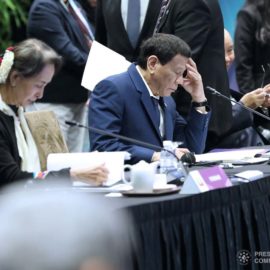 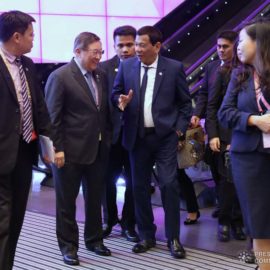 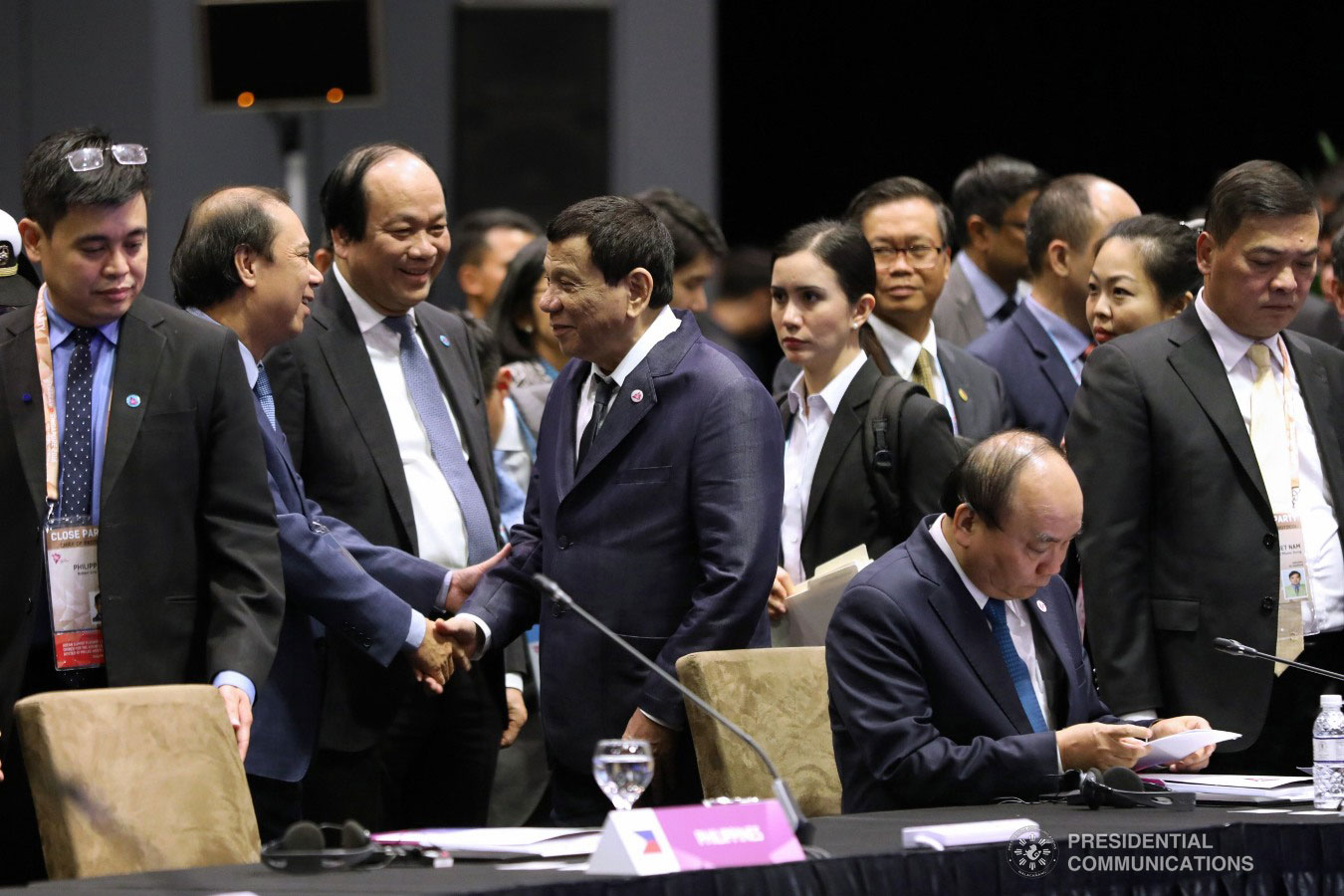 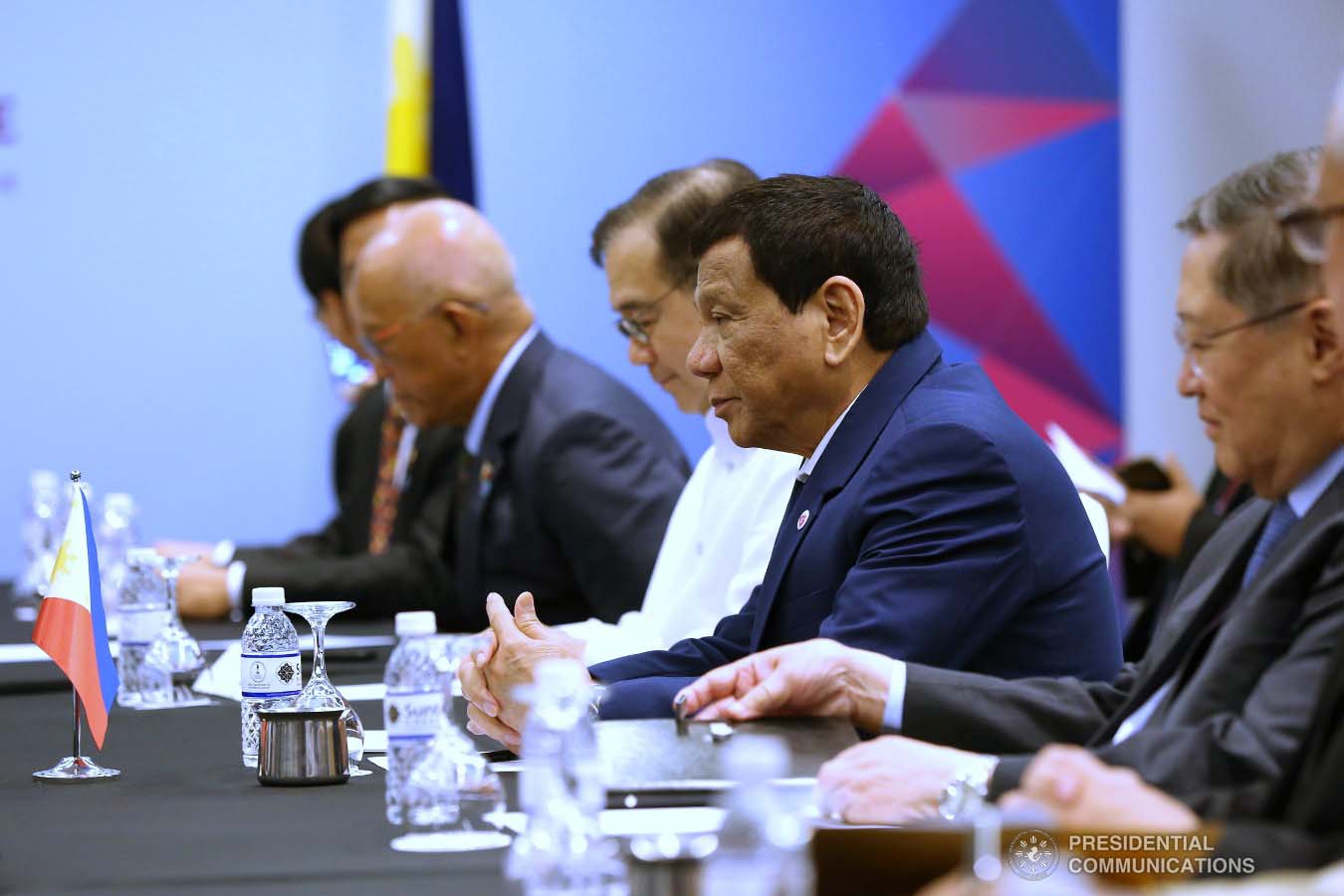 President Rodrigo Roa Duterte listens to the discussions during the bilateral meeting with Japan at the Suntec Convention and Exhibition Centre in Singapore on November 15, 2018. KARL NORMAN ALONZO/PRESIDENTIAL PHOTO 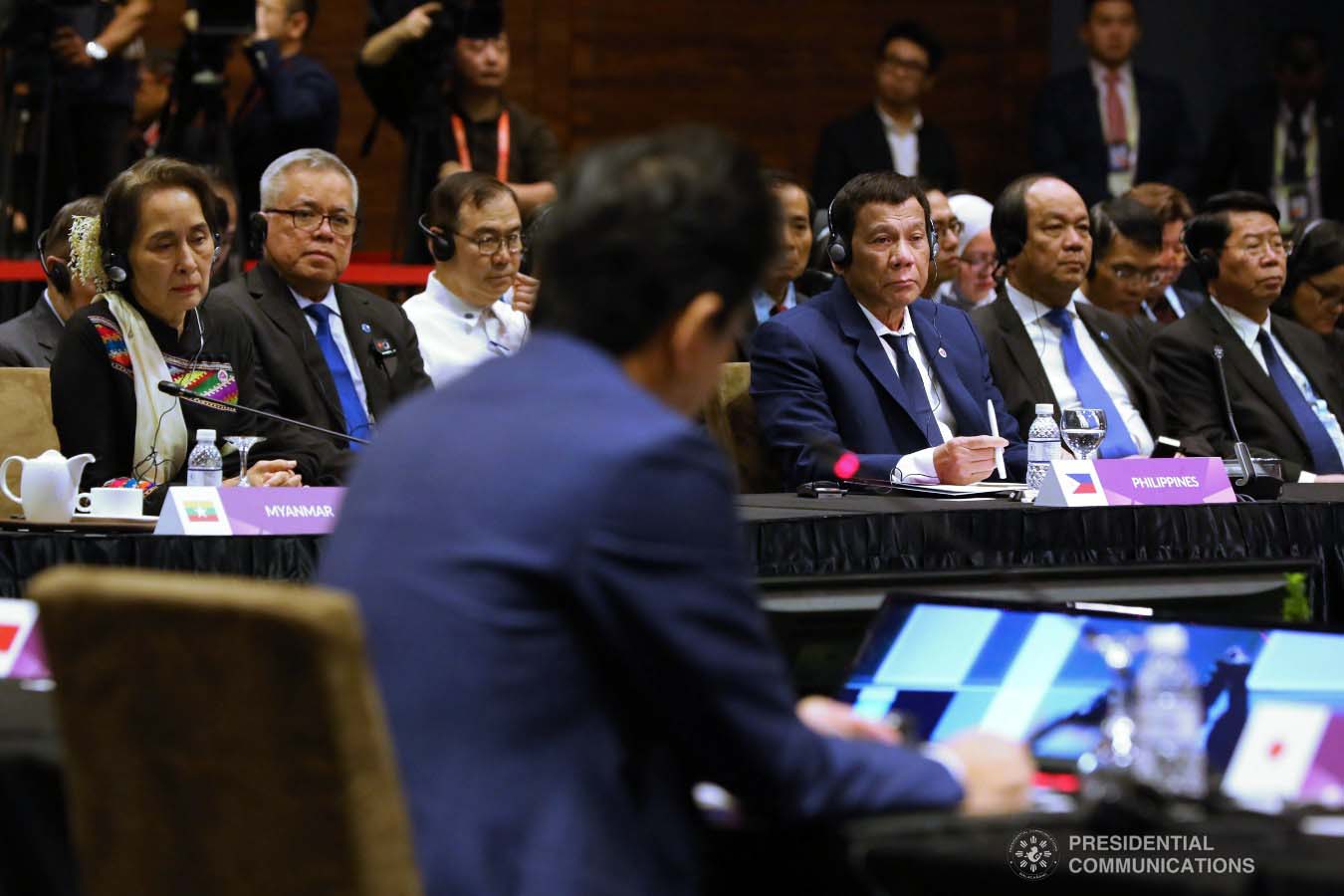 President Rodrigo Roa Duterte joins other leaders from the Association of Southeast Asian Nations (ASEAN) member countries as well as Japan, People's Republic of China, and Republic of Korea during the 21st ASEAN Plus Three (APT) Summit at the Suntec Convention and Exhibition Centre in Singapore on November 15, 2018. TOTO LOZANO/PRESIDENTIAL PHOTO 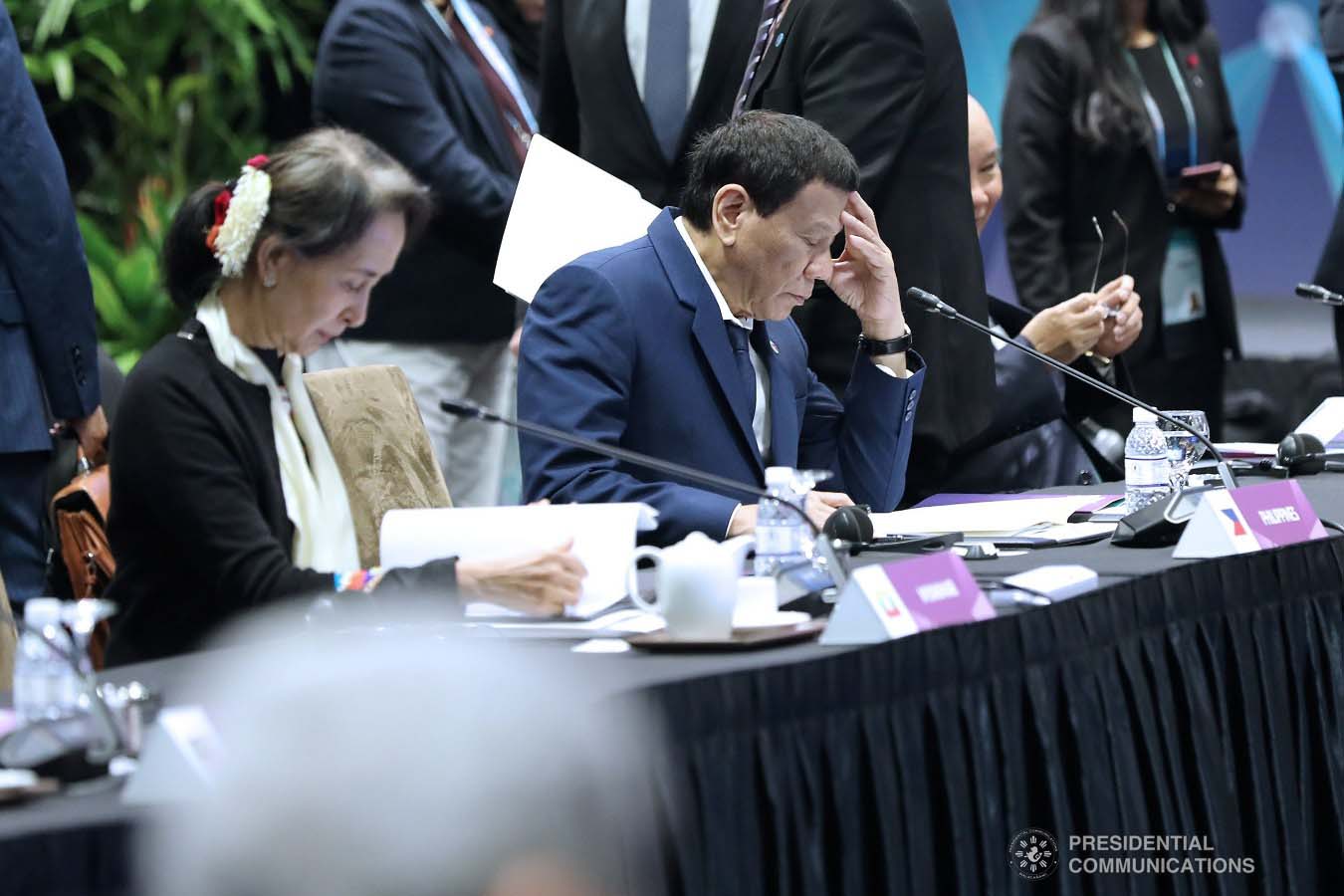 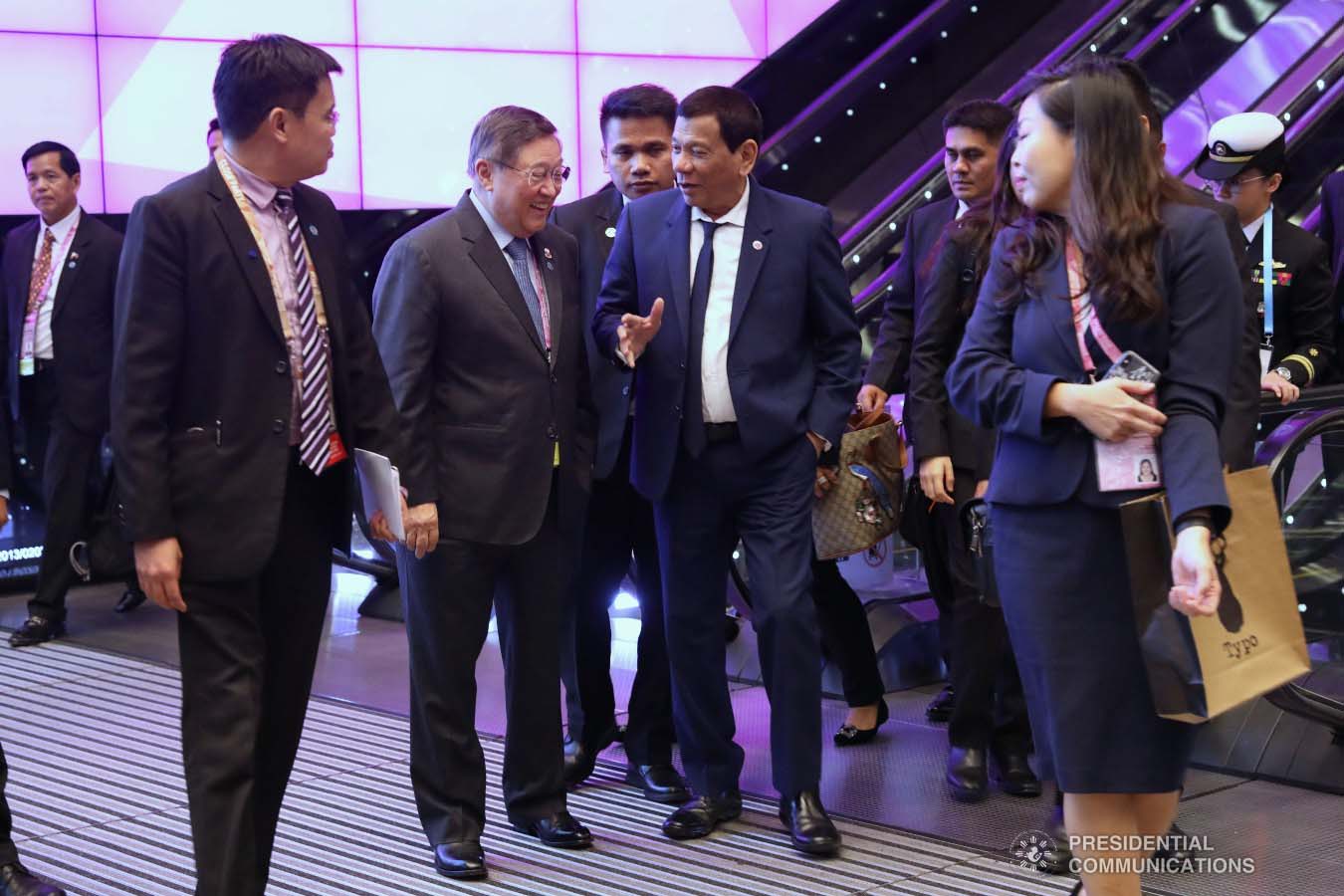 President Rodrigo Roa Duterte chats with Finance Secretary Carlos Dominguez III prior to the bilateral talks with Japan at the Suntec Convention and Exhibition Centre in Singapore on November 15, 2018. KARL NORMAN ALONZO/PRESIDENTIAL PHOTO

Singapore — President Rodrigo Roa Duterte on Wednesday, November 14, highlighted the improvement in the security cooperation in counter-terrorism and the support for a drug-free Association of Southeast Asian Nations (ASEAN).

In his intervention for the 21st ASEAN-Japan Summit here, the President noted that the engagements between the regional bloc and Japan continue to broaden through collaboration in innovation and in helping micro, small, and medium enterprises (MSMEs) connect to the global value chain.

“There is greater security cooperation in counter-terrorism
and a wider support for a Drug-Free ASEAN,” the President told his fellow leaders during the summit held at Suntec Convention and Exhibition Centre.

According to the President, there is also an intensified interaction between the ASEAN Coordinating Centre for Humanitarian Assistance and the ASEAN Centre for Biodiversity.

“We look forward to the anticipated signing of the ASEAN-Japan Technical Cooperation Agreement to further strengthen our people-to-people exchanges,” he said.

“As active partners for greater peace, security, and stability in Southeast Asia, we remain open to discussions on the regional structure, which include the Free and Open Indo-Pacific Strategy, with a view to enhancing ASEAN centrality,” President Duterte said.

He expressed confidence that Viet Nam would further “build on ASEAN-Japan relations based on mutual trust and heart-to-heart understanding.”

The Chief Executive also took the opportunity to express gratitude to Japan for its “solidarity and offer of assistance after Typhoon Mangkhut hit the Philippines in September 2018.”

He said nations, especially those in Southeast Asia, continue to be vulnerable to climate change and natural disasters.

“This is one area of major concern shared by both ASEAN and Japan,” he said.

“We note how Japan quickly recovered from the impact of Typhoon Jebi. This is a testament to Japan’s remarkable resilience and admirable ability to build back stronger communities,” he said, noting that this is an area where ASEAN and Japan can clearly benefit from greater collaboration and sharing of best practices.

The President also mentioned the Fukuda Doctrine during his intervention.

“With its positive engagement anchored firmly on the Fukuda Doctrine, Japan continues to make inroads and break new grounds for cooperation with ASEAN,” said the President .

He cited that the Fukuda Doctrine was the blueprint that ushered in a new era of more meaningful partnerships between Japan and ASEAN.

“This year, we honored the significance of the Fukuda Doctrine with the unveiling of a memorial marker at Manila Hotel where then Prime Minister Takeo Fukuda made the historic pronouncement that redefined Japanese diplomacy in 1977,” he said.

The two leaders met shortly before 3 p.m. at the Suntec Convention and Exhibition Centre.

The Prime Minister of Singapore expressed gratitude to the Philippine leader “for the chance to chat.”

President Duterte, for his part, said he was honored to meet with the Prime Minister.

“We are grateful for Singapore’s able chairmanship of ASEAN, which has brought us closer to achieving a resilient and innovative community,” the President said during his intervention at the 33rd ASEAN Summit working dinner. ###PND