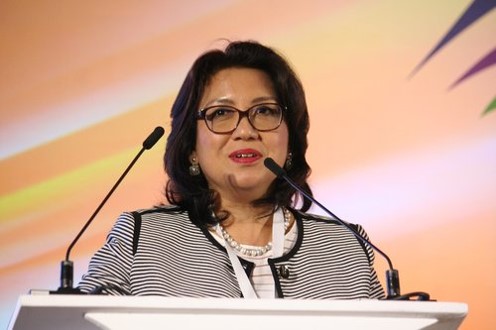 SINGAPORE 05 October 2018 – In recognition of her achievements on disarmament matters at the United Nations and her work at the ASEAN Secretariat, a Filipina professor was promoted as a full professor in one of Singapore’s most prestigious universities.

Filipina educator Dr. Mely Caballero-Anthony was elevated to full professor at the Nanyang Technological University (NTU). She currently teaches at the S. Rajaratnam School of International Studies (RSIS) of NTU, and is also the Head of NTU’s Center of Non-Traditional Security Studies (NTS).

“The Embassy is proud to have another global Filipina making her mark in Singapore, which is among the centers of academic excellence in Asia and in the rest of the world. Singapore hosts a number of Filipino academicians teaching and conducting research in top institutions, such as the National University of Singapore (NUS) and NTU,” Ambassador to Singapore Joseph Del Mar Yap said as he congratulated the Filipino professor on er achievement.

In his speech at the at the Times Higher Education World Academic Summit 2018 held at NUS on 26 September 2018, Singapore Education Minister Ong Ye Kung specifically cited Dr. Caballero-Anthony: “Recently, Mely Caballero Anthony from NTU was promoted to Full Professor for her work in chairing the United Nations Advisory Board on Disarmament matters in 2016, and having served as the Director of External Relations at the ASEAN Secretariat. She was recognised for her work outside of the university and was given a full professorship.”

The Philippine Embassy in Singapore previously collaborated with Dr. Caballero-Anthony and NTS in July 2017 for a panel discussion on “Women, Peace and Security in Southeast Asia” held at RSIS in conjunction with the Embassy’s Gender and Development program.