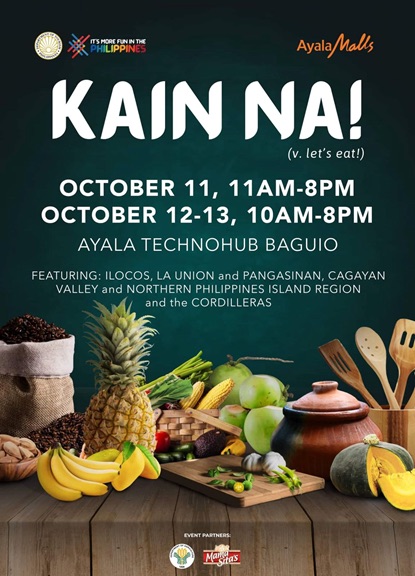 “It is now the time for our regions up north to showcase their culinary prowess at the Kain Na! North edition,” DOT Secretary Bernadette Romulo-Puyat said.

Aside from food exhibitors and local chefs, regional farm tourism associations, farm owners and operators supported by partner agency, the Department of Agriculture (DA) will also grace the three-day event.

“We are ever thankful to our partners and exhibitors in supporting our advocacy of promoting our food and farm tourism,” Secretary Puyat added.

While chefs from the Ilocos Region including Chef Ruben Ignacio will prepare Urduja’s Seafood Pinakbet and Pigar-Pigar Skewers, Chef Xavier Mercado will cook Okoy Tikyosko.  On the other hand, Chefs Jasper Juliane Alinio and Yason Yadao Tolentino will whip up Rosangis Pasta, Poqui-Poqui and Pinakbet.

Organized in partnership with the Ayala Malls, Kain Na! will be held in various cities in Luzon, Visayas and Mindanao on November 22-24 at Ayala Malls Centrio, Cagayan de Oro, with Regions 9 (Zamboanga Peninsula), 10 (Northern Mindanao), 12 (SOCCSKSARGEN), and 13 (Caraga); and, ‪on December 6-8 at Ayala Malls, The Strip, Iloilo City, with Region 6 (Western Visayas).