Proving that the agency can reach its target of total investments in 2022, the Philippine Economic Zone Authority (PEZA) has over-achieved beyond the 6-7% target for 2022.

“We are proud to report that PEZA has approved a total of 198 projects from January to December 2022 which are expected to bring in P140.7 billion worth of investments. This is a 103.03% increase compared to the same period last year,” said PEZA OIC Chief Tereso O. Panga on Monday.

He explained, “At the rate we are going now, PEZA has achieved this year the level of annual investments approved in 2018. That means that the country’s ecozones and high-performance investments are back to the pre-pandemic, even surpassing the 2018 level. Indeed, the economic and political climate are improving under the PBBM administration and we hope to sustain very good performance as we prepare for the upturn in the economy and our transition to upper-middle income status.”

The P140.7 billion investment approval of PEZA in 2022 exceeds its four-year annual performance with P140.2 billion last recorded in 2018 followed by a constant yearly decline in investments until 2021 due to the pandemic, Russia-Ukraine war, and the ensuing global supply chain disruptions.

The PEZA interim chief noted that “With the increasing GDP growth rate of the Philippines, we can expect more FDIs to register with PEZA. What is important is we keep building and sustaining the confidence of investors and the country’s competitiveness in investment promotions and facilitations.” 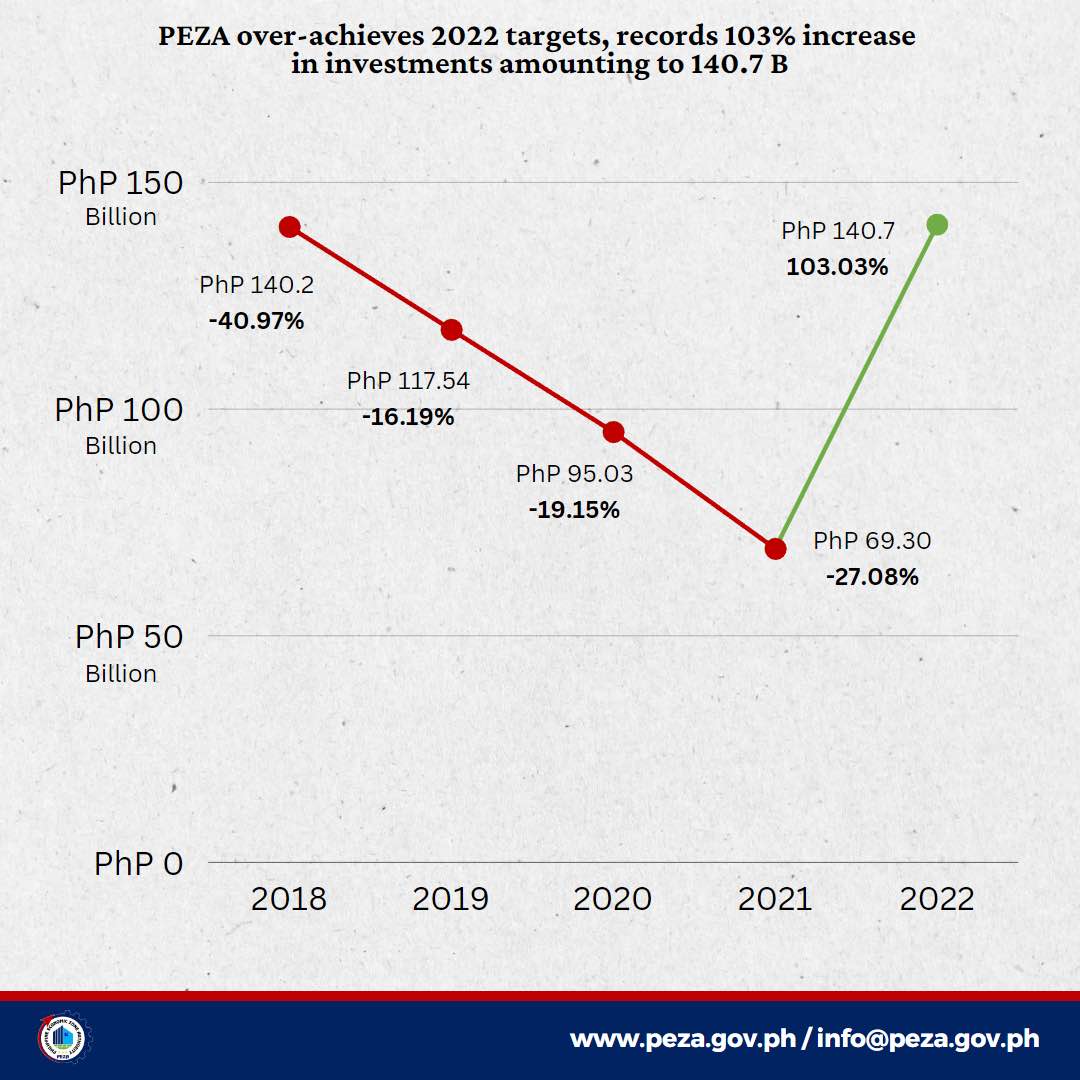 The total comes as the PEZA Board, which was presided by DTI Secretary and Chairman Alfredo Pascual, approved last December 15 about 13 new and expansion projects expected to bring in P83.651 billion of investments.

These projects will be located in the Taguig City, Pangasinan, Cavite, Batangas, Laguna, Cebu, and Negros Occidental.

In the first State of the Nation Address of President Bongbong Marcos Jr., he highlighted the strategic importance of ecozones and the need to promote productivity-enhancing investments, which are best hosted by ecozones under PEZA.

Panga explained, “We cannot register productivity-enhancing investments if we do not have the ecosystems to provide our investors so that they can be viable with their operations in the Philippines.”

Several experts also voiced their support for strengthening the country’s ecozone program due to its multiplier effects on the regions and the economy.

“Let the zones flourish and grow. The present administration of PBBM must take a closer focus on enhancing the strength of our special economic zones. There’s so much untapped potential in this sector,” said Philippine Star columnist Ariel Nepomuceno.

Meanwhile, Cong. Emigdio Tanjuatco III of the House Committee on Trade and Industry stated that “Evidently, economic zones in the Philippines have risen to become an important export promotion tool and economic policy instrument to attract foreign direct investments, leading to job creation, export earnings, elimination of trade barriers, and revenues for both the national and local government.” 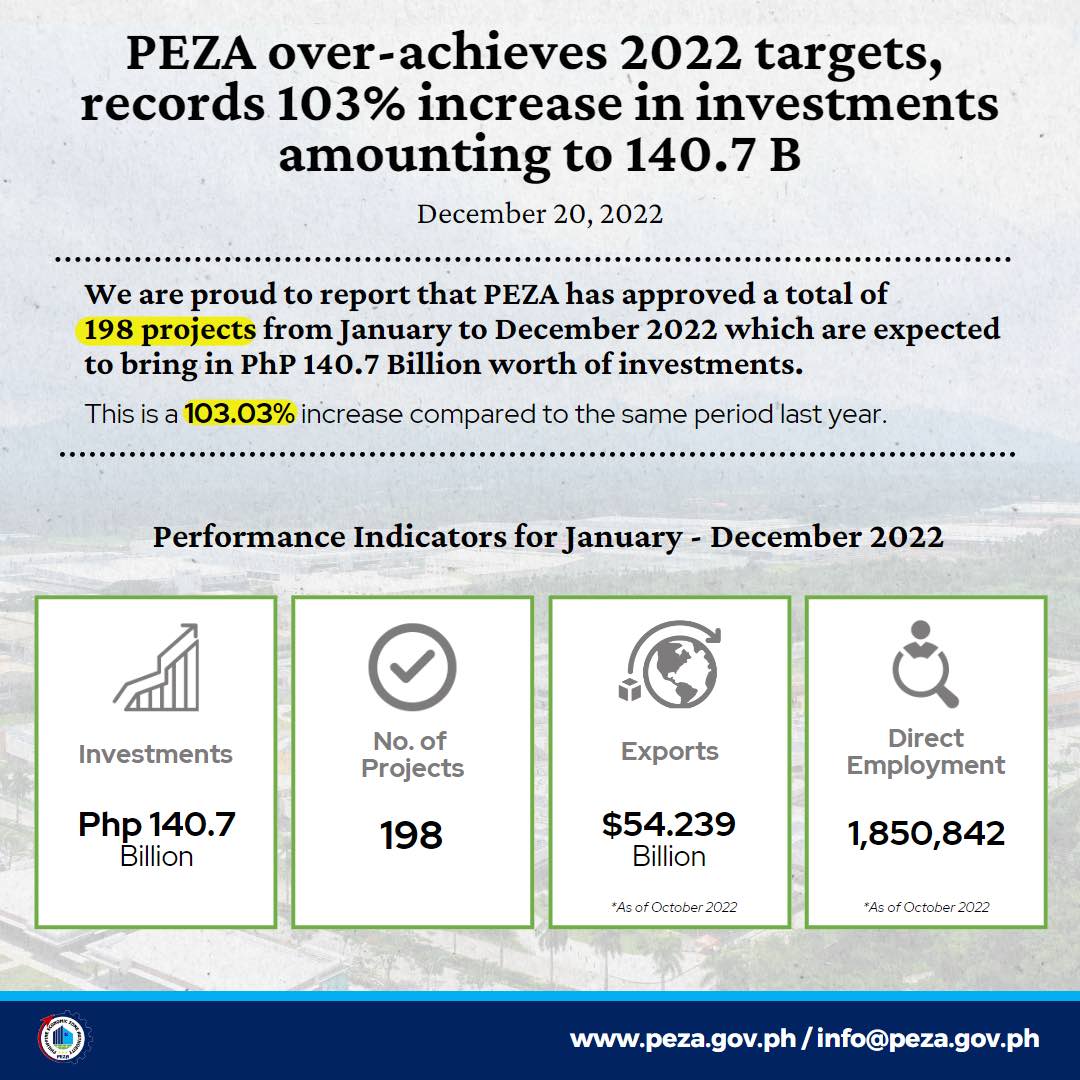 With the PBBM administration’s economic plan that seeks to position the country as the smart destination choice for investments, PEZA is strengthening its investment promotion and facilitation efforts through the ecozone program.

“We are also actively engaging various government agencies and industry partners among others to aggressively promote the Philippines. We need to get our acts together; we cannot do this alone. By doing that, we can achieve regulatory coherence and enhance further ease of doing business in the ecozones,” explained Panga.

Echoing this, National Economic and Development Authority (NEDA) Secretary Arsenio Balisacan stated that there is a good basis for the development of the zones in the country, but it is necessary to ensure that resources are available to make it a viable destination for investors.

“This needs a ‘whole-of-government approach’ in ensuring a healthy industry consisting of ‘effective and cost-efficient zones,’ without leaving their development solely to the Philippine Economic Zone Authority (PEZA),” explained the NEDA Chief.

In the case of PEZA, the ecozones continue to exist with great success. Except for the four (4) public ecozones, the rest of the 415 ecozones nationwide are mostly owned, developed and managed by the private sector. PEZA through DTI Secretary Pascual has endorsed a total of 16 ecozone developer projects for proclamation by the President with a total capital investment of P18.032 billion.

Nevertheless, OIC Panga assured that despite the hurdles, “PEZA remains committed to performing its sworn mandate and attracting the much-needed strategic and big-ticket investments to the country and contribute to PBBM’s goal for the country’s transition to the upper middle-income economy within his term. Let us continue to make it happen in the Philippines!”

—
Stay updated with news and information from the Department of Trade and Industry by visiting their website at dti.gov.ph.

Digital transformation a top priority for small and medium enterprises