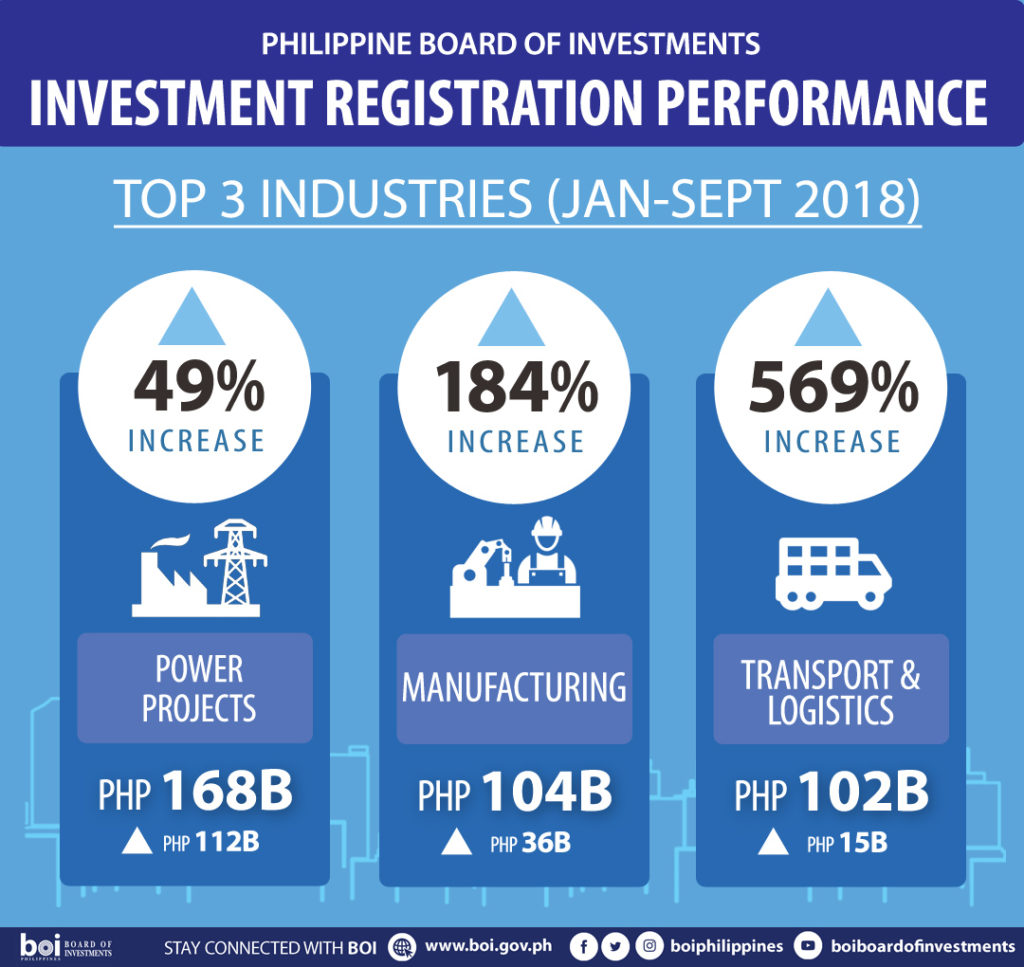 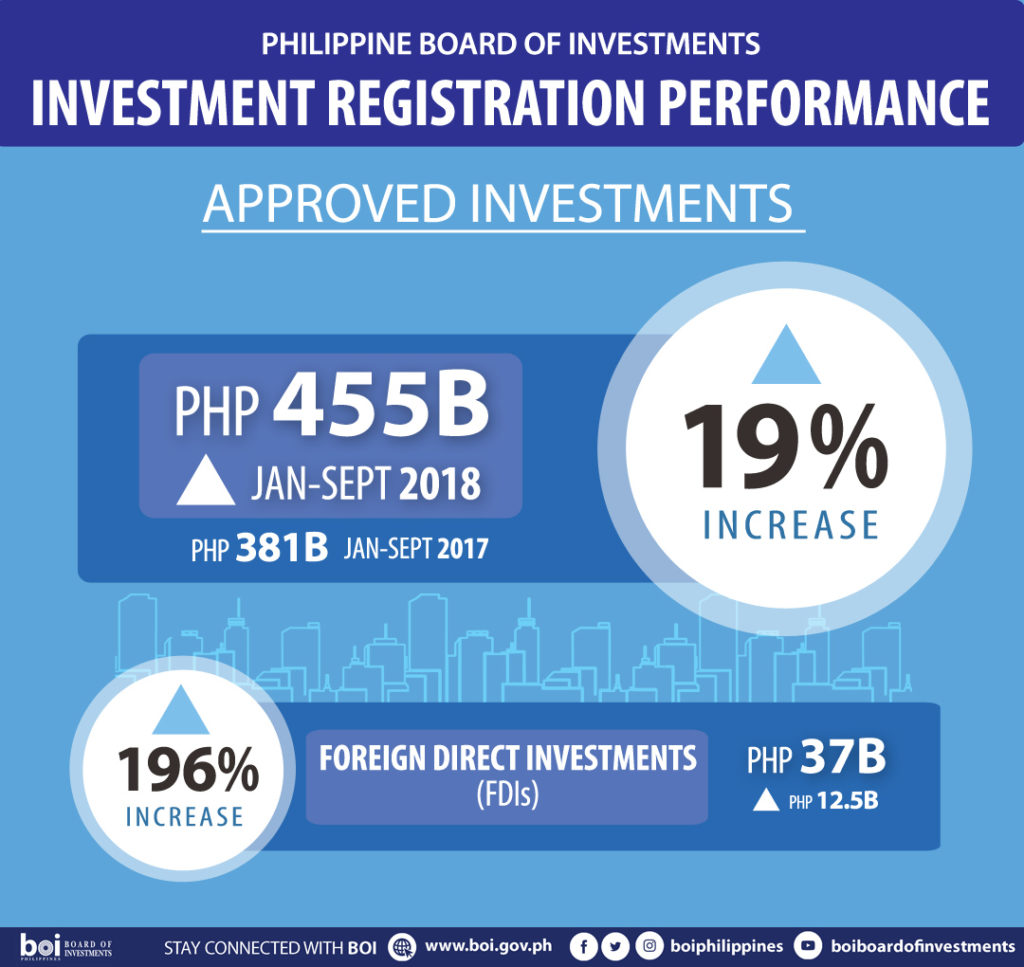 The Philippine Board of Investments (BOI), the country’s primary industry development and lead investment promotion agency, posted investment approvals worth Php454.8 billion for the first nine months of 2018, a 19.3 percent increase compared to the same period last year where it reached Php381.2 billion.

“Investor confidence in the country remains high. The Philippines continues to attract more investments because the economy is strong enough to withstand challenges on both the domestic and international fronts,” Trade Secretary and BOI Chairman Ramon Lopez said.

He said that with the Implementing Rules and Regulations (IRR) of the expanded Ease of Doing Business Act soon to be out and the roadshows of the Strategic Investment Priorities Plan (SIPP) already in full swing, the government will able to sustain its gains as “we continue to enact the necessary reforms and programs that would further ease business processes and make business more efficient which creates more jobs for our countrymen.”

“After the record-breaking investment approval figure of Php617 billion in 2017, the agency is still pretty confident of hitting its investment target of Php680 billion for this year. As of September, we are already surpassing expectations with already two-thirds of our year-end target and the rest of the year should be pretty exciting and challenging due to the deluge of big projects in the pipeline. We are just exercising due diligence to ensure that these projects comply with the necessary requirements,” Trade Undersecretary and BOI Managing Head Ceferino Rodolfo said.

Approved foreign direct investments (FDIs) of the agency are also on the upswing as it reached Php37 billion as of September 2018, a 196 percent surge from just Php12.5 billion the same period last year.

“Our FDIs are clearly feeding off on the momentum of actual FDIs as monitored by the Bangko Sentral ng Pilipinas (BSP),” Undersecretary Rodolfo said as BSP figures showed record FDI inflows of US$6.7 billion as of July 2018, a 52 percent improvement from US$4.4 billion in January to July 2017.

The power-renewable Energy sector continued its strong momentum to top all sectors with Php168 billion in investment approvals as of September, up 49 percent from last year’s Php112.8 billion. The manufacturing sector sustained its robust outlook with Php103.8 billion, a 185 percent leap from just Php36.5 billion in 2017. The transportation and storage sector also continued on a roll with Php102 billion, a 568 percent jump from last year’s Php15.3 billion in the same period. The human health and social work activities sector which include hospitals obtained the highest growth with a 1,502 percent rise to Php3.4 billion from just Php210 million last year.

Pulangi Hydro Power Corp.’s Php38 billion project sustained the strong performance of the power sector as it is putting up a 250 MW Hydroelectric Power Plant in Bukidnon. The manufacturing segment was bolstered by the approval of Petron Corporation’s Php82 billion investment in the Condensate Processing Complex Project in its refinery in Limay, Bataan and the Php62.6 billion Liquefied National Gas (LNG) terminal project of FGEN LNG Corporation in Batangas City with a capacity of 5 million tons per year. Other manufacturing projects at the forefront include the PHp1.8 billion investment of Bio Renewable Energy Ventures in producing coconut methyl ester (CME) and glycerin in Misamis Oriental, the Php151 million project of Biotech Farms, Inc. for the production of fiber egg trays in South Cotabato and Conibo Organics, Inc.’s Php60 million project as a new export producer of coconut noir in Camarines Sur.

Transportation and Logistics was propelled by the acquisition of Philippine Airlines, Inc. of six Airbus A321neo aircraft worth Php19 billion to service international routes and the Php11.8 billion investment of Cebu Air, Inc. in buying five Airbus A321ceo units to fly local and international routes under its Cebu Pacific brand. Other projects giving the sector further boost are the six projects of domestic shipping operator Shogun Ships Co. Inc. worth a total Php2.2 billion covering four passenger and cargo vessels with 1,021 gross tonnage (GT) each, a 1211 GT tanker and a 55GT small passenger ship to service routes in Sorsogon, Samar and Masbate. Southwest Gallant Ferries Inc. is also going to operate a Php750 million 2,944 GT passenger ship to service the Batangas-Caticlan routes. VS Grand Ferries Corporation is also scheduled to inaugurate a Php208 million high-speed 281 GT Catamaran passenger vessel to service the Samar and Cebu routes this month.

New hospitals emerge while others expand on the back of strong wellness demand in the provinces. Allegiant Regional Care Hospitals, Inc.’s new Php710 million Level 2 facility in Lapu-Lapu City, Cebu is slated to operate this month with a staff of 375 while Allied Car Experts (ACE) Medical Center’s new Php1 billion level 2 hospital in Bohol is scheduled to open in November 2018 with a manpower of 364. Healthcaremax Inc.’s Php658 level 2 hospital unit in Batangas will also open this month with 370 personnel. Meanwhile, Good Shepherd Hospital is investing PhpPhp362 million to expand its hospital in Panabo City, Davao del Norte as commercial operation will begin January 2019 with an additional 191 personnel.

A year after Marawi liberation, DSWD continues to help survivors