“Sining Filipinas” is the brainchild of Binhi ng Lahi Philippine Folk Dance Troupe or Binhi, a Calgary-based cultural group formed in 2017.  In staging “Sining Filipinas,” Binhi aims to continue to promote the beauty of Philippine culture and traditions through education and dance performances even during the pandemic. 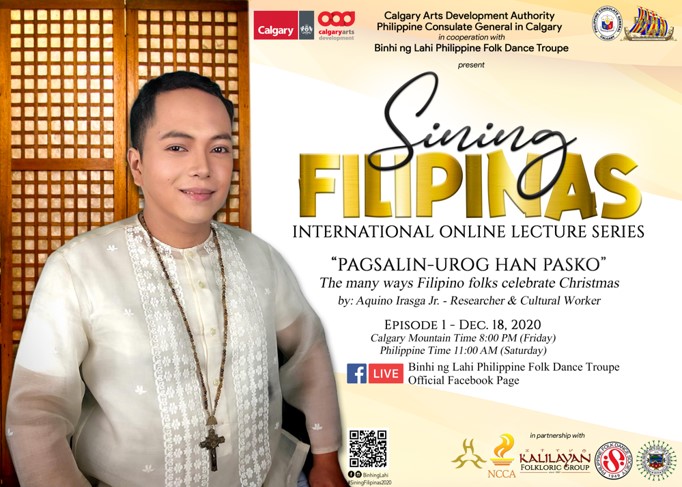 Mr. Noel Lloren, Binhi’s Program Director, said that his group would like to contribute to the efforts of many Filipino cultural workers to introduce Philippine culture to the world as part of the global community.

The two main sponsors of “Sining Filipinas” are the Philippine Consulate General in Calgary and the Calgary Arts Development while the event partners include the Cultural Center of the Philippines, National Commission on Culture and Arts, Kalilayan Folkloric Group, Philippine Folk Dance Society, and the Provincial History, Arts, Culture and Tourism Office – Bulacan (PHATCO).

“The concept of Sining Filipinas is very much aligned with the Consulate General’s own cultural diplomacy program and we are pleased to collaborate with Binhi ng Lahi in promoting this meaningful project,” Philippine Consul General to Calgary Zaldy Patron said in describing the Consulate General’s support for the event. “I encourage the Filipinos and the Canadians in Alberta and Saskatchewan to watch and listen to these online lectures to know more about the Philippines and the Filipinos from a cultural perspective,” he added.

Mr. Aquino Irasca, Jr., researcher and cultural worker, gave a presentation on the history of Christmas celebration in the Philippines and how it is celebrated in various parts of the country.

Viewers are requested to follow the Facebook pages of Binhi ng Lahi Folk Dance Troupe and the Philippine Consulate General in Calgary to watch these episodes. END